The Perils of Peace 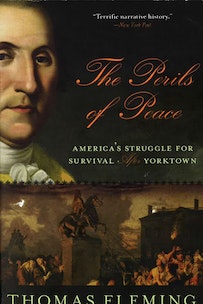 The Perils of Peace: America's Struggle for Survival After Yorktown by Thomas Fleming

Our last Read the Revolution featured the risky decision the Americans and French made to launch an all-out, combined attack against British General Cornwallis's position at Yorktown, Virginia in 1781. This yielded a stunning victory that we now recognize as a turning point in the American Revolution. Yet it took two years before the Treaty of Paris ended the war. Thomas Fleming's book The Perils of Peace: America's Struggle for Survival After Yorktown examines that two-year period, with America, Britain, and France all facing political, financial, and societal tumult. In this excerpt, Fleming describes the political reaction in Britain immediately after Cornwallis's surrender that—for the moment—resulted in a determination to continue fighting with a new strategy.

If [King] George III had known the disarray into which the American Revolution was stumbling, he would have been a very happy man. Instead, the weeks after the news of Yorktown reached England on November 25, 1781, were full of worry and anxiety for the patriot king.

Neither His Majesty nor the hardliners in the North ministry were in favor of continuing the American war with the same strategy—invading the continent at crucial points and smashing any and all resistance with masses of infantry and swarms of cavalry. That was the illusory war of 1776, which had produced little except frustration and defeat. With France in the war, supplying the Americans with money and weapons, there was no hope of totally subduing the fractious rebels. Moreover, the French had stunned the English by achieving naval superiority in 1781 and were threatening precious British possessions in the West Indies and India.

George III asked [British Secretary of State] Lord George Germain to come up with a new plan. [Germain] produced a memorandum which proposed retention of Savannah, Charleston, and New York. He argued that in all three ports, the rebel governments would be unable to stop profit-hungry Americans from trading with British merchants—an already widespread practice. Simultaneously, the two southern ports would be invaluable as staging sites from which to wage war in the West Indies. Troops could be transported to them during the hot, unhealthy summer months, when mortality among white men in the islands was high. Meanwhile, the utmost effort would be made to regain naval superiority in North America and the West Indies.

Some ships could be used to blockade or attack rebel-held ports, further crippling the already wounded American economy. Ships could also be used to deliver weapons and ammunition to loyalists and Indians elsewhere in North America, particularly around the port of Penobscot. Germain was convinced that a great many Americans had become disillusioned with the Continental Congress and the French alliance, and were ready to fight for the king is they could be assured of strong support.

Extending this idea, [Germain] recommended operations to reoccupy Rhode Island and seize Delaware, which had numerous loyalists, would be easy to defend, and could provide 'plenty of provisions for the subsistence of an army.' Finally, he argued that the 'colonies appear to be under the control of their general' rather than Congress, and [General] Washington was now closely connected to the French, as the Yorktown victory made clear. That meant there was a good chance that the Americans' 'natural aversion to the French nation' might eventually incline them to return to their connections with England 'if we remain in a situation to receive them.'

The memorandum was submitted to the cabinet and sporadically discussed without much enthusiasm during the month of December. Nevertheless, it had considerable influence on [British Prime Minister] Lord North's thinking about the war. This became evident on December 12, 1781, when Sir James Lowther, an independent country gentleman who controlled nine parliamentary seats in the north of England and had long supported the government, introduced a motion that the war in America 'has proved ineffectual.' Lowther called for a vote on whether further attempts to reduce the Americans to obedience should be abandoned.

Lord North responded to this motion with a combination of combative denunciation and consummate vagueness. If the motion passed, North said it would mean the abandonment of valuable territory held by the British army in America, which would almost certainly be needed as bargaining chips if England hoped to achieve an honorable peace. Abandonment would also make it impossible for His Majesty's army and navy to continue the war against France and Spain in that part of the world. Was that any way to deal with these inveterate enemies, whom Lowther had admitted were powerful foes?

Switching his tone, North launched a rambling discourse on 'the future mode of the prosecution of the war.' He hinted that the government had plans but asked the members to consider whether it was 'either wise or politic for a man in high and responsible office' to say too much about them. He reiterated that he did not think it would be wise to continue the American war 'on the same scale' as they had fought it in the past. He hoped this would satisfy gentlemen such as Mr. Lowther who feared continuing it in the previous mode would make England easy prey to France, Spain, and her latest European enemy, Holland...

After three days of furious debate, the opposition... summoned every available vote to support Lowther's motion. The king's supporters were equally energetic. In a roll call taken at 2 a.m., the motion failed, 220 to 179. North had managed a seemingly impossible feat—he had united the three groups into which the king's backers were splitting: those who remained determined to subdue the Americans one way or another, those who wanted to switch Britain's main effort to an offensive against France and Spain, and those who were ready to abandon America eventually, but not for the moment, because it might lead to a humiliating peace."