The Martyr and the Traitor 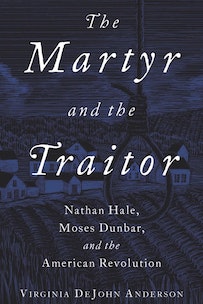 The Martyr and the Traitor: Nathan Hale, Moses Dunbar, and the American Revolution by Virginia DeJohn Anderson

Virginia DeJohn Anderson’s book, The Martyr and the Traitor: Nathan Hale, Moses Dunbar, and the American Revolution, adds complexity to our understanding of choosing sides in the Revolutionary era. It was not simply differing opinions on liberty that divided Americans, but religious persuasions, family ties, economic circumstances, and friendships influenced their decision making. DeJohn Anderson shows this through a dual biography of two Connecticut men: the famous Revolutionary Nathan Hale and the less-well-known Loyalist Moses Dunbar.

Hale, who grew up in a prominent Connecticut family and studied at Yale, contrasted with Dunbar, a farmer and Anglican convert in a Congregationalist community who struggled economically during his adult life. DeJohn Anderson’s discussion of each man’s life contextualizes their loyalty decisions within the social, political, and economic situation of Connecticut during the 1760s and 1770s. Both men threw their hats in the ring of the Revolutionary War, but on opposing sides. Ironically, even though Hale and Dunbar had their differences, both men’s lives ended at the gallows in the early stages of the war because of their subversive activities against their enemies. Hale delivered his most famous, patriotic statement (remembered by one British officer) just before his execution for spying on behalf of George Washington’s army: “I only regret, that I have but one life to lose for my country.”

The following excerpt builds suspense as Hale began his mission to gather intelligence about the British Army in New York. Hale’s arrest and hanging for espionage soon followed.

The Americans’ crushing defeat in the Battle of Long Island made Washington more desperate than ever for reliable intelligence about British troop movements, supply lines, and armaments. He instructed two of his generals, William Heath and James Clinton, to try to discover the enemy’s intentions, exhorting them “to exert yourselves to accomplish this most desirable end, leave no stone unturn’d, nor... stick at expense” in their endeavors. There was talk of trying to bribe or even kidnap loyalists who might have valuable information. Some informers came forward voluntarily, but their motives demanded careful scrutiny lest the Continental Army be led into a trap. Because none of these expedients was wholly satisfactory, Washington decided to find a trustworthy man willing to go behind British lines and spy on the enemy.

Washington may have approached Knowlton directly or used Heath or Clinton as an intermediary, to see if one of his rangers would undertake this exceedingly hazardous mission. Because of the danger and the taint of dishonor associated with espionage, no soldier could be ordered to do it. Washington needed a volunteer. Knowlton discussed the plan with his junior officers the scheme was far too risky to employ a higher-ranking individual and one of the newest members of his unit agreed. Though his record of military accomplishments was admittedly thin, Captain Nathan Hale was young, intelligent, and energetic. From Knowlton’s perspective, these characteristics gave Hale at least a modest chance at success. If he failed, the army would be no worse off than it already was, and there were plenty of young officers who would happily join the rangers as Hale’s replacement.

William Hull was horrified when his friend who ought to have kept the matter secret told him of the plan. Years later, Hull recalled with genuine anguish his failure to dissuade Hale from accepting a mission of “doubtful” propriety that “was not in keeping with his character.” Hale’s nature was “too frank oand open for deceit and disguise,” Hull insisted, “and he was incapable of acting a part equally foreign to his feelings and habits.” He would almost surely fail, but even if successful he would “stain [his] honour by the sacrifice of integrity.” Hale conceded that the enterprise was fraught with peril, but according to Hull, countered that this was his chance, after more than a year in the army, to render “material service” to his country. He longed to be “useful” and argued that “every kind of service, necessary to the public good, becomes honourable by being necessary.”

Moreover, despite Hull’s misgivings, Hale was certain that he could “act a part.” Just a few years earlier though it must have seemed a lifetime ago he had taken the stage during the Linonia Club’s boisterous anniversary celebrations and he had not forgotten the accolades his performances received. Collegiate experiences meant to establish Hale’s credentials as a British gentleman could now be put to a very different use. His ambition to excel, to earn the approbation of others, had not diminished. He designed for himself a role that he knew he could play, for he had already performed it. A plain brown suit and broad-brimmed hat would comprise his costume. He would travel to Long Island in the guise of a schoolmaster, carrying his Yale diploma as evidence of his qualifications. He could record any information he gathered in Latin, a language incomprehensible to all but the educated few. This would be the grandest performance of his young life. The stakes were dangerously high but, if successful, he would contribute immeasurably to the nation’s cause. Hale told Hull that such an outcome would be reward enough; he did not expect money or military preferment upon his safe return. But he surely hoped to impress Colonel Knowlton and General Washington with his ingenuity and devotion to his country. Once the mission was completed, he could entertain Hull and other soldier-friends with tales of his adventures, and fill letter after letter with details to thrill distant correspondents.

Leaving camp in his uniform so as not to attract attention, Hale explained to Asher Wright only that he would be gone for a while. The waiter was to take care of Hale’s possessions and move them if the army relocated during his absence. Just a few trustworthy men, whose help Hale needed, knew of the captain’s real mission. One confidant was Stephen Hempstead, a sergeant in Hale’s company, who joined him on a circuitous journey from Harlem Heights to the coastal Connecticut town of Norwalk. Another was Captain Charles Pond, whose armed sloop carried Hale over to Long Island, leaving him ashore somewhere around Huntington. Before his departure from Norwalk, Hale changed into his brown suit and deposited his uniform, commission, other papers, and silver shoe buckles (too grand for an ordinary schoolmaster) with Hempstead. The sergeant was to wait in Norwalk for Hale’s return and accompany him back to camp to deliver his precious information to his superiors.

Hale had no desire to stay on Long Island any longer than necessary. He had to pass through Queens County, a place crawling with loyalists ready to ingratiate themselves with British authorities and avenge festering grievances against local Whigs. Loyalist refugees from Connecticut also poured onto Long Island, increasing the chances that Hale might encounter someone who recognized him. With Britain seemingly poised to win the war, some discouraged revolutionaries in the area had accepted Howe’s offer to pardon those who swore allegiance to the Crown; such men might be induced to betray their erstwhile compatriots. Throughout the countryside, disaffected neutrals upset by abuses perpetrated by both sides in the conflict mistrusted everyone. Any stranger wandering from town to town would arouse suspicion.

To his dismay, by the time Hale reached Long Island much of the British army had relocated to Manhattan. Unwilling to abandon his mission and disappoint his superiors, he decided to follow the redcoats across the East River, prolonging his risky subterfuge. He got to Manhattan during a spell of warm and sunny weather during which he strolled around the British encampments, furtively taking notes and making sketches. Deployed around the lower part of the island were three battalions of light infantry, four of British grenadiers and three more of Hessians, along with several artillery units. Guards had been posted at the five-mile marker up from the island's southernmost tip. Hale watched men set up tents and survey the extensive fortifications the Americans had so recently abandoned. British troops were also busy making thousands of fascines long bundles of brushwood used for filling in ditches and constructing roads and earthworks. Droves of deserters from the American army reportedly arrived daily. After a few days of observation, Hale chose not to tempt fate any longer. He carefully folded the papers with his information and tucked them in the inner soles of his shoes. Then he headed back to Long Island for his rendezvous with Captain Pond.