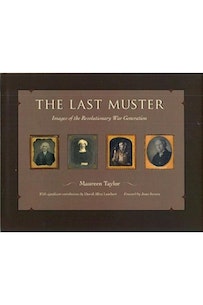 The Last Muster: Images of the Revolutionary War Generation by Maureen Taylor

At the time of the invention of photography in 1839, America’s aged Revolutionary generation was quickly passing away. Historians and photographers sought to capture the images and stories of veterans and those who lived through that momentous period. Author Maureen Taylor’s book, The Last Muster: Images of the Revolutionary War Generation, complied over 50 extant 19th-century photographs and shares known biographical information for each person.

In the mid nineteenth-century, Benson Lossing and the Reverend Elias Hillard retold the history of the American Revolution, Lossing in a travelogue and Hillard in a series of interviews with the survivors of the conflict. Both were driven to document the rapidly disappearing physical and personal histories of the beginnings of this country. Lossing wrote in his preface, “The story of the American Revolution has been well and often told, and yet the most careless observer of the popular mind may perceive that a large proportion of our people are but little instructed in many of the essential details of that event, so important for every intelligent citizen to learn…”

A Pension Office report published in the December 10, 1852, New York Times outlined the number of men and women who received support under various acts and how many were still on the rolls. The Pension Office mentioned that the total number of soldiers who received pensions under the Acts of 1818, 1828, and 1832 originally numbered more than 5,500. By 1852, there were reportedly 1,876 still on the rolls…

After reviewing Lossing’s and Hillard’s work, I wondered if it was possible to use photographic and documentary evidence to re-create the first generation of Americans – those men, women, and children bound together by having lived during the Revolutionary War. I realized it was conceivable that there were pictures – daguerreotypes, ambrotypes, ferrotypes, and even paper photographs of members of that generation who lived into the age of photography. With most born in the 1760’s these hardy men and women would have been at least eighty to one hundred years of age by the time Louis Daguerre took his first daguerreotype in 1839. The focus of this project on photographs (or on paintings based on daguerreotypes) was deliberate. There are many paintings of that generation, but a photograph elicits a different response from that of viewing a painting. There is a sense of connection in a photographic portrait that extends across the centuries.