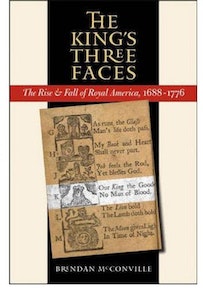 The King's Three Faces: The Rise and Fall of Royal America by Brendan McConville

This week's featured book explores the relationship between colonists and their king in colonial British America beginning with the Glorious Revolution of 1688. By looking at colonists' daily lives, annual celebrations, and writings, Brendan McConville argues that there was a strong emotional attachment to Great Britain's monarchs during this period that has been overlooked by earlier historians. By focusing on this relationship between king and subject, the book traces the colonists' growing disenchantment with King George during the 1760s and 1770s-culminating with the events of 1776.

In the following excerpt from The King's Three Faces: The Rise and Fall of Royal America, 1688-1776, we learn about the physical and symbolic destruction of objects associated with the Monarchy.

At the end of empire, Americans engaged in an orgy of iconoclastic violence in the streets: attacking churches, ripping down tavern signs, beheading royal statues, searching for any imperial symbol to destroy. In towns and counties named for the House of Hanover and William of Orange, this final crisis saw the swelling love for the monarch become mistrust and then uncontrollable hatred expressed in the destruction of royal arms, portraits, emblems, and, most visibly, royal statues and effigies. In some areas, the populace went so far as to bury the monarch's effigy. A funeral fit for a king-turned-tyrant-this was how the first British empire came to termination. This emotional ending stands as testament to the powerful grip the monarchy had on provincial imagination and emotions for the seventy-five years before 1764.

The iconoclasm began in 1774, in isolated incidents that foretold the political nation's symbolic cleansing by an emergent citizenry whose unrequited monarchical love had turned to loathing. Middleboro, Massachusetts, militia officer Daniel Dunbar found himself surrounded by a mob that demanded he surrender his unit's flag. The offending pennant carried the insignia of the British Crown, and its tyranny over Middleboro could apparently no longer be tolerated. When Dunbar resisted, local whigs tore him from his home, tarred and feathered him, made the unwise militiaman ride the wooden horse, then held him until he collapsed. A flag also became the herald of change in Charleston, South Carolina. In September 1775, the first flag not bearing a royal insignia was hoisted over the capital, apparently causing a wave of anxiety for those still loyal to the king. The blue field and the rising moon hoisted that autumn had no connection to the House of Hanover.

With the Declaration's public readings in July 1776, the royal father truly came crashing down in a torrent of acts designed to delegitimate royal rule. Many of the mobs drew on the funeral motif that had been part of imperial protest since liberty's repeated burial during the Stamp Act Crisis. In Boston, a ceremony 'absolving the United Colonies from their allegiance to the British Crown' drew a large crowd, which milled in the street until some decided to destroy all signs of the now-hated king. 'On the same evening,' it was reported, 'the King's arms, and every sign with any resemblence of it, whether lion and crown, pestle and mortar and crown, heart and crown, etc together with every sign that belonged to a tory was taken down, and the latter made a general conflagration of in King street.' How many more people privately closeted or destroyed personal belongings bearing the royal likeness can only be imagined.

Baltimore's symbolic regicide was more graphic and involved mock execution. After the Declaration was read there, in a punishment typical for a condemned man, 'the Effigy of our late King was carted through the town,' then committed to the flames before several hundred spectators, 'the just reward of a Tyrant,' as one writer described it. At Huntington on Long Island, a crowd fashioned the liberty pole into a royal effigy that they then marched and finally blew up before the town's residents. Late in July, Providence, Rhode Island, crowds burned the king's emblems and arms after parading them through the town's streets.

In the midlatlantic, the situation developed more gradually. Hot whigs, mild whigs, tories of various stripes, and a considerable body of Quaker and Pietist neutrals whose religious views precluded participation in any violent conflicts jostled for control of Pennsylvania. James Allen recorded on May 15, 1776, that, when the congressional resolves ordering new governments to be formed were read in public in Philadelphia, 'only one man Huzzead, in general it was ill received; we stared at each other.' On July 1, however, attendees at a trial in Philadelphia demanded the 'King's Arms in [the] Court Room should be taken down. The same...was done.' Even with such a signal of general resolve, doubt and dissent remained. Charles Thomson, the congressional recorder, reported that 'the boldness of the measure,' meaning the Declaration, 'frightened, and appalled, even its wellwishers.' When it was read, 'the citizens mostly kept aloof-the crowd that assembled at the state house was not great and those among them who joined in the acclaimation were not of the highest order, or the most sober and reflecting.' Yet according to Thomson, 'Its decisive character soon firmly united its supporters,' and in the wave of defiance that followed, the king's arms in the city courts were taken down, paraded, and publicly burned at nightfall in front of a large crowd. On the eighth, patriots removed the king's arms from another courtroom and the statehouse. In Dover, Delaware, a leader of the committee of safety hurled the king's portrait into the flames.

New York's royalist culture came to an end with the legendary toppling of George Ill's equestrian statue on the city's bowling green on July 9. By then, the statue had become more than an irritant to those determined to break the imperial tie. The lead monarch signaled their intended enslavement by a tyrant made more powerful by the impending arrival of thirty thousand British and German troops in New York harbor. American troops brought up to defend the city had 'long had an inclination' to remove the statue, and the Declaration 's reading pushed them over the edge. On July 9, Continental troops, joined by a crowd of New Yorkers, attacked the four-thousand-pound likeness of George III dressed as Marcus Aurelius and knocked it from its pedestal. In an action that strongly suggests the intersection of English history, particularly that of the Civil Wars, with provincial political consciousness, the crowd decapitated it (eventually denosing it as well) in emulation of the regicide of Charles I. The Americans melted down the statue for 42,088 bullets, thus referencing both the outbreak of the English Civil Wars in 1642 and the Glorious Revolution of 1688. A daring British officer saved the rhinochallenged head, however, and it was subsequently shipped to London, where the exiled Massachusetts royal governor Thomas Hutchinson remarked, 'It retains a striking likeness' to the king.