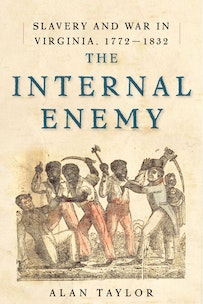 Alan Taylor’s The Internal Enemy: Slavery and War in Virginia, 1772-1832 addresses the paradoxical and complex subject of slavery in a state dedicated to ideals of liberty and freedom, yet that still enslaved two-fifths of their population. As the book’s title suggests, white Virginians viewed their enslaved populations as an “internal enemy,” enticed by the British to run away from their masters and mount an armed rebellion against them during the American Revolution. Therefore, when the British returned to the Chesapeake during the War of 1812, invading plantations and freeing slaves, Virginians faced another wave of fear of this “internal enemy” that further deepened the state’s commitment to slavery in the early decades of the 19th century.

While the majority of the book looks beyond the period of the American Revolution to the War of 1812, the following excerpt sets Lord Dunmore’s 1775 proclamation as the precedent to British actions nearly 40 years later.

Virginians anticipated an invasion by British troops to enforce imperial control by recruiting slaves with the promise of freedom. In late 1774, James Madison, then a young Patriot, reported the discovery of a slave plot to welcome and assist British troops. ‘It is prudent such things should be concealed as well as suppressed,’ Madison confided in a private letter, for Virginians dreaded that any publicity given to a slave plot would spread the danger by emboldening other slaves to revolt. White men felt torn between the urge to announce their peril and their need to hide it. In June 1775, Madison warned a friend to beware of British efforts to foment a slave revolt: ‘To say the truth that is the only part in which this Colony is vulnerable…we shall fall like Achilles by the hand of one that knows that secret.’

Lord Dunmore knew that secret of the internal enemy. In 1772, as the colony's royal governor, Dunmore alerted his superiors that Virginians, ‘with great reason, trembled’ because their slaves were ‘ready to join the first that would encourage them to revenge themselves, by which means a conquest of this Country would inevitably be effected in a very Short time.’ Initially, he balked at arming and emancipating the slaves because they were essential to Virginia's economy, and the British wanted to retain, rather than ruin, the colony. Dunmore hoped to intimidate the planters by merely threatening to arm and emancipate. His bluster became ominous on April 21, 1775, when his troops seized the public gunpowder supply in Williamsburg for removal to a British warship. Without that gunpowder, the planters feared they would lack the firepower to suppress a slave revolt, which rumors insisted was imminent. Galvanized by the seizure, Piedmont Patriots led by Patrick Henry took up arms and marched on Williamsburg to confront the governor, who escaped their wrath by fleeing to a British warship in June. By then in Philadelphia the Continental Congress of delegates from the colonies had taken charge of a conflict that had erupted at Lexington and Concord in Massachusetts in mid-April. Outraged by Dunmore's conduct, the Virginia delegates joined the New Englanders in urging a vigorous war to oust the British troops from the colonies.

By calling Dunmore's bluff, the Patriot coup in Williamsburg forced him to convert his bluster into black soldiers. In early November 1775, his proclamation offered freedom to slaves and indentured servants who would help him suppress the Patriot rebellion. Rather than a blanket offer of emancipation to all, he promised freedom only to young men who would bear arms against the rebels. Instead of intimidating the Virginians into submission, however, his Proclamation united almost all of the shocked whites as Patriots determined to win independence from British rule.

By early 1776, about 800 enslaved men, and an equal number of women and children, flocked to Dunmore's encampments and ships. If Dunmore wanted men as soldiers, he also had to receive their families, although feeding and sheltering them all strained his resources. Dunmore organized the men into a special unit, the ‘Ethiopian Regiment,’ commanded by white officers, for he was no racial egalitarian. But American slaves sought to make him one, spreading far and wide his renown as a supposed liberator. In Pennsylvania, a master posted an advertisement seeking the return of a runaway: ‘As Negroes in general think that Lord Dunmore is contending for their liberty it is not improbable that said Negroe is on his march to join his Lordship's own black regiment.’

Slaves nurtured a wishful legend that the British king was their benevolent protector. As with peasant and enslaved peoples elsewhere, they had long believed that the monarch truly loved the lowly laborers. In Virginia in 1730, slaves insisted that the king had ordered freed all slaves who had become Christians but that their masters had defied their monarch by ignoring his order. Some restive slaves prepared to revolt, but the Virginians suppressed that plot by executing four leaders. In 1775 in South Carolina, slaves spread a similar rumor that the king ‘was about to alter the World and set the Negroes Free.’ This tradition of the liberator king prepared southern slaves to fight for the British and against their masters during the revolution.

In Virginia, most of the runaways came from the Tidewater counties closest to Dunmore's ships and bases in the lower reaches of Chesapeake Bay. They escaped from riverside farms and plantations in canoes and boats stolen from their masters. Few ran the longer, overland gauntlet from the Virginia hinterland. Fearful of armed patrols and militia detachments, the interior slaves recognized, in the words of a Virginia newspaper, ‘the difficulty of effecting their escape, and what they must expect to suffer if they fall into the hands of the Americans.’ But that did not stop them from dreaming of freedom. On the upper Potomac River, far to the north of Dunmore's ships, George Washington's farm manager reported that among the slaves ‘there is not a man of them, but would leave us, if they believ'd they coud make their escape.’

Unwilling to accept that the escapes indicted their conduct and the slave system, the Virginians concocted their own wishful legend: that the British lured away the slaves only to resell them in the West Indies, where most would suffer conditions far worse than in Virginia. If the British were frauds instead of liberators, the slaves should cling to their masters as protectors rather than flee from them as exploiters. In speeches to their gathered slaves, masters warned of their West Indian peril and invited a renewed commitment to their servitude in Virginia. According to Robert Carter, his slaves dutifully answered, ‘We all fully intend to serve you our master and we do now promise to use our whole might & force to execute your Commands.’ But at least thirty of Carter's slaves ran away during the war. And there is scant evidence for the British selling any Virginia runaways into renewed slavery elsewhere.

To discourage escapes, Virginians made examples of some captured runaways by giving them brutal public floggings, often accompanied by lopping off an ear. The authorities also hanged runaways caught bearing arms for the enemy. Their severed and rotting heads sat atop posts placed at crossroads as a warning to passing slaves. Other intercepted runaways died of disease in wretched jail cells while awaiting trial. Dunmore did not sell any runaways to the West Indies, but the vengeful Patriots did as punishment. Others they sentenced to a short life of hard labor in the mines of Fincastle County, where the prisoners dug the lead that became bullets for the Patriots to fire at Dunmore's men.

The masters also threatened collective punishment on slave families or the decisions of their young men. In November 1775, the Virginia Gazette published an unprecedented appeal to Virginia’s blacks, who previously had been excluded from any political decision. The essay warned them not ‘to provoke the fury of the Americans against their defenceless fathers and mothers, their wives, their women and children.’ The author recognized that few slaves would forsake their families. Historian Cassandra Pybus notes that runaways usually fled in ‘a series of premeditated and well-organized escapes by interconnected family groups’ -as they would do again in the next war. Where families could not get out together, only a few especially desperate young men tried to escape to the British ships.

Patriot propaganda depicted Dunmore as promoting a bloody and indiscriminate massacre of white people by slave rebels. In fact, he wanted only to weaken the Patriots and strengthen his own force with black troops. Indeed, his superiors in London had prohibited any promotion of a slave insurrection, lest it ruin the economy of - a colony that they hoped to recover. And a slave revolt in Virginia would set a very ominous precedent for the British West Indies, which were especially valuable and dependent on slavery. To keep the West Indian colonies productive and loyal, the British played a restrained game with the slaves of Virginia. While welcoming and arming runaways, the British discouraged them from killing whites except as soldiers on the field of battle.

Dunmore's military ineptitude soon undermined his credibility as a liberator. In December 1775, just a month after issuing his proclamation, he rushed his raw recruits into a premature battle. Attacking the Patriot militia posted south of Norfolk at Great Bridge, Dunmore's men suffered a crushing defeat. In a panic, Dunmore fled to his ships, evacuating Norfolk. He set up a new base on Gwynn Island at the mouth of the Piankatank River, where most of his refugees succumbed to an epidemic of smallpox, for Dunmore had neglected to inoculate his recruits. Abandoning his botched campaign in August 1776, he sailed away to the British headquarters at New York City, recently captured from the Patriots. He withdrew about 500 blacks, leaving behind another 1,000 who were dead or dying. Their fate provided great fodder for Patriot propaganda, which cast the British as duplicitous seducers of foolish slaves. Many of the ailing, however, died gruesomely when the vindictive Patriots set fire to their flimsy brush huts, ostensibly to stop the spread of their smallpox.