The Indian World of George Washington 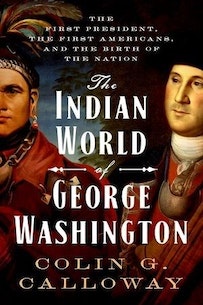 The Indian World of George Washington by Colin Calloway

While George Washington remains a centerpiece of Early American scholarship, few historical works focus on his complex and often fraught relationship with Native Americans. In his most recent book, The Indian World of George Washington, Dr. Colin Calloway attempts to restore Native Americans’ place in Washington’s story, exploring the ways in which the founder and President was inextricably linked to Native America. Throughout the work, Calloway puts Indian relations at the center of his analysis, illustrating Natives’ key role in shaping Washington’s worldview and subsequently creating and defining a nation predicated on Native American and African American exclusion. Despite his prominence as “the father of the nation,” Calloway argues, Washington was also a chief architect of the policies that stripped Natives of their land and culture in the century to follow.

In this excerpt, Dr. Calloway examines Washington’s lack of understanding of his Native allies in his early career and the impact Native people and lands had on the nation’s founding and Washington’s life and legacy.

American history has largely forgotten what Washington knew. Narratives of national expansion and Indian conquest often neglect power in the very formative years of the nation. Historians of the early Republic who focus on creating a new nation, the rivalry between Hamilton and Jefferson, and the challenges posed by relations with Britain and Revolutionary France often treat Indian affairs as tangential or even irrelevant. In fact, federal officials devoted much time and attention, and ink to conducting diplomatic relations with Indian politicians who, as the Moravian Rev. John Heckewelder observed, “display[ed] as much skill and dexterity, perhaps as any people upon earth” in “management of their national affairs.” Indian nations figured alongside European nations in the founding fathers’ thinking about the current and future state of the union. Indian leaders were adept at playing on American fears of British and Spanish backing for Indian resistance. Debates over the sovereignty of the United States and struggles over the extent and limits of federal authority and states’ rights occurred on Indian treaties, and Indian issues, wars, and land policies were critical in developing a strong central government.

Multiple books tell us how Washington forged the nation, and how he handled partnerships and rivalries between various founding fathers, but nothing was more central than the relationship between the first president and the first Americans. From cradle to grave Washington inhabited a world built on the labor of African people and on the land of dispossessed Indian people. Indian people were not as ubiquitous in his daily life as the enslaved men, women, and children who planted, tended, and harvested his crops, cut his wood, prepared and served his food, washed his laundry, cleaned his house, and attended to his every need. Nevertheless, Indian people and Indian country loomed large in Washington’s world. His life intersected constantly with them, and events in Native America shaped the direction his life took, even if they occurred “offstage.” Indian lands dominated his thinking and his vision for the future. Indians nations challenged the growth of his nation. A thick Indian strand runs through the life of George Washington as surely as it runs through the history of early America.

Probably more books have been written about Washington than about any other American, but few of them pay much attention to Indians, let alone consider the role they played in his life. Certainly none of Washington’s biographers have shown any particular interest or expertise in Indian history. It would command more attention if biographers recounting Washington’s schemes to acquire and develop territory beyond the Appalachians replaced the term “western land”—which implies that it was an unclaimed resource—with “Indian land”—which acknowledges that it was someone’s homeland. Washington spent so much of his adult life surveying and speculating in Indian lands. The Virginia of his youth was very much a British colony—linked to the mother country across the Atlantic by ties of loyalty, taste, and economy—but Virginians who ventured a hundred miles or so into the interior of the continent quickly found themselves in Indian territory. Virginia was at the forefront of colonial expansion westward, and Washington was at the forefront of Virginian expansion. Washington was ambitious, for himself and for his nation. His ambition led him down many paths, but it always led him back to Indian country.

Washington’s first trips westward were as a surveyor, and he looked on Indian lands with a surveyor’s eye for the rest of his life. Surveyors transformed “wilderness” that disoriented and threatened settler colonists into an ordered landscape they could understand and utilize. In colonial Virginia surveyors enjoyed status; in Indian country they met with suspicion if not outright hostility. Armed with compass, chains, and logbooks, surveyors were the outriders of an advancing settler society intent on turning Indian homelands and hunting territories into a commodity that could be measured and bounded, bought and sold, and Indians knew it. When the frontier trader Christopher Gist did some surveying near the Delaware town of Shannopin, on the southeast side of the Allegany River, in the fall of 1750, he did so on the quiet: “I…set my Compass privately, & took the Distance across the River, for I understood it was dangerous to let a Compass be seen among these Indians.”

Washington and his fellow Virginians speculated, surveyed, and encroached upon western lands on the assumption that permission from a king, governor, or council gave them the right to do so, and they often acted as though any Indians could cede the land of all Indians. But Indian people had something to say about it, and were intent on defending their rights and the territory that colonial governments and land companies carved up so cavalierly. “That it is a difficult matter to discover the true owner of any lands among the Indians is a gross error, which must arise from the ignorance of the matter or from a cause which does not require explanation,” Sir William Johnson, the British superintendent of Indian affairs in the North, observed to the Lords of Trade in 1764. “Each nation is perfectly well acquainted with its exact original bounds.” Indian country was a mosaic of tribal homelands and hunting territories, where individual nations guarding their own interests created a complicated landscape of multiple foreign policies, competing agendas, and shifting strategies. Speculating, surveying, and making land deals in Indian country required knowledge, quick learning, and fast footwork. It was no place for a novice.

As a novice in Indian country, Washington misread situations and mishandled Indian allies, and in the process sparked a war that in turn set in motion developments that led directly to the American Revolution. Blessed and blinkered by hindsight and Washington’s future role, historians of earlier generations often put the best face on his diplomatic and military expeditions over the Ohio country in 1753 and 1754, respectively. One described Washington’s journal of the first expedition, which he hurriedly wrote on his return and which was widely published as “a testimonial to his maturity and capacity for leadership.” Another, glossing over the debacle of the second expedition, pronounced: “It is thus obvious that Washington was already demonstrating those qualities of courage and leadership indicative of his future greatness.” In reality, young Washington found himself out of his depth in a complex world of rumors, wampum belts, and tribal agendas. As events spiraled out of his control, he received a crash course in Indian diplomacy, intertribal politics, and frontier conflict under the tutelage of a formidable Seneca named Tanaghrisson.