The Ghost Ship of Brooklyn 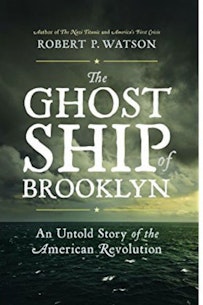 The Ghost Ship of Brooklyn by Robert Watson

One of the most horrific aspects of the American Revolution occurred within the harbor of New York City, where thousands of American soldiers and patriots suffered and died while imprisoned within a rotting, decommissioned British war ship. In his new book The Ghost Ship of Brooklyn: An Untold Story of the American Revolution author and historian Robert Watson weaves together accounts of the brutality of the prison ships from old newspapers, diaries, and military reports. Watson follows the lives of a few survivors of the notorious HMS Jersey to illustrate not only its abominable conditions, but also its surprising role in rallying support for American Independence.

The following excerpt details some of the horrifying conditions experienced aboard the HMS Jersey, remembered as the ‘Hell Ship’ by survivors of its atrocious conditions.

Shortly before sunset each night, all prisoners were ordered below decks and quieted. The hatchways were then sealed. The lucky ones gathered hammocks and bedding from storage in the spar deck and along the gangways on the middle deck. These hammocks were then hung on the middle deck, but the ship was so overcrowded that they had to be removed every morning and stored for the day. This routine was repeated every day. Prisoners occupied every available space, and the less fortunate ones bunked wherever they could find a few square feet on the old wooden floors. Worried that a fellow inmate might steal their personal possessions, some men chose to sleep on top of their bags and chests, which were stacked in rows in the gangways about ten feet from the sides of the ship. A few bunks in the stern port were designated for the sick and dying, although they were inadequate in number to hold the throngs of ailing prisoners, most of whom simply died quickly or were transferred to hospital ships.

Because of concerns about fires being set or escape plans being hatched, candles and lanterns were not permitted at night, leaving prisoners confined in complete darkness. Nights amid the cramped spaces; stale, poisonous air, rats, and stifling heat were anything but a time for peaceful rest for the prisoners. Rather, the crowded decks soon became a chorus of ‘groans of the sick and dying’ punctuated by sobbing and the ‘incoherent ravings of delirium.’ Many prisoners complained that crazed men in the grip of disease or mental anguish would pace about the ship and stumble over them in the pitch black. Others were haunted by the ghostly, skeletal images they saw lying next to them as darkness descended across the ship.

For the weakest among the prisoners it was even worse. A few large tubs were placed below decks and used as latrines. With the ship so severely overcrowded, these ‘receptacles of filch’ often overflowed onto the floors, and the stench near them was unbearable. Yet, with limited space, some men had no choice but to bunk beside the excrement.

The officers among the prisoners had it better. Far aft on the middle deck was the large gunroom. It had long ago ceased being used for weapons or ammunition, and was taken by the officers as their quarters. Since Thomas Dring of Rhode Island had served as a master's mace, he and his few fellow officers from the privateer Chance slept there. As for the crew of the Jersey, they occupied rooms at the stern. This included the steerage, which provided bunks for the guards and sailors. The ship's officers had a cabin under the quarterdeck in the back of the ship.

The ship bad been stripped so that virtually no furnishings or facilities remained. There were, however, a handful of compartments on the ship. The middle deck contained the steward's room, which was near the stern and was where the prisoners received their daily ration of food. After receiving their rations, each assigned dining group, known by the military term ‘mess,’ gathered in the corridors of the gangways to eat. These dark, creaking gangways were roughly five feet in width and connected one part of the ship to another. Prisoners were permitted to walk along them on the spar deck, which was covered, the only place on the upper deck offering them protection from the sun and rain. But because the ship was so crowded, prisoners had to organize themselves into ‘platoons’ that would face, walk, and turn to the same direction, thus allowing large numbers of men to exercise or move about the ship in a somewhat orderly manner.

The old ship had three main decks. Hatchways in the dead center of the ship led from one deck up or down to the next one. The two floors below the upper deck housed American prisoners, while European sailors were confined to the holds at the bottom of the ship, which the men referred to as the ‘lower dungeon.’ Most of the American prisoners never stepped foot on that wretched deck, nor did they want to. Thomas Dring was one of them. The officer recalled seeing French, Spanish, and Dutch sailors ascending the steps from the dungeon and observing their ‘dismal’ condition.' Ebenezer Fox, the young boy who ran away after the battles of Lexington and Concord in order to join the war, noted that most of the Europeans soon gave up all hope. He described their plight: ‘The inhabitants of this lower region were the most miserable and disgusting looking objects that can be conceived. Daily washing in salt water, together with their extreme emancipation, caused their skin to appear like dried parchment. Many of them remained unwashed for weeks, their hair long and matted, and filled with vermin, their beards never cut except occasionally with a pair of shears ... Their clothes were mere rags, secured to their bodies in every way that ingenuity could devise.’