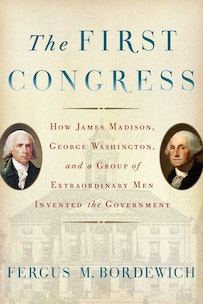 The First Congress: How James Madison, George Washington, and a Group of Extraordinary Men Invented the Government by Fergus Bordewich

The First Congress of the United States met from March of 1789 to March of 1791 and over three sessions, two in New York City and one in Philadelphia, the members of the Senate and the House of Representatives effectively “invented” the government that we know today. Dominated by powerful men such as James Madison, Robert Morris, Roger Sherman, and Oliver Ellsworth, the First Congress created the Departments of State, War, and the Treasury, established the Supreme Court, passed the Bill of Rights, launched the first national census, and located the permanent national capital in Washington DC.

From the debates between the Federalists and anti-Federalists over Alexander Hamilton’s financial plan to the simple question of how we address president, The First Congress: How James Madison, George Washington, and a Group of Extraordinary Men Invented the Government, by Fergus M. Bordewich offers a compelling story of the nation's first Congress.

In the following excerpt, George Washington, after having suffered through the summer of 1789 with an infected carbuncle, makes a rather uncomfortable and unprecedented appearance in front of the Senate.

The president's renewed vigor was on full display on August 5, when he strode into the Senate to demand an accounting for its refusal to approve his appointment of the federal naval officer in Savannah. After the debate over executive appointments back in June, Washington had assumed that he could name anyone he wanted to the new federal posts that had to be created in accordance with the revenue acts, and that the Senate charged by the Constitution with the duty of advice and consent-would respectfully go along with his choices. He had, after all, consulted in most if not every case with local congressmen before making appointments. To the Savannah post he had named the capable, well-connected president of the Georgia Executive Council, Benjamin Fishbourne, a protégé of the Revolutionary War general Anthony Wayne. To Washington's astonishment, Fishbourne was rejected without explanation. No other candidate he had proposed had been turned down.

Determined to get to the bottom of it, Washington set out for the Senate and startled the assembled members by appearing in the door of the chamber unannounced. A visit from the president was unprecedented, and without protocol. Flustered, John Adams immediately hopped up from his great chair and offered it to Washington, who bluntly demanded to know why the Senate had shot down his appointee. 'After long minutes of embarrassed silence,' Senator James Gunn of Georgia rose and admitted that he had objected to Fishbourne, and that his colleagues in the Senate had gone along with his wishes.

The story behind this was long and serpentine. Years earlier, Fishbourne, or rather his patron General Wayne, had somehow offended Gunn, who had also served under Wayne during the war. Now thirty-six, Gunn was a notoriously lazy legislator who had ignored his elections to both Georgia's Executive Council and to the Confederation Congress. He was, on the other hand, an enthusiastic duelist, who in 1785 challenged former general Nathanael Greene in an 'affair of honor.' (Greene essentially ignored him.) Fishbourne and James Jackson, now a congressman, had at that time been charged with delivering Gunn's challenge to Greene. Although Greene declined, this had somehow led to a contretemps between Fishbourne and Gunn. This duel, too, was halted before anyone was hurt, but Gunn continued to hold a grudge against Fishbourne, and when his name came up for confirmation by the Senate, Gunn 'urged nothing of any consequence but personal invective and abuse,' it was reported. (Wayne later interpreted Fishbourne's rejection, probably correctly, as a 'false, Malignant, and invidious' attack on himself.)

Most members of Congress were probably unaware of this background. Gunn now declared, with Washington present, that 'he' would have it distinctly understood to be the sense of the Senate that no explanation of their motives or proceedings was ever due or would ever be given to any President of the United States.' But since Washington had asked, Gunn would tell. This was pretty close to an insult to the presidency. Just what the president said in response to this is unknown. However, as one senator reported, Washington, who was generally a model of restraint, 'shewed great want of temper.' Stalking out of the chamber, he announced to his secretary, Tobias Lear, that he was sorry he had ever gone to the Senate at all.

In itself, the incident was minor. However, in this ever-innovating Congress, even the trivial became precedent. Gunn had turned what should simply have been a matter of presidential preference into a matter of honor. This pebble in the pond of the Senate's deliberations continued to ripple through the centuries to become the virtually unbreachable custom of senatorial courtesy, that is, the ability of any senator to block the executive appointment of an individual he opposes from his state or for any federal office in his state.