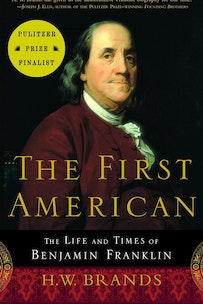 The First American: The Life and Times of Benjamin Franklin by H.W. Brands

In 1775, Benjamin Franklin returned from a long trip to England furious at America’s treatment by the British government and resigned to the unlikelihood of reconciliation between the two. In this excerpt from H. W. Brands’ The First American: The Life and Times of Benjamin Franklin we see the founding father presenting the first draft for the Articles of Confederation to the Continental Congress. Though it would take a year for the thirteen colonies to revise and adopt what would become America’s first constitution, it did immediately inspire a handful of important actions aimed to quietly prepare America for war.

A full year before the Congress declared officially in favor of independence, [Benjamin] Franklin had come to believe that independence was inevitable. Now he began working to make it a reality. None but the most obtuse could conceive American independence absent some form of intercolonial union; in July 1775 Franklin proposed a plan for just such a union. In spirit these ‘Articles of Confederation’ drew on the plan of union he had presented at Albany in 1754, but what then would have been a federation within the British empire now foreshadowed an independent state. The purpose of the confederation was the colonies’ ‘common defence against their enemies’ and ‘the security of their liberties and properties, the safety of their persons and families, and their mutual and general welfare.’ The congress of the confederation would be empowered to declare war and negotiate peace, enter into alliances, settle disputes among the separate colonies, create new colonies, arrange treaties with the Indian tribes, establish a post office, and administer or otherwise regulate a general currency. Representation in the congress would be proportional to population; executive power would be vested in an ‘executive council’ whose members would serve staggered three-year terms. The congress would have the power to propose amendments to the articles of confederation; these would take effect on adoption by a majority of the colonies.

Franklin appreciated that all this was considerably more than many of the delegates to the Continental Congress were willing to accept. To allay their fears he appended a clause contemplating the dissolution of the confederation upon Britain’s restoration of the rights and privileges of the American colonies, the withdrawal of all British troops from America, and the receipt of compensation for damages to Boston’s commerce and Charlestown’s structures and for the expense to the colonies of ‘this unjust war.’ How much this actually allayed the fears of the timid must be doubted; by all proclamation and policy Britain evinced that it would never accept such conditions. Failing acceptance, ‘this Confederation is to be perpetual.’

Even with the escape clause Franklin’s confederation was too forward, as he certainly realized. He contented himself with reading his articles to a committee of the whole Congress. He made no motion that required a vote or even a formal record of his proposal; his purpose was to set the delegates thinking about the kind of union that would be necessary to fight and win a war and to carry America into the peace beyond. In this he certainly succeeded, and when the time proved riper, his proposal became the starting point for the Articles of Confederation the Congress and the states finally adopted.

Other actions by Franklin bore fruit immediately. It was lost on none of the delegates, on none of the committees of correspondence of the several colonies, or for that matter on the British government, that the resistance to British usurpation could not have congealed as it had without an efficient postal service. Needless to say, British postal officials would be loath to deliver letters for practicing rebels; already the mails were being regularly opened. And already the colonial governments were making separate provisions for delivery. As one, the delegates to the Congress concluded that the obvious person to organize this alternative service was the man who had made the system run so well under the British. On July 26 the Congress unanimously elected Franklin postmaster general for the American colonies.

Even as he engaged the subordinates necessary to make the American post office a reality… Franklin received another appointment freighted with no less importance, albeit considerably less publicity. In September he was named to the ‘secret committee’ of the Congress; this group bore primary responsibility for obtaining the weapons necessary to wage the war. Franklin’s experience provisioning General Braddock’s army at the outset of the French and Indian War stood him well in this endeavor, as did his repeated raising of militia to defend Philadelphia, and his construction of forts on the Pennsylvania frontier. But the job was immense, being hardly less than creating an army from scratch…