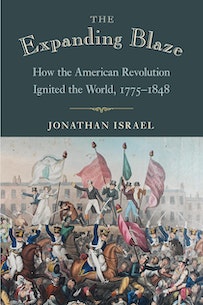 The Expanding Blaze: How the American Revolution Ignited the World, 1775-1848 by Jonathan Israel

The American Revolution was the first of a series of world-shaking democratic revolutions that swept the Atlantic World in the eighteenth and nineteenth centuries. Radical ideas of self-government, liberty, and republicanism challenged the Old World institutions of monarchy, aristocracy, and religious authority, transforming the modern world. In a sweeping work of intellectual history, Jonathan Israel investigates this global spread of enlightenment ideas in The Expanding Blaze: How the American Revolution Ignited the World, 1775-1848.

America's Revolution was the crucible of the United States, the 'Atlantic Revolution' as a whole the crucible of modern representative democracy. It introduced universal and equal human rights, freedom of expression and the press and republican liberty generally, as well as concerted efforts to end oppression of minority ethnic group and establish an international code curtailing the curse of war. A sense of America's quest for liberty representing a new beginning socially, politically, and philosophically in a way the earlier Dutch Revolt against Spain (1567- 1609) and the English seventeenth century revolutions had not, and of great consequence for all men and worthy of close study, received widespread expression down to around 1850. So did acclaiming the Revolution's most renowned leaders-Washington, Franklin, Jefferson, Adams, and, more divisively, Paine-as heroes of all humanity. Yet the first modern historian to focus on this international aspect, R. R. Palmer, in his The Age of the Democratic Revolution: Political History of Europe and America, 1760-1800 did so only in 1959. The American and French revolutions, Palmer reminded readers, 'shared a good deal in common,' and 'what they shared was shared also at the same time by various people and movement in other countries,' particularly, he suggested, Britain, Ireland, Holland, Belgium, and Switzerland but also Germany, Italy, and beyond. This broad connection between the revolutions he presented as an overarching 'Atlantic revolution.' But Palmer's path-breaking idea never attracted as much consideration and discussion from Americanists or Europeanists (or Latin Americanists) as one might have expected.

Where the American Revolution's greatest impact in the 1770s and 1780s was on France, Holland, and Ireland (where the American example became especially closely linked to rising discontent), and among opponents of the British Crown and aristocracy, it was considerable also in southern Europe and Latin America. The most comprehensive work of political theory written during the Revolutionary War was actually composed in southern Italy by the Neapolitan political and legal theorist Gaetano Filangieri (1752-88) and much more widely diffused in Spain and Spanish America than in the English-speaking world. Banned outright by the papacy in December 1784, owing to its vehement declarations against the clergy and in favor of religious toleration, this multivolume work, La Scienza della legislazione (1780), a cornerstone of the late eighteenth-century 'Radical Enlightenment' was 'perus'd with great pleasure' by Franklin. Inspired by the ideas of Raynal, Diderot, Helvétius, and Vico, Filangieri adopted the principle of equality of rights as proclaimed in America in 1776, viewing the American Revolution as the commencement of a generalized revolt against all despotism, oligarchy, and colonial oppression, and the hierarchical character of Old World society generally. American revolutionary principles also permeated Filangieri's extended assault on the political ideas and geographical relativism of the most widely influential 'moderate' political theorist of the age, the great French Enlightenment thinker Charles-Louis de Secondat, Baron de Montesquieu (1689-1755). Filangieri attacked Montesquieu for his promotion of the 'mixed government' model bequeathing power in practice predominantly to aristocracies.

Filangieri felt so uplifted by recent developments in America, he assured Franklin in 1782, he would have liked to settle permanently in Pennsylvania, America's 'refuge of virtue,' 'country of heroes' and 'brothers. 'This was more than flowery courtesy. If the American Revolution exerted a democratizing effect, Pennsylvania, from 1776, surpassed the other colonies (except Vermont) by becoming the modern world's first near-democratic state, the first where government was formed by male society as a whole, electing the legislature and adopting a constitution granting universal adult male suffrage. Some contemporary observers eulogized Pennsylvania's new constitution and the inspiring part Pennsylvania's leaders played in ending state-supported institutionalized religious authority and in projecting black emancipation. The 'immense populace that blesses your name,' wrote Filangieri in his last letter to Franklin, dated 24 December 1785, endorsing his international, transatlantic renown, 'is the only reward befitting the author of its liberty and avenger of its wrongs.' In celebrating Pennsylvania's special character and the state's triumphs over royalty, aristocracy, slave owners, and ecclesiastical authority, Filangieri echoed a sentiment then common among radical philosophes and reformers that lingered for decades. Philadelphia, which had around thirty thousand inhabitants when the Spanish American revolutionary Francisco de Miranda (1750-1816) arrived there in 1783, striking him as 'one of the most pleasant and well-ordered cities in the world,' was the heart of this extended, more democratic 'American Revolution.' The French democratic republican Joseph Cérutti, in 1791, fully concurred: Philadelphia, 'entirely populated with brothers and devoid of tyrants, slaves, priests, and without atheists, idle men or any poor, would deserve to be the capital of the world.'

The American Revolution's global impact was a matter of example and inspiration, providing a new ground-plan for human society. But this in turn raised issues of how far the Revolution had fulfilled its own promises at home and how far the United States should encourage and promote the wider process of transatlantic revolution abroad. In attributing to the new United States an especially exalted status in mankind's progress toward equality, liberty, and democratic republicanism, radical Enlightenment thinkers consciously assigned a global responsibility to America, a responsibility applying both within and outside the United States. 'You free citizens of independent America,' exhorted Filangieri in the fourth volume of La Scienza, in 1780, 'you are too virtuous and too enlightened not to know that by winning the right to rule yourselves, you have accepted in the eyes of the entire world the sacred duty to be wiser, more moderate and happier than all other peoples! [agli occhi dell'universo il sacro dovere di esser più savi, più moderati e più felici de tutti gli altri popoli]. You must answer before the tribunal of mankind for all the sophisms your mistakes might produce contrary to liberty.' Price, Paine, and Condorcet too, besides others, were acutely conscious that the American Revolution's democratic aspect they and their allies cherished not only needed extending to Britain, Ireland, Europe, and the rest of the world but needed urgently to be consolidated, built on, and safeguarded within the United States themselves.

This part utopian, part realistic vision of the American Revolution stoked disaffection with the existing order in Europe and Latin America for three-quarters of a century. Where earlier revolutions rendering Switzerland and the United Provinces free republics, and seventeenth-century England a constitutional monarchy, were regarded virtually with 'indifference' by the rest of humanity, remarked one of Filangieri's disciples, the Italian revolutionary Francesco Saverio Salfi (1759-1832), in 1821, and these upheavals had no truly lasting global effect, the American Revolution impacted far more widely and lastingly. The reason, contended Salfi, was that by the 1770s the Enlightenment had taken hold broadly, whereas before 1750 it had not yet pervaded society generally. Having first initiated a revolution of the mind 'which soon became that of all Europe,' the transatlantic intelligentsia, 'les amis de la philosophie,' priding themselves on having overthrown ecclesiastical intolerance and demolished the universities' obsolete science and scholasticism rooted in 'the systems of Plato and Aristotle,' entered on a new phase commencing in 1775, spurred by the American revolutionary experience, instigating a general assault on 'political servitude.' As a consequence of the new ideas and proliferation of the press the American Revolution was 'forged in the crucible of the Enlightenment'; and it was this that made its message resonate as a truly universal event. 'The present is an age of philosophy; and America, the empire of reason,' confidently averred Tom Paine's ally, the Connecticut revolutionary Joel Barlow (1754-1812), in 1787. Amid the optimism following the securing of American independence, he fully expected America to fulfill his radical vision of a world permanently transformed for the better. He later acknowledged having been wildly overoptimistic in his expectations of America and France.