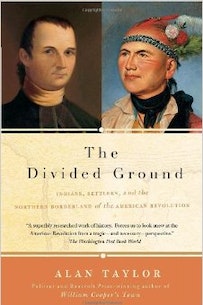 The Divided Ground: Indians, Settlers, and the Northern Borderland of the American Revolution by Alan Taylor

As we honor Native American Heritage Month, today’s excerpt from Alan Taylor’s book The Divided Ground features an important ally in the War of Independence: the Oneida Nation. The Oneida were one of the six nations of the Iroquois Confederacy (including the Tuscarora, Onondaga, Cayuga, Seneca, and Mohawk) whose ancestral lands span present-day New York and Canada. For more than a century before the American Revolution, the Oneida and other Iroquois nations had skillfully played French and British colonial powers off one another in order to defend their lands and sovereignty. Tragically, this strategy sometimes brought Iroquois people into conflict among themselves. The American Revolution plunged the Confederacy into danger again, as British and American leaders appealed to the Oneida and other native nations for support.

During the summer of 1776, General [Philip] Schuyler had ordered the reconstruction and garrisoning of Fort Stanwix at the critical portage between the Mohawk River and Wood Creek. Renamed Fort Schuyler, the post guarded the western entrance to the Mohawk Valley, which reassured the Oneidas of protection in the event of British-led invasion from Canada. In Schuyler's words, the fort would 'impress on the Indians an idea that we are capable of acting with vigour, and that we do not mean to be trifled with.' In August, Schuyler met some Six Nations chiefs in council at German Flats to explain the new policy, to bestow presents, and to promise protection of Oneida lands against encroaching settlers. He pledged that the United States would honor the boundary line established by the 1768 Treaty of Fort Stanwix, In return, the attending chiefs renewed a friendly neutrality that endorsed Schuyler's military plans to defend the valley.

The pretense of Iroquois unity and neutrality collapsed in August 1777, when [British officer Barrimore] St. Leger's army advanced from Oswego to attack Fort Schuyler. That diverse force consisted of about 700 Britons and Loyalists joined by 800 Iroquois warriors: a mix of Senecas, Cayugas, Onondagas, and Mohawks. On the other side, Oneidas and some Tuscaroras helped the Patriot defense. At Kahnawake, an Oneida spy, Deacon Thomas, provided an advance warning of the invasion, a warning that facilitated efforts to strengthen Fort Schuyler. Once St. Leger's siege began, about 60 Oneida warriors, led by Honyery (Thawengarakwen) joined the 700 American militia, commanded by General Nicholas Herkimer, who marched from German Flats to relieve the fort.

At Canajoharie, Molly Brant [of the Mohawk] noted the Patriot preparations and sent a secret message of warning to her brother [Mohawk leader Joseph Brant]. Tipped off, the Loyalists and Iroquois ambushed Herkimer's men near the Oneida village of Oriske (Oriskany), about five miles southeast of the fort, on August 6. After a bloody, daylong battle in brutal heat, dense gunpowder smoke, and even a brief thunderstorm, the Oneidas and Patriots retreated, leaving behind at least 200 dead. The Patriot losses included five members of the Tryon County Committee of Safety, two state legislators, and General Herkimer. The Loyalists and their Iroquois allies suffered lighter losses but heavy enough by native standards: about 50 dead...

The bloody battle at Oriske embittered relations between the Oneida and the Mohawks. Immediately after the battle, Brant's Mohawks burned Oriske, while the Oneidas (and some Patriots) plundered Tiononderoge and Canajoharie... Although gratifying to Oneida and settler anger, this plundering weakened the Patriot cause by inducing most of the Mohawks still in the valley to flee to Canada or Niagara, where they strengthened the British with additional warriors...

As most of the Iroquois rallied to the British and Loyalists to raid the Mohawk Valley, the Oneidas and Tuscaroras soared in importance to the Patriot cause. As guides and warriors, they became indispensible to the defense of an embattled frontier. Servings as allies, rather than as hired soldiers, the Oneidas conducted the war as they saw best. While fighting the British and Loyalists with verve, the Oneidas avoided (after the battle of Oriske) combat with their fellow Iroquois, who reciprocated the restraint. That mutual caution served the interests of the frontier Patriots, who were on the defensive, better than the British, who complained that their Iroquois allies avoided any area where they might clash with the Oneidas. That mutual restraint also enabled Oneida spies to mingle with their Iroquois friends at Niagara and in Canada, gathering information that alerted the Patriots to impending attacks. And by circulating American overtures and news of Patriot victories, the Oneida agents worked to disaffect Loyalists and their Iroquois allies from the British cause. Ruing the Oneida effectiveness in the shadow war of the northern frontier, Haldimand declared: 'The Treachery of the Onidas and [the] constant obstacles they present to our Scouts in any attempt upon the Mohawk River makes it a matter of serious consideration to compel them to relinquish the Rebel Interest, or to cut them off.'

Recognizing their crucial importance, General Schuyler carefully wooed the Oneidas. In early 1776, he wrote to them: 'Be assured that you will be a happy people whilst you remain in Love and Friendship with us and that I will do my utmost to make you love me as much as I do you.' Although desperately short on supplies, Schuyler did everything he could to provide something for the Oneidas. In October 1776, he observed, 'They are such good Friends, that I wish to have it in my power to give them some Cloathing.' Schuyler also promised American protection for Oneida lands after defeating the British and the Loyalists: 'You will then partake of every Blessing we enjoy, and united with a free people, your Liberty and Property will be safe.'

Schuyler bolstered Oneida morale by forcefully disseminating news of Patriot victories. After George Washington's Continental Army won the battles of Trenton and Princeton during the winter of 1776-1777, Schuyler rushed the news to Kanonwalohale. He sent along barrels of rum, 'wishing you to drink Health, peace and Liberty to your American Brethren and everlasting Friendship between you and them.' Upon receiving a subsequent keg in early 1779, to celebrate another Patriot victory, the Oneidas assured Schuyler, 'It makes us feel happy & wish further Success & greater Victories to your Chief Warrior and all his men.'"