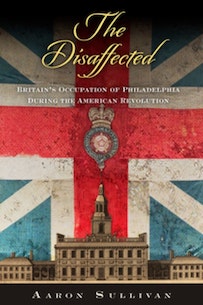 The Disaffected: Britain’s Occupation of Philadelphia during the American Revolution by Aaron Sullivan

The American Revolution is often perceived as a war between Patriots and Loyalists, but what about those Americans who found themselves caught between the lines? Aaron Sullivan explores the lives and experiences of these men and women, known as the “disaffected,” in his recent work, The Disaffected: Britain’s Occupation of Philadelphia during the American Revolution. He argues that for many Americans, the war was not something to be won or lost, but rather something to be endured. Sullivan’s focus on the disaffected sheds light on Pennsylvania’s fragmented society, subsequently humanizing the War for Independence.

In this excerpt, Sullivan explains who the “disaffected” men and women of Philadelphia were.

Some of these people, like the Drinkers, were pacifists, but many more became or remained disengaged from the Revolutionary conflict as a matter of pragmatism, not principle. They have been called ‘the great middle group of Americans…who were dubious, afraid, uncertain, indecisive, many of whom felt there was nothing at stake that could justify involving themselves and their families in extreme hazard and suffering.’ Persistently disinterested in or opposed to involvement with imperial politics and committed to separate goals, they quietly pursued their own livelihoods to the best of their ability amid turmoil, helping or hurting either side more incidentally than intentionally, and hoping to come through the Revolutionary storm with as little harm and as much profit as possible, whichever side eventually proved triumphant. They would yield, but not rally to, whoever held power over them. When no party clearly held the reigns of authority, they looked to their own interests by whatever means were available. Both the Revolutionaries and the British referred to this diverse group as ‘the disaffected,’ perceiving correctly that their defining feature was less loyalty to than a lack of support or affection for either party in the dispute. If we assume that all Americans must be classified as either ‘Patriots’ or ‘Loyalists,’ we risk mischaracterizing these people as fickle, opportunistic, apathetic, or even treasonous. But if we can recognize them as the disaffected, a people without any strong political attachments to betray, their actions might yet appear to be rational and consistent.

Disaffection existed in a variety of forms and arose from numerous causes. Among Americans who were aware of and engaged with colonial politics, a group that expanded rapidly in the third quarter of the eighteenth century, there was nearly universal disapproval of the new taxes and regulations imposed by Britain in the 1760s and early 1770s. Differences of opinion existed as to the severity of the threat and the proper colonial response to it, but in general Americans of various stripes began to look across the Atlantic with a more wary and less trusting gaze. The colonists’ long-standing attachment to the British monarch, already strained, was stretched to the breaking point by the harsh imperial crackdown on Massachusetts following the Boston Tea Party and by the bloodshed at Lexington. Horrified by this seemingly unabashed imposition of tyranny, many Americans were pushed into an ill-defined and loosely connected resistance. Throughout the colonies they assembled into committees; in Philadelphia, they convened a Continental Congress; in New England they formed an army.

Yet as the resistance to parliamentary overreach expanded in unanticipated ways after 1774, an increasingly large number of Americans found it unpalatable, particularly once the goal of securing the British constitutional liberties of American subjects was subsumed by the pursuit of independence. Driven by negative personal experiences with radical Revolutionaries, economic conflicts with the Revolutionary program, political and ideological disagreements with the ever-evolving Revolutionary agenda, attempts to preserve or undermine social and economic hierarchies, or some combination of these, they distanced themselves from the movement. In the end, some would conclude that the opposition was no more desirable, or just as terrible, as their oppressive monarch. ‘I love the cause of liberty,’ wrote James Allen in 1776, ‘but cannot heartily join in the prosecution of measures totally foreign to the original plan of Resistance.’ Rather than pushing men and women back toward a greater affection for the empire, such pressures pushed them out, away from both loyalism and rebellion, and down, into a seclusion and silence that came naturally to those who could find no cause to rally around. Though much of his family embraced the Loyalist cause and sought protection from the British military, Allen retreated to his country home where he and his acquaintances endeavored to ‘banish Politics’ from their lives and conversations.