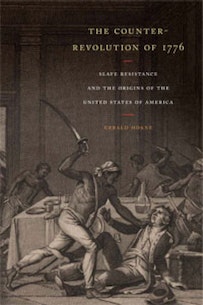 The Counter-Revolution of 1776 by Gerald Horne

While most histories of the Founding of the United States tell an uplifting story, historian Gerald Horne’s recent work, The Counter-Revolution of 1776: Slave Resistance and the Origins of the United States of America, finds that the creation of the republic was neither positive nor inevitable, especially for Africans. Rather, Horne demonstrates how the Revolution reinvigorated the slave trade and subsequently bore a counter-revolution of slavery. He argues that African slaves played an important role in igniting the rebellion that would become the American Revolution, a conflict he traces back to crucial turning points like the Glorious Revolution. Horne ultimately contends that our current understanding of the Founding is in need of revisiting.

In this excerpt, Horne explains the long-term impact the Glorious Revolution of 1688 had on the British Empire and the slave trade.

In summary, the post-1688 tumult brought London mixed blessings. Surely, the enhanced slave trade it augured lined the pockets of numerous merchants in Bristol and Liverpool—but in Rhode Island too, which instigated dreams of independence. This tumult delivered more Africans to the hemisphere who were not immune to the seductive appeals of Madrid. This tumult also brought more Negro insurrectionists who helped to spur an abolitionist movement that served to create a gulf between London and its increasingly obstreperous colonies.

These Africans played a pivotal role in spurring once proud British subjects to revolt against the Crown, thanks to the final colonial governor in Virginia, Lord Dunmore: he was viewed as a villain by the rebels, particularly after his notorious November 1775 decree to free and arm enslaved Africans in order to squash the anti-colonial revolt. Dispatched to bolster his deteriorating rule were 160 men from the 14th Regiment in St. Augustine.

But often forgotten when Dunmore is invoked is the run-up to November 1775, when rebellious Africans had sought to eliminate settlements, leading some colonists to feel that the world could be upended and they could assume a status below that of vassals. Thus, the threat of Negro revolt was magnified in the desperation driven by the Yamasee War, featuring the indigenous rampaging against settlers, which led to the arming of Africans in South Carolina in 1715. In other words, in addition to competing European powers—for example, Spain—allying with Africans, settlers also had to worry about slaves bolstering revolts of the indigenous. Engaged typically in dickering and arbitrage, simultaneously Africans were also negotiating with and cooperating with raiding parties by the indigenous. In some instances, they even entered into formal alliances with the indigenous and commenced their own unilateral wars against the colony. “There must be great caution,” several planters warned, “lest our slaves when arm’d might become our masters.” This was the profoundly significant fear that hovered like a dark cloud over the colonial project, a fear London unwittingly ignited into raging fever as 1776 approached with its tentative steps toward abolition while arming and deploying African soldiers to the colonies.