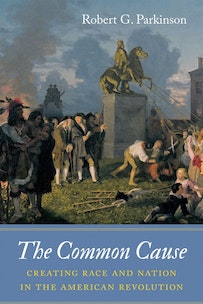 The Common Cause: Creating Race and Nation in the American Revolution by Robert G. Parkinson

At the outset of the Revolutionary War, the differences between the thirteen American colonies seemed insurmountable and the likelihood of them uniting together to defeat a global superpower appeared to be impossible. The leaders of the Revolutionary movement recognized that they would need a ‘common cause’ to unify the people politically. In The Common Cause: Creating Race and Nation in the American Revolution, Robert G. Parkinson explores the creation and propagation of a ‘common cause,’ crafted by Patriot leaders, to rally colonists from South Carolina to Massachusetts against a common enemy.

The following excerpt from the book describes General George Washington’s rhetorical use of the ‘common cause’ in his general orders and explores how the Revolutionary leaders used the press to spread both good and bad news throughout the colonies during the war.

On July 2, 1776, as Congress neared a final vote on independence, Washington issued general orders in which he reiterated the main tropes of the wartime common cause. He reminded his men, ‘The time is now near at hand which must probably determine, whether Americans are to be, Freemen, or Slaves.’ Upon the ‘Courage and Conduct’ of American arms, ‘the fate of unborn Millions will now depend .... We have therefore to resolve to conquer or die: Our own Country's Honor, all call upon us for a vigorous and manly exertion, and if we now shamefully fail we shall become infamous to the whole world.’ ‘Let us therefore rely upon the goodness of the Cause,’ Washington proclaimed, ‘and the aid of the supreme Being, in whose hands Victory is, to animate and encourage us to great and noble Actions . . . Let us . . . shew the whole world, that a Freeman contending for Liberty on his own ground is superior to any slavish mercenary on earth.’

This statement, even more than Jefferson's opening paragraphs of the Declaration, encapsulates all the qualities patriots wanted every American to grasp about the common cause on the eve of independence. True patriots ‘contended for Liberty’ through’ vigorous and manly exertion,’ whereas anyone who opposed these ‘great and noble Actions’ was the opposite of the freemen, a ‘slavish mercenary.’ Beginning that summer, Washington's injunction would be put to more stringent tests. Whether enough of the public would rally around this interpretation of what constituted the duties of freemen remained to be seen. The abstract metaphors through which patriot polemicists had defined this conflict might not be sufficient to defend the now-independent United States of America. It helped the project of animating and encouraging each other that patriot leaders were also able to justify that defense against real slaves and mercenaries.

For the remainder of 1776, patriot publicists broadcast as much good news as they could, featuring stories about how ‘vigorous,’ ‘manly’ ‘Freemen’ turned back British incursions on both the Carolina coast and backcountry and how similar heroes in Virginia ousted Dunmore from his refuge in the Chesapeake Bay. Readers were, as ever, reminded that these British agents depended on proxies to achieve the ‘Tyranny meditated against them,’ as Washington put it. When the fearsome invasion force of British and German soldiers finally attacked at summer's end, however, there was little good news to report, especially after the fall of New York City. Patriot political leaders scrambled to blunt this force, renewing their efforts to encourage the Germans to desert and reconsidering their stances on arming Indians. But print remained the most effective weapon at their disposal; patriot publicists exchanged stories depicting the appalling behavior of the ‘slavish mercenaries’ in America.

Then those stories stopped. With the capture of nearly a thousand Hessian soldiers in Washington's surprise Christmas raid on Trenton, newspaper reports that had previously described the Hessians as rapists, plunderers, murderers, and destroyers- ‘Men monsters,’ in the eyes of one contemporary- vanished. The frightening Hessians were suddenly transformed, a remarkable conversion that again underscores the power of print and the exchanges during the Revolution. But, even more than that, the Hessians' ‘redemption’ illustrates how contrived the common cause truly was. It was a construction that selected certain materials and left others unused, not ably the participation of ‘good’ African Americans and Indians on the American side. Moreover, when their practicality waned, the common cause construction abandoned previously vital materials. It was more expedient to the patriots not to remind readers of the mercenaries' vileness.

All of this was a creative act. Patriot leaders understood this, but, as yet, few British or loyalists acknowledged the political power of the common cause argument. Late in 1776, one did. Ambrose Serie, the secretary of British army commander Lord William Howe, comprehended that newspapers were the epicenter of this creativity. They were the reason the patriots had survived all British military maneuvers thus far. Serie was one of the most astute British observers of the American rebellion. He recognized the source of patriot success-the power of the press and the stories of British Proxies- and moved to counter their efforts. Luckily for the patriots, there were not many like him in 1776. Contrived though it may have been, by the summer of independence, the common cause was beginning to have real political consequences for a growing number of people in North America.