The American Revolution: A Historical Guidebook 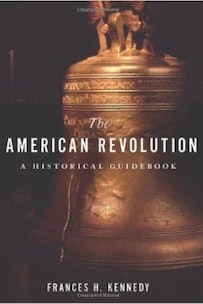 The American Revolution: A Historical Guidebook by Frances H. Kennedy

Innumerable places in the United States bore witness to the events of the American Revolution—from battle sites and encampments to taverns and universities. In The American Revolution: A Historical Guidebook, Frances H. Kennedy ambitiously describes more than 100 of these landmarks in the chronology of their importance to the war. In today's excerpt we learn about six places where the New Jersey campaign of 1776-1777 was bravely fought by General Washington's troops, resulting in victories at Trenton and Princeton.

In November of 1776 [British] General [William] Howe began to implement his plan to occupy eastern New Jersey, where there were farms that could provide food for his soldiers during the winter. General Washington's intelligence sources informed him of Howe's plans, and on November 9 he began to move his army across the Hudson south of Peekskill to prepare for the British advance. On November 12 he set up his headquarters in Hackensack and ordered [Major General Nathaniel] Greene to evacuate Fort Lee. Howe ordered General Charles Cornwallis with 5,000 soldiers to attack the fort. The British scaled an unguarded slope of the steep Palisades north of Fort Lee and took it in a surprise attack on November 20. Major General Nathaniel Green and most of the garrison escaped and crossed the Hackensack River at New Bridge on the night of November 20, ahead of the British. In command of 10,000 men, Cornwallis pursued Washington, following Howe's orders to pressure Washington while avoiding a battle and to stop at New Brunswick. Washington retreated to Princeton, then to Trenton. To save his army, he took all of the boats along the Delaware River and ferried his army across it into Pennsylvania on December 8, just ahead of the British soldiers. Howe stopped his pursuit and ordered his army into winter quarters in encampments between New York and Trenton. He offered pardon to residents in the New Jersey area who would pledge their loyalty to King George III and returned to New York to prepare for his winter leave in England.

On December 21, 1776, Colonel Samuel Griffin and 750 New Jersey militiamen skirmished with the Jäger Corps of the Hessian army commanded by Colonel Carl Emilius von Donop at the Petticoat Bridge north of Mount Holly. Reinforced on December 23, von Donop attacked the Americans in the Mount Holly area. They retreated in a running skirmish to their fortified positions along Pine Street and Iron Works Hill. When Donop began shelling their positions from the Mount, Griffin withdrew during the night of December 24-25 to a nearby hill. Instead of marching his troops to Bordentown so that he could support Colonel Johann Rall at Trenton, von Donop kept them in Mount Holly where he stayed for three nights.

Washington's army crossed the Delaware River into New Jersey, and fought the battle of Trenton on December 26 against Hessians commanded by Colonel Johann Rall. Washington Crossing State Park includes the site of the landing at Johnson's Ferry and the Johnson's Ferry House.

Trenton Barracks, a fieldstone structure, was built in 1758 during the Seven Years' War. When General Washington attacked Trenton, there was skirmishing around the building against the Hessian troops stationed within. After defeating the Hessians, the Americans used the Barracks as a hospital. It was occupied at different times during the war by American, British, and Hessian troops as well as loyalist refugees and prisoners.

After the second battle of Trenton, Washington called a meeting of his general officers. They decided to attack Princeton. During the night of January 2-3, 1777, Washington ordered his soldiers to leave their campfires burning and march east of General Cornwallis's army toward Princeton. A drop in the temperature froze the formerly muddy roads. Cornwallis had ordered Lieutenant Colonel Charles Mawhood to bring reinforcements from Princeton to Trenton. About daybreak on January 3 as Mawhood marched toward Trenton, the battle began between his force and General Hugh Mercer's 350-man brigade on the Quaker Road six miles from Princeton.

Princeton University, then known as the College of New Jersey, opened Nassau Hall, a three-story sandstone building designed by Robert Smith, in November 1756. While the British occupied Princeton, they used Nassau Hall as a barracks, a storage facility, and a jail. During the January 1777 battle of Princeton, Captain Alexander Hamilton's artillery forced the British soldiers in the hall to surrender. It was heavily damaged during the war and only partially restored when the Continental Congress met in the Hall between June and November of 1783. The delegates had fled Philadelphia to avoid the soldiers demanding their back pay. After the Hall burned in 1802, the architect Benjamin H. Latrobe supervised the reconstruction.