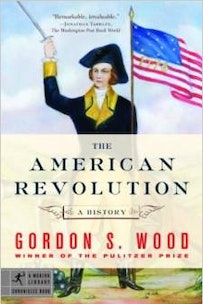 The American Revolution: A History by Gordon S. Wood

In the fight for independence from British rule, Americans were presented with an opportunity to establish a new political system for themselves apart from a traditional monarchy. Gordon Wood's The American Revolution: A History shows how the centuries-old ideals of 'republicanism' influenced the state governments being formed at the start of the conflict–particularly their emphasis on empowering citizens from the bottom up.

A military victory over Great Britain may have been essential for the success of the Revolution, but for Americans it was scarcely the whole of the Revolution. Although the Revolution had begun as a political crisis within the empire, by 1776 it was no longer merely a colonial rebellion. From 1775, when independence and hence the formation of new governments became imminent, and continuing throughout the war, nearly every piece of writing about the future was filled with extraordinarily visionary hopes for the transformation of America. But not just America's government and society would be transformed; its role in the world would be changed as well. Americans had come to believe that the Revolution promised nothing less than a massive reordering of their lives—a reordering summed up in the conception of republicanism.

This republicanism was in every way a radical ideology—as radical the eighteenth century as Marxism was to be for the nineteenth century. It meant more than simply eliminating a king and establishing an elective system of government. It added a moral and idealistic dimension to the political separation from England—a dimension that promised a fundamental shift in values and a change in the very character of American society.

Republicanism intensified the radicalism of the 'country' ideology that Americans had borrowed from opposition groups in English society, and linked it with the older and deeper European currents of thought that went back to antiquity. These classical currents of thought—essentially explanations for the decline of the ancient Roman Republic—set forth republican ideals and values—about the good life, citizenship, political health, and social morality—that have had a powerful and lasting effect on Western culture.

These classical ideas had been revived by Renaissance writers, particularly Machiavelli, and had been carried into seventeenth-century English thought by such writers as James Harrington, the poet John Milton, and Algernon Sidney. It was under the influence of these classical republican ideas that England in the seventeenth century had executed its king, Charles I, and had tried its brief experiment in republicanism, the Commonwealth (1649-53). By the eighteenth century these classical republican ideals had spread throughout western Europe and had become a kind of counterculture for many dissatisfied Europeans. In countless writings and translations, ranging from Charles Rollin's popular histories or antiquity to Thomas Gordon's translations of Tacitus and Sallust, eighteenth-century European and British intellectuals evoked the utopian image of an earlier Roman republican world of simple farmer-citizens enjoying liberty and arcadian virtue. Reformers everywhere saw this idealized ancient world as an alternative to the sprawling monarchies, with their hierarchies, luxury, and corruption, that they had come to despise in their own time.

In the excitement of the Revolutionary movement, these classical republican values came together with the long-existing European image of Americans as a simple, egalitarian, liberty-loving people to form one of the most coherent and powerful ideologies the Western world had yet seen. Many of the ambiguities Americans had felt about the rustic provincial character of their society were now clarified. What some had seen as the crudities and deficiencies of American life could now be viewed as advantages for republican government. Independent American farmers who owned their own land no longer had to be regarded as primitive folk living on the edges of European civilization and in the backwaters of history. Instead, they could now be seen as equal citizens naturally equipped to realize the republican values intellectuals had espoused for centuries.

Inevitably, the new American states in 1776 became republics. Everyone knew that these new republics with their elective systems had not only political but also moral and social significance. Republicanism struck directly at the ties of blood, kinship, and dependency that lay at the heart of a monarchical society. In a monarchy individuals were joined together as a family by their common allegiance to the king. Since the king, in the words of the English jurist William Blackstone, was the 'pater familias of the nation,' to be a subject was in fact to be a kind of child—weak and dependent, sinful and lacking in self-restraint. Yet monarchies, based on the presumption that human beings were corrupt, had persisted almost everywhere for centuries because they offered security and order. Left alone and free, people, it was assumed, would run amuck, each doing what was right in his own eyes. Such a selfish people had to be held together from above, by the power of kings who created trains of dependencies and inequalities, supported by standing armies, strong religious establishments, and a dazzling array of titles, rituals, and ceremonies.

Republicanism challenged all these assumptions and practices of monarchy. By throwing off monarchy and becoming republicans in 1776, Americans offered a different conception of what people were like and new ways of organizing both the state and the society. The Revolutionary leaders were not naïve and they were not utopians—indeed, some of them had grave doubts about the capacities of ordinary people. But by adopting republican governments in 1776 all of them necessarily held to a more magnanimous conception of human nature than did monarchists... If republics were to have order, it would have to come from below, from the people themselves, from their consent and their virtue, that is, from their willingness to surrender their personal desires to the public good."