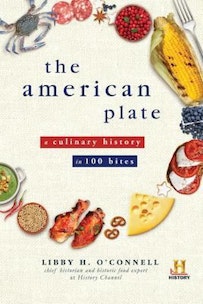 The American Plate: A Culinary History in 100 Bites by Libby O'Connell

In The American Plate: A Culinary History in 100 Bites, author Libby H. O'Connell shows how the evolution of the country can be understood through changing trends in food and drink. Her exploration of the Revolutionary period covers products like wheat flour, oxtail, sugar, rum, and whiskey. In this excerpt about the rise in popularity of coffee and tea, she explains the role patriotism played in leading us towards our now ubiquitous coffee culture.

It's true: Americans consumed a lot of liquor in the past and continue to enjoy alcoholic beverages today. However, we also are a nation of gung-ho coffee drinkers. Today, coffee accounts for 83% of all hot beverages consumed, with black tea, green tea, and hot chocolate sharing the measly remainder of 17%. It was not always thus.

The English mania for drinking tea spread like wildfire across the Atlantic around the 1720s. British merchant shipped the black shriveled leaves all the way from China. Market demand meant that they could charge a pretty penny. And along with tea arrived the fashionable accoutrements: the teakettle for boiling water, the teapot for brewing, the tea strainer, the tea linens, the sugar bowl, the tongs, the little teaspoons, and of course, the dainty teacups-a vast array of consumer items to display and enjoy. Like syllabub glassware, tea things illustrate the rise of the consumer revolution in colonial America. In some colonies, 50% of households owned a tea set by the 1750s. Americans loved their tea as much as the British did.

That's one reason why people did not respond well when Parliament granted the British East India Company a monopoly on the American tea trade. The tea wasn't more expensive, but enforcement provided for a different court system and a harsher attitude toward smugglers. When a group of colonial activists threw a shipload of tea into Boston Harbor in 1773, the heavy-handed response of the British government led directly to the Battle of Lexington and Concord and ultimately to the American Revolution.

Ironically, the leaders of the Boston Tea Party in 1773 planned their political demonstration at a coffee house called the Green Dragon. Coffee was not a new addition to colonial beverages—Dorothy Jones of Boston became the first licensed coffee trader in America in 1760. Coffee really took off in New York City, even replacing beer as the preferred breakfast drink in the early 1700s.

The rejection of tea and other imports symbolized the rejection of British dominion. Americans looked to raspberry leaf and other locally grown herbal teas to replace the Bohea leaf sold by the British East Indian Company.

Once imported tea became politicized as a drink fit only for loyalists to the Crown, it dropped out of fashion. Tea drinkers were criticized by their neighbors, and a new age of coffee drinking dawned. Grown in the New World, coffee did not represent British economic interests. It was hot and highly caffeinated, and it retained much of its popularity even after the Revolution, when tea drinking no longer made one a pariah.

Many Americans happily returned to tea drinking when the war ended in 1783, just as they happily returned to purchasing British manufactured goods. Middle-class families embraced the ritual of afternoon tea in the 19th century, demonstrating the domestic virtues associated with genteel tea service. Coffee houses thrived in East Coast ports, where merchants and other (mostly) men met to discuss business, and had its place as a pick-me-up. It should be noted that the former French and Spanish colonies also maintained a coffee-drinking tradition. But tea upheld its position in American culinary culture, just as Americans continued to look to Britain for other cultural trends such as fashion, literature, landscaping, and art.

So when did we become a nation of devoted coffee drinkers? Coffee would completely eclipse hot tea in 1865, when Union soldiers trooped home from the Civil War. The U.S. government had issued coffee as part of their standard rations, and returning veterans kept right on drinking it. By the 20th century, people drank coffee everywhere in the United States. And today, coffee and its myriad variations are found from Seattle street corners to rest stops along Route 95.