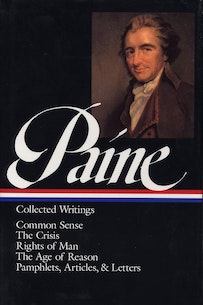 Beginning with the immortal line, “THESE are the times that try men's souls,” Thomas Paine’s “The American Crisis, No. I” holds a revered place in American History. Composed as a patriotic rallying cry for a weary army, Paine published the first pamphlet in the series on December 19, 1776. It is said that on Christmas Eve of that year, George Washington ordered it to be read to his troops before the crossing of the Delaware and the pivotal Battle of Trenton on December 26, 1776.

THESE are the times that try men's souls. The summer soldier and the sunshine patriot will, in this crisis, shrink from the service of their country; but he that stands by it now, deserves the love and thanks of man and woman. Tyranny, like hell, is not easily conquered; yet we have this consolation with us, that the harder the conflict, the more glorious the triumph. What we obtain too cheap, we esteem too lightly: it is dearness only that gives every thing its value. Heaven knows how to put a proper price upon its goods; and it would be strange indeed if so celestial an article as FREEDOM should not be highly rated. Britain, with an army to enforce her tyranny, has declared that she has a right (not only to TAX) but "to BIND us in ALL CASES WHATSOEVER" and if being bound in that manner, is not slavery, then is there not such a thing as slavery upon earth. Even the expression is impious; for so unlimited a power can belong only to God.

'Tis surprising to see how rapidly a panic will sometimes run through a country. All nations and ages have been subject to them….Yet panics, in some cases, have their uses; they produce as much good as hurt. Their duration is always short; the mind soon grows through them, and acquires a firmer habit than before. But their peculiar advantage is, that they are the touchstones of sincerity and hypocrisy, and bring things and men to light, which might otherwise have lain forever undiscovered. In fact, they have the same effect on secret traitors, which an imaginary apparition would have upon a private murderer. They sift out the hidden thoughts of man, and hold them up in public to the world. Many a disguised Tory has lately shown his head, that shall penitentially solemnize with curses the day on which Howe arrived upon the Delaware.

I shall conclude this paper with some miscellaneous remarks on the state of our affairs; and shall begin with asking the following question, Why is it that the enemy have left the New England provinces, and made these middle ones the seat of war? The answer is easy: New England is not infested with Tories, and we are. I have been tender in raising the cry against these men, and used numberless arguments to show them their danger, but it will not do to sacrifice a world either to their folly or their baseness. The period is now arrived, in which either they or we must change our sentiments, or one or both must fall.

But, before the line of irrecoverable separation be drawn between us, let us reason the matter together: Your conduct is an invitation to the enemy, yet not one in a thousand of you has heart enough to join him. Howe is as much deceived by you as the American cause is injured by you. He expects you will all take up arms, and flock to his standard, with muskets on your shoulders. Your opinions are of no use to him, unless you support him personally, for 'tis soldiers, and not Tories, that he wants.

Quitting this class of men, I turn with the warm ardor of a friend to those who have nobly stood, and are yet determined to stand the matter out: I call not upon a few, but upon all: not on this state or that state, but on every state: up and help us; lay your shoulders to the wheel; better have too much force than too little, when so great an object is at stake. Let it be told to the future world, that in the depth of winter, when nothing but hope and virtue could survive, that the city and the country, alarmed at one common danger, came forth to meet and to repulse it.

It matters not where you live, or what rank of life you hold, the evil or the blessing will reach you all. The far and the near, the home counties and the back, the rich and the poor, will suffer or rejoice alike. The heart that feels not now is dead; the blood of his children will curse his cowardice, who shrinks back at a time when a little might have saved the whole, and made them happy. I love the man that can smile in trouble, that can gather strength from distress, and grow brave by reflection.

Mutual fear is the principal link in the chain of mutual love, and woe be to that state that breaks the compact. Howe is mercifully inviting you to barbarous destruction, and men must be either rogues or fools that will not see it. I dwell not upon the vapors of imagination; I bring reason to your ears, and, in language as plain as A, B, C, hold up truth to your eyes.

Once more we are again collected and collecting; our new army at both ends of the continent is recruiting fast, and we shall be able to open the next campaign with sixty thousand men, well armed and clothed. This is our situation, and who will may know it. By perseverance and fortitude we have the prospect of a glorious issue; by cowardice and submission, the sad choice of a variety of evils — a ravaged country — a depopulated city — habitations without safety, and slavery without hope — our homes turned into barracks and bawdy-houses for Hessians, and a future race to provide for, whose fathers we shall doubt of. Look on this picture and weep over it!–and if there yet remains one thoughtless wretch who believes it not, let him suffer it unlamented.