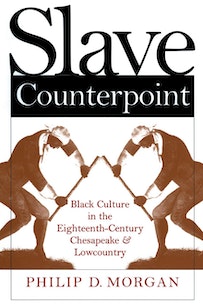 Despite being published over 20 years ago, Philip Morgan’s Slave Counterpoint: Black Culture in the Eighteenth-Century Chesapeake and Lowcountry remains today one of the leading studies on black culture in eighteenth-century America. His work compares slave societies in the Virginia Chesapeake to that of the South Carolina Lowcountry, exploring the contours of black life, such as family, work, diet, medicine, housing, courting, and sex. He finds that slave culture was both African and European, wrought with continuity and adaptation. His thematic approach further reveals the contrast in production in these slave societies—the lowlands cultivated rice and indigo while Virginia became a producer of tobacco and wheat. Morgan concludes by suggesting that although work routines and experiences of slaves were not all that dissimilar in these two regions, perhaps the material treatment of slaves was better in the Lowcountry.

In this excerpt, Morgan explains the value of studying slave culture in the eighteenth century and “humanizing the institution of slavery.”

Previous literature on slave societies has paid remarkably little attention to the humanity or individual variation that can be discerned in the endless encounters between the enslaved and the free. Shifting concentration, in Winthrop Jordan’s words from “sociology of the slave institution toward an anthropology of the slaves and their masters” is useful, though not without risks. In humanizing the institution of slavery, the scholar can easily understate the sustained exploitation slaves suffered. But an emphasis on routine encounters between master and slave, white and black, has a larger context: it connects to current historiographical trends in working-class life, popular culture, and gender, where attention has focused on the intersection of patrician and plebian, high and low, male and female. Popularly packaged as upstairs-downstairs history, it’s real contribution in the search for balance among conflict, confrontation, and contest on one hand and accommodation, cooperation, and negotiation on the other.

Readers may be surprised that there is no chapter on resistance. In a sense, the whole book is a study of resistance. In work and in play, in public and in private, violently and quietly, slaves struggled against their masters. Wherever and whenever masters, whether implicitly or explicitly, recognized the independent will or volition of their slaves, they acknowledged the humanity of their bondpeople. Extracting this admission was, in fact, a form of slave resistance, because slaves thereby opposed the dehumanization inherent in their status. In this way, slaves constantly achieved small victories. But their major triumph was the creation of a coherent culture—the subject of this book and the most significant act of resistance in its own right. Yet, by carving out some independence for themselves, by forcing masters to recognize their humanity, and by creating an autonomous culture, slaves also eased the torments of slavery, and, in that respect, their cultural creativity encouraged accommodation. Ultimately, then, the struggles between masters and slaves were profoundly ambivalent—another reason why they are explored throughout the book.