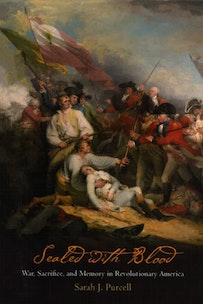 Sealed with Blood: War, Sacrifice, and Memory in Revolutionary America by Sarah Purcell

Purchase the book from University of Penn Press.

Public celebrations of Revolutionary War battles and military heroes began even before the war was over. A commemoration for the Battle of Lexington and Concord took place in 1776.Major General Joseph Warren-who died at the Battle of Bunker Hill-was honored as a national martyr in poems, sermons, and a play shortly after his death. In Sealed with Blood: War, Sacrifice, and Memory in Revolutionary America, Sarah J. Purcell argues that Shared experiences of war and sacrifice offered Americans an opportunity to create a sense of national unity and identity during and after the war.

South Carolinians were quick to celebrate their successful defense of Charleston from a British attack in 1776. The following excerpt discusses Palmetto Day, an early celebration of the victory.

Palmetto Day marked the anniversary of the victory over the British at the Battle of Sullivan's Island in June 1776, at which American forces under the command of South Carolinian William Moultrie and Virginian Charles Lee had repelled British naval forces and stalled major British incursions into the South. During their campaign to capture Charleston in 1776, the British first had to assault a partially completed palmetto-log fort that had been hastily erected on Sullivan's Island. The fort's spongy-soft logs absorbed the impact of a huge British naval bombardment, and though the Americans ran short of ammunition several times, they managed to hold the fort until the British gave up and sailed away. The celebrations of the victory at Charleston heaped special glory on the men of South Carolina, but they also connected those who participated directly to the purpose of the larger war effort.

Palmetto Day celebrations were far more secular and frankly patriotic in tone than the celebrations in Lexington, Massachusetts-in part because of how and by whom they were planned. The commemorative activities were largely organized by the Palmetto Society, a group founded by patriot radicals who had been thrown together in a British prisoner-of-war camp early in the war. The Palmetto Society was formed in June 1777 in Charleston to commemorate the ‘ever memorable’ victory of June 28, 1776. The society advertised in newspapers for weeks in advance of the festivities that all ‘Lovers of their Country’ were welcome to pay three dollars to join the members who had ‘associated themselves together, principally for the Purpose of celebrating the Anniversary of that Day, with decent and chearful Festivity.’ The Society orchestrated elaborate, day-long celebrations in 1777 and 1778 whose splendor and enthusiasm rivaled Charleston's famous Fourth of July revelries. While the three-dollar fee meant that membership in the Palmetto Society was a mark of some economic status, the celebrations planned by the society did not end up as narrowly controlled, elite affairs.

The first celebration of Palmetto Day in 1777 began early in the morning with the ringing of church bells and the firing of artillery, followed by sermons preached at St. Michael's church and at Fort Moultrie. At noon the Charleston militia companies paraded near the harbor and fired a ‘Feu de Joye’ as men-of-war, privateers, and foreign trading ships returned salutes. Beginning in the mid-afternoon, several large feasts were held at various locations around the city, each catering to a specific class of citizens of the town. Both men and women played appointed roles at the military banquets. The commissioned officers of the Second Regiment , the officer heroes of Sullivan's Island, dined with their commander, Isaac Motte, while ‘the Ladies’ provided for the non-commissioned officers and privates at Forts Moultrie and Johnson. A French guest observed in his journal that after a banquet at the State House held in the afternoon for the South Carolina Provincial Congress, those in attendance toasted the health of ‘all those loyal to the common cause, and also to the prosperity of Carolina and of all of the thirteen provinces, to their constant union and amity.’ A more complete mix of nation and region could not be found.

The city's elites dined well as they pondered the national meaning of South Carolina's military glory at the public banquet that set the official tone for the day's celebrations. The Palmetto Society sponsored a dinner for over 300 guests at Mr. Valk's Long Room, a popular site for large celebrations. At the conclusion of the meal, thirteen ceremonial toasts were drunk, ‘accompanied by several State Salutes (13 Guns each) from two Brass Field Pieces.’ The toasts included tributes to the South Carolina heroes of June 28, including General William Moultrie, Sergeant William Jasper, and ‘the...Ten who fell in Defence of America’ on that day. The salutes then linked the victory at Sullivan's Island to the greater cause of liberty as the group toasted to the success of South Carolina and wished: ‘May American Troops, in the Day of Battle, remember the 28th of June.’ The toasts concluded on a national note that bound regional sacrifices together as the group drank to General Washington, General Lee, ‘the immortal memory of the great General Montgomery,’ and ‘the immortal Memory of Doctor Warren.’

Those not included in the formal banquet given by the Palmetto Society celebrated throughout the evening as well, and popular enthusiasm for the holiday was great. The militia volunteers and their ‘families and friends’ dined in several taverns and picnicked ‘out in the open under the palmetto trees.’ In a rare wartime public accolade for a soldier of humble rank, Sergeant William Jasper, who had scaled the fortifications during the Battle of Sullivan's Island to wave the state flag, sat among the revelers and accepted public praise as he was toasted along with the Congress, Moultrie, and others. A group of artillery volunteers gave thirteen cheers accompanied by cannon fire to the great approval of onlookers from ‘the streets, the balconies and the windows’ in the center of town.

The group of people gathered in the streets of Charleston was a heterogeneous one, and it probably included even some of the African Americans who helped to construct the palmetto fort that had withstood the British cannonball attack on Sullivan's Island. While humble citizens of Charleston and African American slave laborers might never, at least during the war, be themselves the subjects of extensive toasting (or drama, or poems, or songs), they certainly connected themselves to the political meaning of the day just by their participation. The day's celebrations concluded with a grand unity of ‘the people.’ At nine o'clock the banqueters joined the public in front of Valk's as persons of all social ranks joined together for a splendid display of fireworks that included ‘two noble Palmeto Trees prepared for the Occasion’ bearing illumination.

The political meaning of the military celebration was clear and heartfelt. Patriots voluntarily joined to celebrate their own victory and to solemnize their role in the larger Revolution. Palmetto Day dramatized how a pageant of regional pride could also confirm the vision of community consensus necessary to the creation of national identity. The French visitor to Charleston pronounced the day's festivities far superior to European patriotic pageants: ‘These popular military celebrations are far more real than those forced upon an indifferent population. Morever [sic], instead of wasting their patriotic fervour, these celebrations serve to further arouse the republican and antiroyalist spirit of the people, who vie with their leaders in expressing their love of liberty.’

In a state plagued by division over the Revolution, the celebrations enshrined a local community linked to an emerging nation: ‘Thus, these celebrations serve as excellent political moves, making not only enthusiastic citizens of the people, but ardent partisans of the new system as well. Even the followers of the Royalists and many who are indifferent to the common cause, see the example set by the others at these affairs and are gradually educated around to their beliefs.’ Through their participation in the celebration, the people of Charleston made themselves into ‘enthusiastic citizens’ indeed.

The celebration of Palmetto Day in 1778 followed along similar lines with military parades, several dinners, and patriotic toasts in abundance. Again one of the most important themes of the celebrations was preserving for political purposes the memory of the battle and those who had died in it. The banquet given at the State house was followed by ‘a brilliant assembly of ladies, who were presented with a ball in the evening.’ The fireworks and the lights strewn about town after nightfall reportedly ‘surpassed all previous ones.’

Palmetto Day marks a fitting end to the consideration of how commemorations created national identity during the war. The people of Charleston celebrated the battle anniversary right up until the city was occupied in 1780. They turned out into the streets annually to show their patriotic enthusiasm for military memory as they celebrated heroism, local bravery, and nationalism all at the same time. The real war disrupted this public festival, however, and Charlestonians were unable to resume celebrating until after the American victory at Yorktown. By then, a new set of postwar social and political concerns would provide the context for their pubic commemoration.