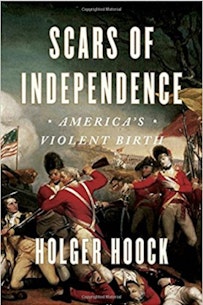 Scars of Independence by Holger Hoock

Accounts of torture, suffering, slaughter, and starvation fill the pages of Holger Hoock’s Scars of Independence: America’s Violent Birth. By writing “violence back into the story,” Hoock intentionally complicates the traditional narrative of America’s founding and questions the motives of the Revolutionaries, the British, and those unwillingly entangled in the conflict.

In July 1776, the final thread that had been tying the colonies formally to the Empire was cut. For the Patriots, there was now no turning back. As a newly sovereign state, the United Colonies from September styled officially the United States-as well as the thirteen constituent states demanded undivided loyalty from those living in their territory. Across America, everyone, at least in principle, now had to decide whether to be a British subject and leave or remain as a citizen of America. Neutrality was no longer an option-not in theory, and not in practice, either: ‘Sir, we have passed the Rubicon,’ John Jay told Beverley Robinson, a prominent landowner in the Hudson Valley who was still bent on neutrality, early the following year, ‘and it is now necessary every man Take his part.’ For the Revolutionaries, allegiance was volitional: all individuals were given a period of grace to pledge their loyalty to the British Crown or to the United States. Given a generous six weeks to make up his mind and sign an oath, Robinson eventually evacuated his family behind British lines.

After they had declared their independence, the Patriots put their policing of political loyalties on a stronger legal footing. First, the Congress and then the states passed treason laws and confiscation and banishment acts. Preparing in June 1776 for the eventuality of independence, Congress had already defined treason as levying war against the United Colonies, adhering to the king of Great Britain, or giving the enemy aid or comfort. Recruiting for the enemy and joining them - even acting as a local guide became capital offenses. John Adams, who denounced the Loyalists as ‘an ignorant, cowardly pack of scoundrels,’ was buoyant, judging that the treason laws would ‘make whigs by the thousands ... A treason law is in politics like the article for shooting upon the spot a soldier who shall turn his back. It turns a man's cowardice and timidity into heroism, because it places greater danger behind his back than before his face.’ Eight states banished named Loyalists and threatened to execute them in the event that they ever returned. Over the course of the war, several states would execute convicted Loyalist traitors.

In addition to treason laws, the states enacted test laws, which required citizens to swear loyalty towards their states of residence. In most areas, the relative harshness of anti-Loyalist laws depended on how strong pro-British sentiment was perceived to be and which side had the upper hand militarily. In New Hampshire, where active Loyalism was fairly marginal and where the war had a limited direct impact, oaths of allegiance were only required from state servants, officers, and lawyers, starting in late 1777. By contrast, residents of the strongly Loyalist Westchester County in New York were at much greater risk of being declared open enemies. Under the direction of New York's Committee for Inquiring into Detecting and Defeating all Conspiracies, and supported by a sizable militia, local committees would go on to try some 1,000 individuals by 1779. During that same period, Loyalist refugees swelled British-controlled New York City's population to 33,000.

The repercussions for those who did not comply with the test laws were typically harsher than the punishments for those who had refused previous loyalty oaths. They were now regularly banned from voting and barred from holding office, practicing their professions, and trading. Nowhere could they serve on' juries, acquire property, inherit land, or even travel at will. Confiscation of property affected tens of thousands of Loyalists during the war, allowing the states to accrue assets and condemn traitors to a social death without engaging in widespread executions. Some refugee populations were repeatedly dispossessed and displaced, like the Connecticut Loyalist exiles who retreated to Long Island, only to be targeted there by Patriot raiding parties across the sound.

In this messy period of transition, as prosecutions under the new laws intensified, committees and mobs across the colonies continued to spread terror among Loyalists and waverers alike. In today's Darien, Connecticut, an ‘American guard’ arrested Walter Bates, the fifteen - or sixteen-year-old son of an Anglican Loyalist family. The Patriots suspected Walter of knowing the whereabouts of fugitive armed Loyalists, including his own brother, who were thought to be hiding out in the neighborhood. His interrogators, Walter later recounted, ‘threatened [him] with sundry deaths,’ including by drowning, unless he confessed. At night an armed mob took Walter to a local salt marsh, stripped him naked, and tied him by his feet and hands to a tree. He despaired that over as little as a two-hour period, the mosquitoes would draw ‘every drop of blood ... from my body.’

After they had softened him up, two of the committee members then presented Walter with a choice: he could either confess and be released, or he would be handed back to the mob, which might well kill him. When he refused, Walter was told he would receive a punishment of one hundred lashes. If the whipping did not kill him outright, Walter was reassured, he would be hanged. After an initial twenty lashes had been administered, Walter was returned to the guardhouse, to be further ‘insulted and abused by all.’ His tormentors had apparently reconsidered the lash count, but Walter's ordeal was far from over.

The following day the committee discussed various means of extracting a confession by torture. As Walter told it, ‘[T]he most terrifying was that of confining me to a log on the carriage in the Saw mill and let the saw cut me in two.’ After the agonies he had already been through, Walter had every reason to assume the Patriots meant business. But then his fate turned again. Reprieved from meeting his end as a human log, Walter was brought before a man he referred to as Judge Davenport. Marveling that he had never seen anyone withstand greater suffering without exposing his comrades, Davenport eventually ordered Walter released. Like many persecuted Loyalists, he lay low in the woods and mountains until the ‘frenzy might be somewhat abated.’ His sacrifice was not in vain: Walter's brother managed to evade the Patriot search parties and went on to fight with General Cornwallis at Yorktown.