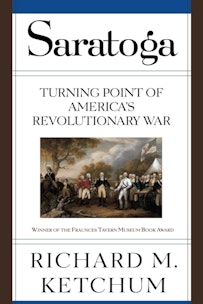 Purchase the book from the Museum Shop

On September 19, 1777, and October 7, 1777, two important battles were fought by British and American forces near Saratoga, New York, in a campaign by British General John Burgoyne to cut off New England from the middle and southern states. While the British won the first battle, they also suffered substantial casualties. Nineteen days later, in the second attack, American forces claimed a decisive victory, surrounding and trapping the British forces. In this excerpt from Richard M. Ketchum's Saratoga: Turning Point of America's Revolutionary War we see Burgoyne and his stunned and battered troops begin the long march to finalize their surrender.

In one respect nothing had changed: the morning dawned 'very dark and foggy.' But in all others this was a day like none that had gone before, and no one who was there would ever forget it.

Within the British and German lines the men who were about to surrender had spent much of the night preparing for their long march to Boston—some two hundred miles, they were told—and with the rains and cold coming on soon the business of transporting their gear was bound to prove difficult. The few surviving horses 'exhibited a most wretched picture of poverty and want, made up of nothing but skin and bone,' according to Lieutenant Digby.

Early that morning, [British General] John Burgoyne removed the uniform he had worn for sixteen days and nights and dressed with particular care, putting on the gorgeous scarlet coat with the gleaming gold braid and a hat fitted with plumes—the spotless regimentals he had planned to wear for his triumphant entry into Albany. The first order of business was a final meeting with all his officers. It was an anguished moment for the general, who wanted them to understand the reasons behind his actions from the time he took command of the army, but recounting the story was too much for him and he broke down, too upset to go on... He read aloud the articles of the convention as a way of reassuring the officers that the terms were much easier than they could have expected, adding that he never would have talked peace with [American General Horatio] Gates if they hadn't run out of provisions or had had any hope of extricating themselves from the predicament they were in...

Then it was ten o'clock, time to go. After the soldiers left their dying campfires, some of them had a good deal of reshuffling to do: since a need no longer existed for an advanced corps, the flank companies that had been assigned to it now returned to their own regiments. Sergeants shouted orders, ranks were closed and opened, and after the lines were dressed the troops stood at attention as company and regimental officers walked back and forth, slowly inspecting them.

It was their final parade as soldiers of General John Burgoyne's army... One after another, the proud regiments of the British line—9th, 20th, 21st, 24th, and 62nd, colors flying, fifes and drums playing—along with the Royal Artillery and assorted surgeons, chaplains, adjustants, quartermasters, and engineers, all in tattered uniforms or whatever clothing they could piece together, marched out of the lines with their heads high and headed toward the river. The Americans who had camped on the north side of Fish Creek had all withdrawn at Gates's orders so as not to be witnesses to the enemy's ultimate humiliation.

William Digby of the 53rd, the Shropshire Regiment of Foot... was sick at heart, but he knew what this occasion must mean to the rebels, and he had enough respect for the opponents who had beaten his army that his journal entry for the day had an extra-large heading: 'A day famous in the annals of America.' Yet as he stood at attention waiting for the order to march, he realized that the regimental drums had lost their magic to excite him, while the grenadiers' march 'seemed... as if almost ashamed to be heard on such an occasion.' He couldn't express his own feelings: tears filled his eyes and he knew if he had been alone he would have burst out crying.

Behind the redcoats came a steady procession of blue-uniformed Germans—dragoons and grenadiers, the Rhetz, Riedesel, and Specht regiments, some green-clad Hesse-Hanau infantrymen and artillery—moving in precise formation toward the flats by the river, just north of Fish Creek's junction with Hudson, where a few low mounds were all that remained of the walls of Fort Hardy, a redoubt covering fifteen acres, built during the French and Indian War. Here scores of horses lay dead, and the intolerable stench of decaying bodies, added to the mortifying task that engaged the troops, forced them to finish the business as quickly as possible. Even so, it took time. The artillerymen parked their cannon while infantrymen emptied cartridge boxes and staked their muskets, but the experience was too much for a few drummers, who stomped holes in the skins of their drums, while some angry foot soldiers smashed the butts of their muskets and threw them on the piles.

Burgoyne had already checked out the site where his army's bitter rendezvous with reality was taking place. Before the troops marched there, [American soldier and statesman] James Wilkinson came to escort him to Gates's headquarters and before doing so showed him the big field flanking the Hudson. When the general asked whether the river was fordable here, Wilkinson wondered if [Burgoyne] still had hopes of escaping and said it was, 'but do you observe the people on the opposite short?'

"Yes, said Burgoyne, "I have seen them too long."