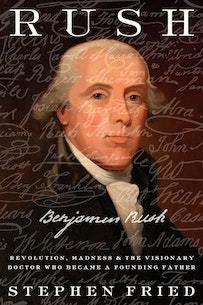 Dr. Benjamin Rush was born in Philadelphia, went to medical school in Scotland, was a signer of the Declaration of Independence, surgeon-general in the Continental Army, and a professor of medicine. Besides being a progressive revolutionary, he was also a bold critic of many of his contemporaries, including Washington and Hamilton. In his new book Rush: Revolution, Madness, and the Visionary Doctor Who Became a Founding Father, Stephen Fried presents Rush as an accomplished and passionate, but sometimes unpolitic, Founder. For example, shortly after he was appointed surgeon-general for the Middle Department in April 1777, he published his thoughts on keeping soldiers in the Continental Army healthy in a Pennsylvania newspaper. Though history would show his advice was largely correct, he did it without letting his superiors in the army review it or even know he was publishing it.

Before he started his new job in the hospitals, however, there was something he needed to say about preserving the health of soldiers, and prevent them from requiring his care. He sat down to compose a manifesto, and its first sentence would reverberate not only through the rest of the Revolutionary War but through every American war to come.

“Fatal experience has taught the people of America the truth... that a greater proportion of men perish with sickness in all armies than fall by the sword.”

Rush indicted Washington and the “officers of the army” for not paying enough attention to soldier wellness. He then laid out a plan that, rather than focusing on the practice of medicine by physicians, addressed what soldiers could do themselves, or what their officers could do for them, to improve their health.

Much of his advice might seem obvious today. But in 1777 it was startling news to American soldiers that they should wear their hair short; change their clothes more often, especially their socks; eat more vegetables; drink less alcohol; wash their hands and faces every day and their whole bodies several times a week; change the hay they slept on; and dry their blankets in the sun. Along with these dictums, Rush insisted that soldiers keep the area around their tents “perfectly clean of the offals of animals and of filth of all kind,” and that they avoid “unnecessary fatigue” by performing all “daily exercises... maneuvers . . . [and] also all marches . . . in the cool of the morning or evening in the summer.”

Rush recommended helping sentries stay awake at their posts by ensuring that they were properly fed, garbed, and rested, and at they were relieved often (especially “in very hot, cold, or rainy Weather”), Based on current theory that the smoke from burning wood, gunpowder, and even sulfur had “a singular efficacy in preserving and restoring the purity of the air,” and thereby prevented the spread of fevers, he recommended soldiers often be near prescriptive fires.

While most of the manifesto was advice for the soldiers themselves, at the end he returned to his call to leaders. “The Principle study of an officer, in the time of war, should be to save the blood of his men,” he wrote. “… If it be criminal in an officer to sacrifice, the lives of thousands by his temerity in a battle, why should it be thought less so to sacrifice twice their number in a hospital, by his negligence?”

It was an unprecedented piece of public health writing—a Common Sense for preventive medicine. And Rush published it as boldly as he had written it. He might have submitted it to the commander in chief or to his new superior, Dr. Shippen, so it could be quietly digested by congressional committees and incorporated into the army's orders. Instead, before he actually started work as surgeon-general of the Middle Department, he gave the text to his printer friend John Dunlap, who had been publishing his Pennsylvania Packet from a press in Lancaster.

Dunlap turned the front page of the April 22, 1777, issue over to the unsigned declaration that everyone knew had been written’ by Dr. Benjamin Rush: “Directions for preserving the HEALTH of SOLDIERS; recommended to the confederation of OFFICERS in the ARMY of the UNITED AMERICAN STATES.”

Several generals told Rush his manifesto should be published as a pamphlet that could be circulated throughout the army, and plans began to make that happen. But in the meantime, in his new job, Rush found himself fighting for the rights and health of the injured and sick soldiers. One of the military hospitals now under his supervision was in Philadelphia, was at the House of Employment building at Eleventh and Spruce. Rush began supervising and treating patients there in late April, and in early May a terrible epidemic broke out among the patients and staff—which he described as “a fatal hospital fever.” (Also called “jail fever,’ it was most likely a form of typhus.)

Symptoms of “jail fever” began, according to one of Rush's fellow doctors who contracted it, with a “listlessness of the whole body, and a peculiar sensation of the head, as if it were tightened or compressed by a hook. The “febrile attack” ran “very high in the beginning, so as to warrant bloodletting,” but after several days “the pulse begins to sink, a dry tongue, delirium and the whole train of nervous and putrid symptoms intervene…. Besides an obstinate delirium, I had a crust on my tongue as thick as the blade of a knife, and black as soot.” ‘The skin on his back and hips became so delicate and bedsore that it “wore off,” and it was “necessary to patch those parts with common plaster.” He was treated with mercury, Peruvian bark, wine, “volatile salts,” and blistering. “At the acme of my disorder,” the doctor recalled, “eleven surgeons and mates all gave me over, and only disputed how many hours I should live. Providence ordered otherwise [and] my friend, Dr. Rush, paid kind attention to me.”

Eventually he improved enough that he could start drinking, and “my tongue soon after began to moisten on the edges; and in the course of some days the whole crust fell off and left it so raw and irritable that I was obliged to hold skinned almonds in my mouth to abate the irritation.” All the hair fell off his head and skin, and when it started growing back, “instead of my former straight hair I had an entire new suit, that curled beautifully.”

Not all of Rush’s fellow doctors were as fortunate. “Several of the attending surgeons and mates died of it,” Rush recalled. Their burials were especially hard.

Desperate to keep his patients and colleagues alive, Rush reached out to Shippen and made what he believed was a perfectly reasonable request: more rooms, to isolate contagious patients from each other. “This was denied,” Rush reported, in what he described as “the beginnings of sufferings and mortality in the American army which . . . nearly destroyed it.” He was astonished that a fellow doctor, especially one with a new, broadly expanded budget, would ignore his medical advice and put soldiers at risk.