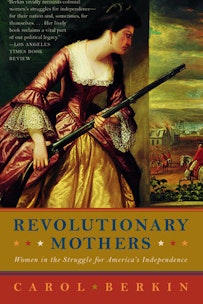 Revolutionary Mothers: Women in the Struggle for America’s Independence by Carol Berkin

Popular understandings of the American Revolution tend to overlook the contributions of women. In fact, Carol Berkin observes that just three women: Abigail Adams, “Molly Pitcher,” and Betsy Ross, are readily associated with the War. She corrects this “gender amnesia,” as she calls it, in her work, Revolutionary Mothers: Women in the Struggle for America’s Independence, in which she retells the story of the creation of the new nation through the accounts of individual women. Berkin finds that while women of various races, classes, ages, and backgrounds experienced war differently, they each played a unique and important role in the Revolution.

In this excerpt, Berkin explains how her work fits into the larger history of the American Revolution.

Revolutionary Mothers is neither a romantic tale nor an effort to stand traditional history on its head by making women the central players in the war for independence. It does not tell one woman’s story, but many, and not all of those stories end in triumph or victory. Instead, this book examines a war that continually blurred the lines between battlefield and home front, and it views that war through the eyes of the women who found themselves, willingly and unwillingly, at the center of a long and violent conflict. These women were neither generals nor statesmen. They played no formal role in declaring the war or making the peace. Yet women could hardly have been passive observers to a war waged in the streets of their towns and cities, in the fields of their family farms, or on their very doorsteps. The Revolution began with protests against taxation and a growing fear that Parliament and finally the king intended to enslave their own citizens. Women and girls were partners with their husbands, fathers, brothers, and sons in the public demonstrations against the new British policies and, if they were absent from the halls of colonial legislatures, their presence was crucial in the most effective protest strategy of all: the boycott of British manufactured goods. As the war began, women transformed peacetime domestic chores and skills into wartime activities, becoming the unofficial quartermaster corps of the Continental Army and of their state regiments. Women traveled with the army—serving the men as cooks, launderesses, and nurses. On many occasions, they took a wounded husband’s place at the cannon, and on a few occasions, they donned men’s clothing and took up arms against the enemy troops. Women were enlisted to serve as spies and couriers for the king and for revolutionaries. But more than anything else, wives and mothers and daughters kept farms and shops and families going for eight long years of conflict so that there was something to come home to when peace returned. It is these smaller acts of bravery, individual and collective, that constitute the heart of this book.