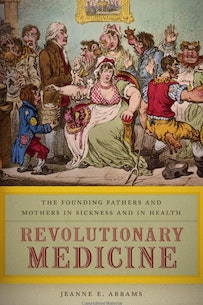 Purchase the book from NYU Press.

During the War of Independence, soldiers in the Continental Army and state militias were far more likely to succumb to disease than to the bullets or bayonets of their foes. Over the course of eight years, deadly scourges regularly threatened the lives of General Washington's men. In Jeanne E. Abrams' book, Revolutionary Medicine, we learn how Washington's efforts to prevent a smallpox outbreak amongst his troops early in the conflict represent one of the first successful American public health initiatives.

Smallpox was one of the most feared diseases of the eighteenth century. In the spring of 1776, it wreaked havoc on the American army and killed more soldiers than combat. Smallpox was a camp follower, finding fertile ground for infection during war. As an age-old popular axiom stated, 'Where soldiers go, plagues follow.' At its peak, smallpox spread like wildfire through the weakened soldiers and crowded army camps, leaving death and devastation in its wake. Many of the army recruits came from rural areas, where they had never been exposed to smallpox, making them especially vulnerable.

As commander, Washington had seen first-hand the tragic effect on both the civilian and military population, prompting him to urge his wife, Martha, to undergo smallpox inoculation, advice that she finally followed in 1776 in Philadelphia. Washington wrote his brother John from Philadelphia that 'Mrs. Washington is now under Inoculation in this City; and will, I expect, have the Small pox favourably, this is the 13th day, and she has very few Pustules; she would have wrote to my Sister but thought it prudent not to do so, notwithstanding there could be but little danger in conveying the Infection in this manner.' Martha underwent a three-week quarantine following the procedure, and Washington remained with her for about a week to keep her company in the rooms they had secured in a local lodging inn. Washington's letter demonstrates his familiarity with the course of inoculation versus contracting smallpox the 'natural' way. It also reveals the practice at the time of smoking letters to make sure the illness could not be spread through correspondence...

While Martha handled the inoculation of the family, Washington had to deal with the smallpox issue on a grand scale. Despite his early optimism, neither smallpox prevention nor quarantine had worked effectively among his troops. In 1777 alone, more than one hundred thousand people in North America died as a result of virulent smallpox epidemics. In an effort to halt the spread of the disease, Washington made the controversial decision to have all his soldiers inoculated in that year, which helped sustain the force for the rest of the Revolutionary War. In January, he declared to Dr. William Shippen, then the medical director of the Continental Army, that '[w]e should have more to dread from [smallpox] than from the Sword of the Enemy.' In April, John Adams echoed Washington's thoughts when he wrote his wife, Abigail, that 'Disease has destroyed Ten Men for Us where the Sword of the Enemy has killed one.' Adams also expressed his hope that the situation would improve as 'We have at last, determined a plan for the Sick, and have called into Service the best abilities in Physick and Chirurgery [surgery], that the Continent affords.'

In his role as commander of the forces, Washington was able to wield his governmental designated powers to mandate health intervention when he felt it benefited the public good... Still, just weeks later, Washington wavered before the daunting task of inoculating the soldiers en masse, fearing that those undergoing the procedure might spread the pestilence even further. In early February, influenced by Dr. John Morgan, the physician in chief of the American armies, Washington made a final decision to move forward as '[t]he small pox has made such Head in every Quarter that I find it impossible to keep it from spreading thro' the whole Army in the natural way. I have therefore determined, not only to inoculate all the Troops now here, that have not had it, but shall order [Doctor] Shippen to inoculate the Recruits as fast as they come in to Philadelphia.' An American congressional commission sent periodic updates on the war to Benjamin Franklin, then in France on behalf of the new American government, and they expressed their satisfaction over the mass inoculation initiated by Washington. Many American leaders, including Franklin and Washington, had shared the unfounded belief that the British deliberately spread the disease to the Continental Army as a strategic measure. The commissioners reported that '[o]ur Troops have been under inoculation from the Small Pox with great success... It will frustrate a Cannibal Scheme of our Enemies who have constantly fought us with that disease by introducing it among our troops.'

Although many soldiers were inoculated under Washington's strict orders, it is apparent that a good number also slipped through the cracks, for in the winter of 1777-1778 Washington discovered that three to four thousand of his troops had not undergone the procedure. By January 1778, the campaign to remedy the situation was in full swing. Washington's early involvement in public health resulted in major benefits to the emerging nation. According to historian Elizabeth A. Fenn, who has chronicled the great smallpox epidemics that ravaged America from 1775-1782, 'Washington's unheralded and little-recognized resolution to inoculate the Continental forces must surely rank among his most important decisions of the war.' Moreover, Washington's decision for mass inoculation within the army reflects the first 'large-scale, state-sponsored immunization campaign in American history,' making Washington a key player in early American public health endeavors.