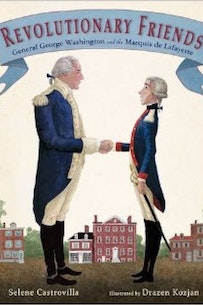 Revolutionary Friends: General George Washington and the Marquis de Lafayette, written by Selene Castrovilla and illustrated by Drazen Kozjan
Based on real events from the Revolutionary War, this children's book tells the story of the enduring friendship between George Washington and the Marquis de Lafayette. The story begins with their first meeting in the summer of 1777, and follows Washington and Lafayette as they encounter a parade in Philadelphia, review the troops together, and fight at the Battle of Brandywine-where Lafayette was wounded. Filled with full-page, color illustrations and excerpts from Lafayette's writings, this book is suitable for grades 3 and up!

C'est le moment!
Lafayette quivered with excitement. What a thrill to dine at City Tavern, among American patriots he so admired.
Was he dreaming?
Mais non.
Dreams did not offer the succulent aromas of fine dining or the sharp scent of dark ale.
This was real.
Magnifique!

Nineteen-year-old Marie-Joseph-Paul-Yves-Roch-Gilbert du Motier, Marquis de Lafayette, ventured a great deal to get there.
He had always felt a call to glory.
His heart enlisted when he learned of the Americans' struggle. The rest of his body proved more difficult.
The French king denied his request to leave.
Au contraire!
Lafayette paid for his own ship and slipped out of France, spending fifty-four stomach-wrenching days at sea.
Then he had suffered a month of broken carriages, lame horses, and nightly mosquito raids as he trekked hundreds of miles.

Here he was, finally.
And in the same room as the great George Washington.
Très bien!
City Tavern was jammed, and humming with animated voices and a steady clinking of glasses. Lafayette spotted the forty-five-year-old commander in chief immediately. Washington's figure and manner separated him from the surrounding crowd.
Lafayette had to meet him.
Maintenant!

Washington was weary. His recent days, hard.
The British lay near.
Were they readying to strike?
Washington's ragtag troops could not match the hearty redcoats.
Members of Congress badgered Washington. Why wasn't he preparing Philadelphia for attack?
Peck, peck, peck! Their voices pricked his brain. Washington was tired of sharing strategies with men deaf to reason.

Now there was someone else to consider - tonight's guest, the young Frenchman who gawked in admiration.
There was an important reason to treat Lafayette cordially. Of noble birth, he could improve relations with France-an ally America needed.
This explained why Congress had given Lafayette an honorary position in the army. No salary and no command-only a major general 's sash.
Washington was prepared to discount Lafayette. The previous French recruits had been snobbish , bossy, and unwilling to learn English. On top of it all Lafayette was scrawny and young-and inexperienced.
What possible good could he be?
Still it was in America 's best interest to invite Lafayette into Washington's military family.

Lafayette was blissfully unaware of Washington's opinions.
He had adopted the motto cur non-"why not." Having come this far, why not go further?
Lafayette was anxious to be trained and eager to communicate. He had studied English while on the rough sea.
He adored America. And because Washington represented America, Lafayette idolized him.
Washington approached.
Enchanté!
The commander complimented Lafayette on his noble spirit and the sacrifices he had made. He invited Lafayette to live in his quarters.
Voilá!
To Lafayette, the cementing of their bond was as simple as that.