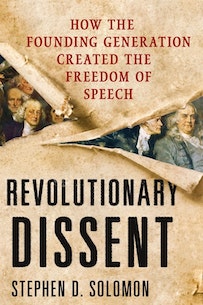 Revolutionary Dissent: How the Founding Generation Created the Freedom of Speech by Stephen Solomon

Colonial Americans redefined the limits of their right to speak and write, which they inherited from Great Britain. In Revolutionary Dissent: How the Founding Generation Created the Freedom of Speech, Stephen D. Solomon explores how Americans from the 1690s through the 1790s deployed their technology and communication networks to expand participation in political discussions. To do this, he explores the role of almost every form of colonial communication, including books, newspapers, pamphlets, broadsides, songs, sermons, plays, letters, and many others which inspired and supported the Revolution.

Solomon also takes an inclusive view of what constitutes speech. In Chapter 4, entitled, “The Shoemaker,” as he is talking about the Stamp Act protests, Solomon discusses the importance of symbols as sometimes more potent and broadly accessible than the written word.

Dedication of the Liberty Tree and its role as centerpiece of the gathering on August 14 showed how the universe of political expression was expanding. The tree, the boot, and the effigies expressed ideas in ways very different from the essays and letters and petitions that had dominated the debate until then. Unlike other forms of expression that involved words, either spoken or printed, the tree and the effigies were symbols. But they were speech nonetheless. The Loyal Nine and others who strung the effigies of the devil and the stamp distributor did so to communicate a profound disagreement with the taxes inflicted on them by England. Their use of symbols to express opposition to the new taxes involved a completely different mode of speech, but one that was ultimately as important as the essays discussing the constitutional rights of Englishmen.

Symbolic speech, in fact, possessed some power that the written and spoken word did not. The essays and speeches against the Stamp Act used complex arguments that were foreign to many people's understanding and experience, and even vigorous opponents of the tax sometimes disagreed themselves on many of the arguments they were putting forward. But symbols stripped away the complexity of intellectual arguments and offered immediate clarity. For the people of Boston and elsewhere, Liberty Trees and effigies of stamp distributors stood for one big idea - the right to be free of arbitrary power, exercised in a legislative body far away with participation of the colonists' own representatives.

That fundamental idea of being ruled over by an oppressive regime was easily grasped by everyone who gathered at the tree, whether they had ever read a pamphlet or listened to an oration. In that way, the symbols could drive home complex arguments in a simple, unified way. As the relationship between the colonies and England deteriorated over the issue of taxes, the patriots in Boston and throughout the colonies increasingly recognized the power of symbolic speech to excite passions and define public debate. It was an age of large political questions that challenged the colonists at every turn. In the arsenal of persuasion, a Liberty Tree or a burning effigy reflected the exceedingly complicated issues of rebellion.

Symbols possessed other vital attributes of effective political expression. Although they stood mute and passive, they brought immediate attention to themselves - the nectar that attracts the bees. Symbolic speech made protest popular, enabling active and visible opposition to the taxes to spread from the well-educated politicians and merchants to the community at large. The symbols employed by the Loyal Nine brought out thousands of people from Boston and surrounding towns, an essential element in the leaders' goal of showing the depth of opposition to the Stamp Act. The symbols also called for a response by those who looked on. Rather than inviting people to listen passively to harangues against the Stamp Act, the Loyal Nine created an intriguing scene that invited participation.

By their very nature, the symbols instigated even more speech. Everyone who came out to see the effigies of Oliver and the devil hanging silently from the tree couldn't help but talk with those around them about what they saw and what it meant for the future. It was an impromptu town meeting with vast participation. And many of the gatherings transformed themselves into marches, as the leaders cut down the effigies and carried them at the head of parades that often went from one end of Boston to the other and then back again, through King Street, the commercial center of town, with stops at meaningful places such as the Liberty Tree, the town gallows, and important public buildings.

For the founding generation, effective political protest meant employing many different forms of political expression toward the same goal. In fact, the law recognized symbolic speech as part of political expression. Symbolic expression had long been considered the equal of more common verbal speech in the law of seditious libel, and so the protesters around the Liberty Tree were engaging in seditious libel as surely as were the writers for the Boston Gazette. Sir Edward Coke, in his report of the se De Libellis Famosis in 1606, had regarded verbal and symbolic expression as legally equivalent, defining nonwritten libel crimes as pictures or signs, such as "a Gallows, or other reproachful and ignominious signs at the parties door or elsewhere." And William Blackstone, in his Commentaries on the Laws of England, wrote that libel involved "either printing, writing, signs, or pictures." With English common law exported to the colonies, legal commentators in America followed the lead of Coke and Blackstone, and in the fifty years following the Revolution lawyers and judges viewed freedom of expression as encompassing symbols as well as the printed and spoken word.

After the great elm in Boston proved so effective in democratizing protest, Liberty Trees found fertile soil all over the colonies. In Newport, Rhode Island, William Read donated his buttonwood tree, and deeded a parcel of land he owned around it, to the local Sons of Liberty to use for gatherings and to stand as a "Monument of the spirited and noble Opposition made to the Stamp Act." Other New England towns such as Norwich, Providence, and Cambridge dedicated trees of their own. John Adams came across a buttonwood tree in his hometown of Braintree in May 1766. "The Tree is well-set, well guarded, and has on it, an Inscription ‘The Tree of Liberty,' and 'cursed is he, who cutts this Tree.’" Adams added, with more than a hint that opposition to the Stamp Act was not unanimous, that he understood that "some Persons grumble and threaten to girdle it." Farther south, Maryland adopted a tulip tree and Savannah an oak tree, the latter dedicated as people "drank toasts to their colleagues in Massachusetts." In New York, the symbol went off in a homegrown direction as Whig leaders rejected the tree as a symbol and instead raised a tall mast to serve as a Liberty Pole, topped by a flag or vane. Everywhere people used their Liberty Trees and Liberty Poles as places to assemble to discuss politics and to hang effigies to show their displeasure.