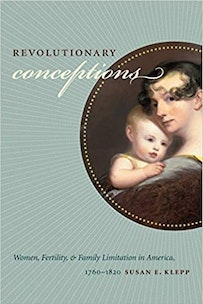 "Procreation is Power" asserts historian Susan Klepp in her study of the long-term decline of birthrates in the United States titled, Revolutionary Conceptions: Women, Fertility, and Family Limitation in America, 1760-1820.  Looking at the attitudes and practices surrounding fertility and procreation recorded in diaries, novels, letters, newspapers, and women's portraits, Klepp demonstrates the ways in which the political and social upheaval of the American Revolution ushered in new conceptions of procreation, childrearing, and womanhood.

The following excerpt discusses how the terms "virtue" and "prudence" came to be associated with women and gave way to new definitions of fertility and reproduction.

"The revolutionary debate about luxury and extravagance caused women and men to emphasize prudence. The revolutionaries called on women to enforce boycotts through nonconsumption and nonimportation. Superabundance and superfluity were under attack; restraint and self-control were promoted. As early as the 1769 nonimportation movement, as J. E. Crowley has noted, 'women played a key role in these expressions of industry and frugality because they were thought to have a determining influence on the fashions and therefore the luxury in American society. They would aid public virtue by their frugality and by their example.' Women had an opportunity to assert, along with men, their relative liberty, rationality, and civic virtue. They could overcome their presumed predilection for extravagance and mindlessly chasing the latest fashion by choosing to adopt simplicity, self-control, and restraint. Sumptuary women were mocked in street theater, public prints, newspapers, and magazines during the war, and their pregnancies, whether legitimate or not, were decried as evidence of sexual corruption. In 1778, one commentator burlesqued the 'extraordinary natural weight which some of the ladies carry before them,' referring to these women's pregnant bellies, and added, 'Most of the young ladies who Were in the city with the enemy, and wear the present fashionable dresses, have purchased them at the expense of their virtue.' The republican wife and mother, on the other hand, would mediate between the family and the state by adopting self-control and between the present and the rising generation by replicating republican virtue."

"And, just as the political term 'virtue' came to be associated with women's sexual restraint early in the Republic, so, too, did the economic virtue of 'prudence' come to be linked to women's restraint of births. The Revolution gave a national purpose to this reconfiguration of gendered expectations and held out the possibility of a more inclusive polity in which there would be a role for women. Crowley assumes a masculine subject when he writes that 'liberty depended on the individual's control over the fruits of his industry,' but women might find a parallel liberty in their prudent control over the fruits of their bodies."

"Economic ideas were changing in other ways as well. Self-interest was viewed as less of a threat to the social order under the developing market economy. Because the deliberate restriction of births had been associated with selfishness, a traditional bar to curtailed childbearing might have been lowered. However, this line of argument probably brought women too far from conventional images of selfless, charitable, and nurturing womanhood. The postrevolutionary period saw a more powerful tendency to remove women entirely from the economic realm, to make women's labor invisible, and to assign all economic value to male breadwinners. Self-interest could then operate in the economic realm dominated by men, even as virtue was preserved within women's realm. Jeanne Boydston has convincingly described this process as the pastoralization of women's work: housework was natural (not skilled), effortless (not laborious), and had no monetary equivalent (selfless and decorative, neither acquisitive nor productive). Before the Revolution, childbearing had been considered procreation and generation. After the 1780s, childbearing was described as reproduction, a process distinct from production and therefore divorced from notions of wealth. Reproduction would not be of interest to the men creating the dismal science of economics, since it had no value. Birthrates became a residual function of the structures of male economic opportunity. Demographers who sought economic motives for the fertility transition could likewise focus on men, because women were not economic actors. The shift to conceptualizing childbearing as reproduction also, as Ludmilla Jordanova has argued both 'marginalizes human agency and abstracts the process [of bearing children] from the bodies and persons involved,' while moving 'away from associating children 'naturally' with their fathers and toward associating them 'naturally' with their mothers.' The ways in which women's bodies were imagined moved both toward the world of laissez-faire economic ideas in which women were seen as individuals who were able to control their lives through rational choices and moved away from the values of the emerging industrial age, which emphasized men's (but not women's) productive, wealth-producing capacities."

"The new definitions of pregnancy that emerged during and after the Revolution were accompanied by numeracy and an emphasis on prudence in planning family size. Esther de Berdt Reed wrote to her brother in 1772: 'I have fulfilled your wish of a son [her second child]. I wish I could stop with that number, but I don't expect it.' She did have two more children before her early death, but a lack of success does not indicate the absence of a desire to establish a numeric limit to childbearing. Her ideal was a small family of two children. By 1778, her husband would mock his English in-laws for 'going on in the old patriarchal Style begetting Sons and Daughters.' Somewhat uneasily, Joseph Reed was considering restraints on his role as husband and patriarch. By 1780, as mentioned earlier, Esther Reed proposed a formal political and fiscal role for women through the appointment of 'treasuresses' on the county, state, and national levels, urging women to offer 'more than barren wishes for the success of so glorious a Revolution.' Here, feminine barrenness was not infertility; it had become a failure to exercise political influence. Her dual aspirations for all American women and for personal, parity-specific control over reproduction link the Revolution, truncated fertility, and the expansion of women's roles. When, in 1787, Sally Redwood Fisher thought her ninth pregnancy was one too many, her husband was not convinced, remarking only that 'the World would not be so well peopled as it is, if these Matters were left to the Choice of women.' But his defensive recognition that women were perceiving excessive childbearing as a burden and were capable of alternate choices was in itself an indication of changing attitudes."

"Numbers, both ordinal and cardinal, were soon joined to sentiment and suggest that a prudent sensibility was tied to the calculus of women's obligations to marriage. Harriet Manigault was bemused by the 1814 visit of ''Aunt Izard and her three tender pledges, as she never fails to call them.' Precise numbers coexisted uneasily with the sentimental language of giving pledges, although perhaps sentiment justified actions that Abigail Adams had earlier criticized as selfish. Numbers were more commonly used for the 'unselfish' purpose of calculating pity for other women through a complex factoring of age, health, number of births, and spacing of births. In 1769, Sarah Logan Fisher clucked over Peggy Howell's '6th Child before she is 29,' a calculation of too many children too fast. Ann Warder was enraged in 1786 that 'our worthy and much to be pitied sister Polly Emlen' had a 'husband who execed the desription of my Pen for Insinsibility-Her Children are presented Yearly which, keep her in constant Ill health, this with his improper example and want of resolution render the two eldest Boyes like Tyrants.' Tyranny, insensibility, a lack of self-control, and the physical damage done by annual childbearing were inseparably linked in Warder's analysis. She later added, 'What a pity if girls dont know better that there Mothers should not teach them.' For Warder, and for many other women, sensibility, self-control, and responsibility should be brought to bear on the timing and number of births as the duty of husbands, fathers, wives, and mothers."