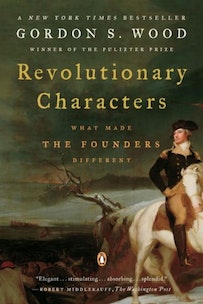 Revolutionary Characters: What Made the Founders Different by Gordon Wood

In historian Gordon Wood's book Revolutionary Characters, he proclaims Thomas Paine to be "America's First Public Intellectual." Indeed, Paine's famous pamphlet Common Sense appeared at a pivotal moment for the thirteen colonies—the debate over the value of independence had come to dominate public discussion. Paine's arguments for abolishing British claim on the colonies spread like wildfire, turning the publication into what Dr. Wood calls "the most incendiary and popular pamphlet of the entire Revolutionary era." In this excerpt, Dr. Wood parses Common Sense to explain the philosophical origins of Paine's radical thinking.

Paine had scarcely landed in the New World in November 1774 before he began writing short pieces for the newspapers, taking the American position in the imperial crisis. It was as if the first thirty years of his life, spent in poverty and obscurity and pressed close to the bottom of English society, had primed him to think like an American. At any rate, after only fourteen months in America, most of which he spent helping edit a Philadelphia magazine, Paine in January 1776 suddenly burst upon the world with his pamphlet Common Sense. His life and the world would never again be the same.

Common Sense is the most radical and important pamphlet written in the American Revolution and one of the most brilliant ever written in the English language. It went through dozens of editions and sold at least 150,000 copies, at a time when most pamphlets sold in the hundreds or a few thousand at best. Although the pamphlet, published in January 1776, did not cause Americans to think of declaring independence, it did express more boldly and eloquently than any other writing what many of them had already come to think about America's tie to the British Crown. Paine dismissed the king as the 'Royal Brute' and called for American independence immediately. 'For God's sake, let us come to a final separation...' he implored. 'The birthday of a new world is at hand...'

During his many years in England Paine had mingled in radical circles and had picked up from pamphlets and lectures a substantial understanding of the most liberal and radical thinking in the English-speaking world. Although he was not an original thinker, he did have the uncanny ability to put into readable form what others had conceived of. In Common Sense Paine may not have uttered new thoughts, but he did set forth in lucid prose much of what constituted radical, enlightened Anglo-American thinking during the last quarter of the eighteenth century. Like fellow radical Thomas Jefferson, Paine optimistically believed that every person had a natural moral or social sense that compelled him to reach out to others. Indeed, both he and Jefferson thought that the natural sociability of people might replace much of governmental authority. If only the natural moral tendencies of people to love and care for one another were allowed to flow freely, unclogged by the artificial interference of government, particularly monarchical government, Paine and other optimistic republicans believed, society would hold itself together and prosper.

Unlike liberals of the twenty-first century, Paine and other liberal-minded thinkers of the eighteenth century tended to see society as beneficent and government as malevolent... 'Society,' wrote Paine in a brilliant summary of this liberal view in the opening paragraph of Common Sense, 'is produced by our wants and government by our wickedness.' Society 'promotes our happiness positively by uniting our affections,' government 'negatively by restraining our vices.' Society 'encourages intercourse;' government 'creates distinctions.' The emerging liberal Jeffersonian view that the least government was the best was based on such a hopeful belief in the natural harmony of society.

But Paine and other liberals went further in their radicalism. In that new and better world that Paine and some other revolutionaries envisioned, war itself might be abolished. Just as enlightened liberal Americans sought a new kind of republican domestic policies that would end tyranny, so too did many of them seek a new kind of international republican politics that would promote peace among nations. Paine very much shared this enlightened international vision.

Throughout the eighteenth century, as we have seen, liberal intellectuals had looked forward to a new republican world in which corrupt monarchical diplomacy, secret alliances, dynastic rivalries, and balances of power would be abolished. Since the dynastic ambitions, the bloated bureaucracies, and the standing armies of monarchies were related to the waging of war, the elimination of monarchy promised the elimination of war. War, said Paine, 'from its productiveness, as it easily furnishes the pretense of necessity for taxes and appointments to places and offices, becomes a principal part of the system of Old Governments; and to establish any mode to abolish war, however advantageous it might to be Nations, would be to take from such Government the most lucrative of its branches.' Monarchies encourage war simply 'to keep up the spirit of the system.' The reason republics were not plunged into the waging of war was that 'the nature of their Government does not admit of an interest distinct to that of the Nation.' A world of republican states would encourage a peace-loving diplomacy, one based on the natural concert of international commerce. If the people of the various nations were left alone to exchange goods freely among themselves--without the corrupting interference of selfish warmongering monarchical courts, irrational dynastic rivalries, and the secret double-dealing diplomacy of the past--then, it was hoped, international politics would become republicanized and pacified.

'Our plan is commerce,' Paine told Americans in Common Sense, 'and that, well attended to, will secure us the peace and friendship of all Europe, because it is in the interest of all Europe to have America as a free port.' America had no need for political connections with any part of Europe. Such traditional military alliances were the legacies of monarchies, and they only led to war. 'It is the true interest of America,' said Paine, 'to steer clear of European contentions.' Trade between peoples alone would be enough to tie states together. Paine shared the view of Jefferson and Madison and other enlightened liberals that trade among the peoples of the various nations in the world corresponded to the sociability of those within each nation.

After Common Sense had established his reputation, Paine came to know nearly all the political leaders of the United States, including Washington, Jefferson, and Franklin, and he continued to write on behalf of the American cause. The most important of these writings was his American Crisis series, essays that appeared throughout the war with Britain. The most famous was the first, published on December 19, 1776, which opens with the memorable lines: 'These are the times that try men's souls: The summer soldier and the sunshine patriot will, in this crisis, shrink from the service of their country; but he that stands It now, deserves the love and thanks of man and woman.' Washington had this essay read to his troops at Christmas 1776 on the eve of their first victory at Trenton.