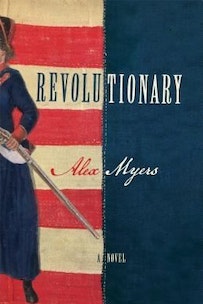 Deborah Sampson joined the Continental Army in the Fourth Massachusetts Regiment at the age of 21 disguised as a man. Enlisted as Robert Shurtliff, Sampson participated in numerous skirmishes from 1782-1783 in New York's Lower Hudson River Valley. After an illness, her secret was discovered and Sampson received an honorable discharge at West Point in 1783. Later in life, she received a pension for her military service and went on a national tour giving speeches about her wartime experiences and demonstrations of the manual of arms.

In Revolutionary, Alex Myers, a descendent of Sampson, presents a vivid, fictional account of Deborah/Robert's wartime and personal experiences during the Revolutionary War. In the following excerpt, Deborah has just run away from her home after unsuccessfully trying to enlist in the army for the first time dressed as a man. After cutting her hair and donning trousers, Deborah has taken room and board at an inn when she hears a commotion.

In April 2021, costume designer Emilio Sosa, author and Sampson descendent Alex Myers, and the Museum's Tyler Putman's explored the life and dress of Deborah Sampson, who disguised herself as a man to fight in the Revolutionary War, in a discussion co-presented by American Repertory Theater. See Content

'Just three years! It's a chance to fight the British, a chance to prove you're a man, red-blooded and hearty!'

Deborah emerged from the foyer at the rear of the inn to find a uniformed soldier standing on a table, trying to rally a small crowd of young men-some little more than boys. A harried-looking serving girl edged through with her hands full of tankards. Deborah wished that she could offer a word of sympathy-tell the girl that she knew how she must feel. Or better yet, lean close to whisper in her ear: Run away! There's a world beyond serving these louts! But first she must attend to her own destiny.

The soldier carried on: 'Cut the apron strings that tie you to your mother. Kiss your sweetheart farewell. You'll get a bounty and the gratitude of General Washington.' A few of the boys cheered at this, though whether on behalf of Washington or the money, Deborah couldn't tell. 'And it isn't like the army of old. Why, when I joined up, we hadn't shoes or blankets, but you boys ... 'The soldier's voice disappeared in the rising hubbub. Tankards were passed hand to hand, and as Deborah pressed farther into the room, she saw a man seated at the table, his ledger open near the soldier's boots, ready to write down the names of recruits.

The woman who had taken Deborah's coin earlier came over. 'You signing on, then?' She, too, carried a tray laden with mugs.

Deborah cleared her throat. 'I just came down for dinner,' she said lamely.

The woman gave her an appraising look. 'Lad like you ought to join up. Got three sons of my own, Lord help me. If you're anything like them, you'd do better taking your wild spirits far from home. Put those handsome calves to good use.' Deborah dipped her chin to hide her blush. The woman laughed and shoved into the crowd. 'I'll see about your dinner once I clear away this crew of ruffians.'

More of the boys, it seemed, had come as spectators than as potential recruits. They lifted their tankards and urged each other on as the soldier circulated, cajoling them to sign. Deborah pushed along the wall toward the hearth. A woman praising her calves-wait until she wrote to Jennie about that. The heat, the compliment, the noises of merriment about her suffused Deborah with happiness. It was good to be among people again; she had been lonely on the road.

'Here's a tall one!' Deborah turned toward the voice and saw the soldier wading over to her. He grabbed her upper arm. 'Strong, too! What do you say, lad? For God and Country?' Deborah felt the eyes of everyone in the tavern upon her. ''Come now. Sixty pounds. And by the time you return, there'll be hair on your chin.' God, she hoped not. But sixty pounds? She hadn't imagined a purse that sizable. The soldier began to pull her toward the table. 'One for your rolls, Mister Hewes!' he called.

'I'm not...' Deborah began, but the soldier raised his voice shouting out for the benefit of the room at large.

'Fair of cheek, but bold of spirit! Here's a real patriot, a son of liberty!'

She began to protest again, but then stopped. Why not? Fate had brought her to the enlistment rolls once more. It was meant to happen. She heard the buzz of the crowd behind her, like bees swarming upon rich blossoms. Sixty pounds. Her future signed away. This flight, born of fear, brought to a triumphant end. The agent dipped his quill and gave Deborah a weary look. 'At least seventeen years of age?'

'Aye.' She would show them, those men in Middleborough -Ezekiel and Mr. Wood and his clerk-she wouldn't allow them to confine her, to tell her how to live.

'Name and place of origin?'

He pushed the book and quill toward her. 'By signing you are enlisting in the Continental Army and agreeing to muster.'

The rigid forefinger of her left hand jutted out as usual and she set her tongue between her teeth, forming her letters with care; this was her first time signing her new name. Fear licked at her, lapping like a wave that threatened to engulf the shore, but as it washed over her, it felt like jumping into a pond in summer: a gasping moment of cold followed by blissful relief. She lifted the quill with a flourish. Robert Shurtliff had signed on.

The soldier dragged a few other boys to the book before the crowd in the public room began to dissipate. 'Now, then!' the soldier called out. 'Those of you who signed, gather round.' She shuffled over with a half-dozen others. 'We close our books tomorrow and muster the day after, at Lathrop's place in Worcester, where you'll receive your payment.'

'And let you piss it away at dice and drink? This way you are certain to make muster, though I remind you that you have signed and are bound by law to appear.'

Those words settled in Deborah as if she had swallowed a cold stone: bound by law.

'A round of drinks, mistress!' Once the serving woman had furnished everyone with tankards, the soldier lifted his. 'To our own Saint George, General Washington.'

They clinked and drank. The rum scorched its way down and dissolved the cold stone in her stomach. Sixty pounds would be in her pocket soon. More than that, she'd have a place to go, a purpose. She would be a soldier.

'Drink up, lads, then find yourself a girl. There won't be any where you are heading,' the soldier said.

Deborah buried her smile in her mug. There would be at least one girl.