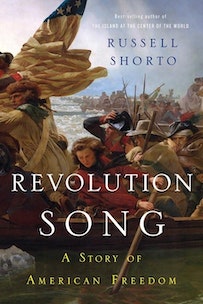 Revolution Song: A Story of American Freedom by Russell Shorto

Russell Shorto’s Revolution Song: A Story of American Freedom weaves together the life stories of six historical figures against the backdrop of the American Revolution. Through their own words, recorded in diaries, letters, and autobiographies, an intimate portrait of each of these characters emerges as the author takes the reader on a journey across borders and decades. Along the way, their stories sometimes intertwine, but the author’s goal is to examine what freedom, or more specifically individual freedom, means to six very different people.

The following excerpt comes from the “Prologue” and introduces us to the six main characters, some whose names you’ll recognize and others you’ll meet for the first time: George Washington, Lord George Germain, Cornplanter, Margaret Moncrieffe, Abraham Yates, Jr., and Venture Smith.

As the eighteenth century progressed, the focus on the individual led people to new insights, new proclamations and assertions of rights. Across Europe, a particular word was suddenly bandied about in every conceivable context. Vrijheid. Liberdade. Liberté. Svoboda. Saoirse. Freedom. Kings, armies and churches, whether you sided with them or not, all exerted power over individuals; all, in their very existence, constrained these newly assertive individuals. In country after country, people began agitating for freedom of one kind or another. The furor built through the decades until the leaders in America had the brilliant idea to package this force. They gave it a sharp political frame and turned it against the English, who had themselves been at the forefront of the freedom movement. The Americans declared that it was ‘self-evident’ that all are created equal, and that all are entitled to ‘liberty.’

The people featured in this book were part of this sweeping change. They were, like us, vibrantly aware of themselves as individuals, alive to promise and possibility in a way that previous generations had not been. But the new valuing of the individual went only so far. ‘Liberty’ had strict limits in the early American republic.

Yet people who were left out of the ‘all men are created equal’ struggle in the period of America's founding pushed forward in their own ways. The three other protagonists of this book, whose lives weave through and around those of Washington, Germain and Cornplanter, didn't lead armies, but they personified ‘revolution’ as fully as did the man who became the first president.

Venture Smith, who was born in Africa (his original name was Broteer Furro) and brought to America as a slave, embodied the complications of the struggle for freedom better than any patriot soldier. While America's leaders packaged the power of individual freedom and wove it into grand, idealistic language, it did not inspire them to end slavery. That failure led to what has probably been the greatest source of strife in American society. For many, it continues to make the project of American history feel hollow. But Venture Smith cut his own path: buying himself and his family out of slavery, acquiring land and, against all odds, fostering a community of free blacks.

The emancipation of slaves at least was a topic of debate in the eighteenth century. Women's freedom-the idea of women being independent actors, able to make their own way in life was mostly unimagined. Margaret Moncrieffe was the daughter of a military officer who chose to fight on the British side, and the whole trajectory of her life was shaped by his decision. A young woman couldn't express herself with anything like the independence that men could assert, but she clutched at one hopeful change that women were advancing just as she came of age: the rejection of forced marriage. Defying both her father and her abusive husband, however, came with a heavy price. Most of her life unfolded in London and Paris as she cycled hack and forth between high society and the depths of poverty. From today's vantage point we can see that she was trying to make it on her own. That was virtually impossible for a woman of the time, but she had tools at her disposal, including her femininity and a remarkably modern flair for self-promotion, which she employed with great skill.

We are used to seeing the American Revolution through the eyes of the elites of the period: men in powdered wigs who scratched out words of wisdom on rag paper. Like many of the founding fathers, Abraham Yates Jr., of Albany, New York, made freedom his life's work, but he stayed resolutely at street level. He was the son of a blacksmith who was relegated to the humblest of careers, that of shoemaker. He seems to have been born with a keen sense of injustice, however, a feeling that the ‘better classes’ were trampling the commoners. So he taught himself the law and rose through a succession of local political offices. He was among the first Americans to grow impatient with British rule, one of the first to bring the writings of John Locke to bear on the American situation, and among the first to join the patriot cause. But his voluminous writings have little of the loftiness of the founding fathers' documents. Instead, they are pragmatic and suspicious, always reflecting his tradesman's perspective and distrust of elites, British and American alike.

In one sense, these three people of the eighteenth century stand for others, people whose freedom was limited. But to define them in terms of issues-slavery, women's liberty, the struggle of commoners versus elites-feels too cramped. They were not representatives of groups. They were gorgeously themselves. As I researched their lives, they seemed to reject categorization; like each of us, they demanded uniqueness.