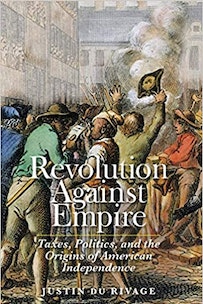 Revolution Against Empire: Taxes, Politics, and the Origins of American Independence by Justin du Rivage

In Revolution Against Empire: Taxes, Politics, and the Origins of American Independence, Justin du Rivage argues that the American Revolution was about more than the simple ‘no taxation without representation’ slogan. Essentially, he argues that the violent break between Great Britain and its colonies was the product of a fierce ideological debate taking place throughout the eighteenth century over the question of ‘what kind of empire the British Empire would become.’ In the decades leading up to the Declaration of Independence, this ideological debate regarding issues of taxation, public debt, and inequality raged on both sides of the Atlantic. The author seeks to reposition American Independence as part of this larger political debate over the fate of the British Empire by focusing on three rival political factions and their competing and incompatible visions of empire that dominated the political environments of Great Britain and its colonies from Boston to Bengal.

The following excerpt introduces the reader to the competing ideological groups who shaped and reshaped the debates as their political power waxed and waned throughout the eighteenth century.

Britain's battle over empire took place in a country that had long grappled with partisan conflict. However, by the mid-eighteenth century, the Whig and Tory parties no longer resembled their former selves. As Richard Price observed, the Tories had begun as the party of ‘court favor,’ while the Whigs contended for ‘commercial freedom.’ But George I and George II excluded the Tories from government, and this reversed the parties' traditional roles, leading to the ‘Whig creed being carried to court’ and to the ‘Tory creed having been in great measure adopted in towns and cities.’ Although Whigs did not give up their enthusiasm for parliamentary government and commerce, Tories embraced their role as opponents of ministerial power and mobilized' urban radicals. Indeed, decades of Whig dominance created a political world in which some Whigs found that they had more in common with their Tory rivals. By the 1750s, it was possible to describe a single individual, Sir Francis Dashwood, as a ‘Tory,’ an ‘independent Tory,’ a ‘Jacobite,’ and an ‘opposition Whig.’ Politics became only marginally clearer after George III became king in 1760. The new monarch vowed to rule above party and without the constraint of politicians. But his decision to rehabilitate Tories who had long been excluded from government and to make his childhood tutor Charles Stuart, third Earl of Bute, chief minister led to a splintering of the Whig Party. As new ‘proprietary’ parties formed around opposition leaders such as Lord Rockingham, William Pitt, and the Duke of Bedford, each claimed a piece of the Whig inheritance.

This blurry political scene meant that even people who nominally belonged to the same party often disagreed fiercely. For this reason, Revolution Against Empire looks beyond partisan labels and analyzes imperial politics in terms of competing ideologies. Such an approach shows that individuals throughout the British Empire shared aspirations and built alliances that extended far beyond the mother country's borders. In so doing, this book argues that three distinct groups emerged on both sides of the Atlantic: establishment Whigs, authoritarian reformers, and radical Whigs.

Establishment Whigs defended both their stewardship of parliamentary government and the concentration of wealth and influence in a small elite. They advocated commercial empire, European engagement, and a professional military funded by excise taxation and public debt. Figures like the Pennsylvania proprietor Thomas Penn believed that this fiscal-military state, while having a constitutional right to tax the colonies, should not do so lest it interfere with British trade.

The Whig establishment's approach to governance was not, however, without its critics. Many disaffected Whigs and Tories drew upon ‘country’ arguments to attack the government for its profligacy and for failing to maintain order. These authoritarian reformers sought both patriotic regeneration and the preservation of British liberty, but they made it clear that their primary political aim was to strengthen the authority of government and elites. In so doing, politicians like Virginia's future governor Francis Fauquier and political economists such as Malachy Postlethwayt insisted on fiscal austerity, arguing that Britain's endless continental wars, excessive spending, and unmitigated borrowing had put it on the path to ruin. That meant that Parliament had not just a right but an urgent obligation to tax the American colonies.

Radical Whigs also drew upon patriotic arguments to attack the Whig establishment, but they dismissed authoritarian reformers' critique of society and the economy. Drawing support from the British Empire's growing middle class, they embraced what historians such as Caroline Robbins and Gordon Wood describe as a ‘real Whig’ tradition that ‘cherished ideas’ about checks on government, individual freedom, and leveling society. They insisted that Britain's constitution existed not only to protect property from unjust taxation but also to enhance the well-being of its citizens. This is not to say that radical Whigs necessarily opposed policies that we might today consider authoritarian. American radicals endorsed seizing territory, coercing loyalists, and vesting nearly dictatorial powers in the commander in chief of the Continental Army. Yet intellectuals such as Richard Price and politicians like John Adams nonetheless pressed for a republican empire based on settlement, popular sovereignty, and a comparatively egalitarian economy.

The shifting fortunes of these ideological groups explain why Britain and its North American colonies came to blows. Yet there was nothing inevitable about a conflict between an increasingly authoritarian mother country and ever more radical colonies. Not only did nearly everyone claim to be on the side of liberty and empire, but establishment Whigs, authoritarian reformers, and radical Whigs could be found throughout the eighteenth century British world. Radicalism flourished in Boston, Bristol, and Bengal while fears of disorder and licentiousness provoked rural elites in both the Hudson Valley and the English shires. Authoritarian reformers spent decades fighting to escape the margins of British politics. In North America, radicals repeatedly clashed with authoritarian reformers, who included not only their governors but also fellow colonists. Under such circumstances, the empire's politics were highly unstable. Yet authoritarian reformers' arguments gained strength in Britain throughout the 1760s. They captured the imaginations of George III and a significant portion of the electorate, who were increasingly anxious about disorder and political dissent. Indeed, many British voters and members of Parliament embraced the project of suppressing licentiousness and shifting the burden of taxation to American colonists. Across the Atlantic, politics moved in the opposite direction. Authoritarian reform, with its goal of subordinating imperial peripheries both economically and politically, proved explosive among a colonial population that was already deeply anxious about its financial future. As radical Whigs gained strength in North America, the political culture of the British Empire became increasingly Janus-faced. The American Revolution was the result.