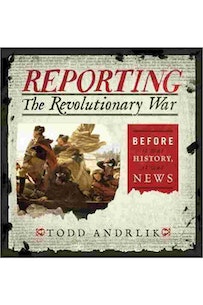 Reporting the Revolutionary War: Before It Was History, It Was News by Todd Andrlik

The Revolutionary era's newspapers are rich with stories of the major and minor conflicts that inspired the American Revolution. In Reporting the Revolutionary War, Todd Andrlik publishes an array of these fascinating news stories alongside essays by modern historians. Among them is Neal Hurst, who wrote this essay about how a British decision to confiscate gunpowder under the cover of night from Williamsburg's magazine provoked outrage and action by the city's patriots.

Williamburg was the capital of Virginia at the outbreak of the American Revolution. The city was home to many prominent Virginians who supported the cause of American liberty, including Peyton Randolph, later the president of the first Continental Congress, and George Wythe, signer of the Declaration of Independence.

After the Port of Boston's closing, the House of Burgesses called for a day of fasting, humiliation, and prayer in support of the people of Massachusetts. John Murray, the Fourth Earl of Dunmore and governor of Virginia, quickly denounced this act and dissolved Virginia's representative body. The Burgesses moved their session to the Raleigh Tavern and commenced the First Virginia Convention on August 1, 1774. Taking matters into their own hands, the Burgesses, along with merchants in the city, decided to stop importing goods from England. By the fall of 1774, independent companies formed across the colony. These men kept watch over the colony as tensions ran high and helped to enforce the nonimportation agreement. Only a month after the Second Virginia Convention and Patrick Henry's infamous "Liberty or Death" speech, Lord Dunmore made a decision that forever changed the course of the colonies' history.

On the morning of Friday, April 21, 1775, Lord Dunmore gave orders to Captain Henry Collins of the armed schooner Magdalen to remove fifteen barrels of gunpowder from the magazine at Williamsburg. Under the cover of darkness, plans were executed successfully between 3:00 and 4:00 a.m., losing only a bayonet scabbard when the sailors returned. Later that morning, the citizens of Williamsburg were outraged and immediately armed and mobilized the Independent Company.

The news of the powder being taken spread across Virginia rapidly. Editors William Hunter and John Dixon printed in their newspaper, the Virginia Gazette, an address from the mayor of Williamsburg on April 22, 1775. They wrote 'that the inhabitants of this city were this morning exceedingly alarmed by a report that a large quantity of gunpowder was in the preceding night, while they were sleeping in their beds, removed from the public magazine in this city.' The citizens requested:

...as guardians of this city, we therefore humbly desire to be informed by your Excellency, upon what motives, and for what particular purpose, the powder has been carried off [...]

Militia and independent companies across Virginia mustered and prepared to march on Williamsburg to forcibly, if necessary, take the powder back. The Pennsylvania Evening Post reported on May 9, 1775, that Mann Page Jr., Esq., rode from Fredericksburg to Williamsburg to find out if the powder was returned. The newspaper reported that the taking of the powder 'had spread general alarm, and greatly exasperated all ranks of people.' Patrick Henry publicly demanded that Dunmore either return the gunpowder or pay £330 for it. Thousands of armed men marched on Williamsburg under the command of Henry. Lord Dunmore, enraged over Henry's request, demanded his arrest. While camped at Doncastle's Ordinary, nearly fifteen miles from the capital, word was received that the governor paid the treasury for the powder. This stalled armed conflict in Virginia.

Many of the organized militia companies continued and camped in Williamsburg, setting the tone for the next several months. A continuous guard was placed on the capital and magazine. The homes of Robert Carter Nicholas, treasurer of the colony of Virginia, and Peyton Randolph were also placed under guard. News of the first shots at Lexington arrived in Williamsburg by express rider on the evening of April 28. The Revolution had already begun. The Williamsburg gunpowder incident prompted the Third Virginia Convention, which established an interim government and allowed the raising of regiments within the colony. This posture of defense allowed Virginia to prepare and organize for their first major battle against the British at Great Bridge."