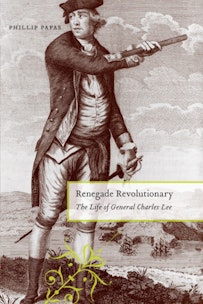 Purchase the book from NYU Press.

In the early months of the War of Independence, faith in General George Washington's leadership wavered. Among those strongly questioning Washington's strategy was his second-in-command, General Charles Lee. Lee's past experiences led him to believe that the war could be won by fighting guerilla-style, utilizing militia (or, as they were sometimes called, irregulars) rather than a centralized, formally-trained army. In this excerpt from Phillip Papas' book, Renegade Revolutionary: The Life of General Charles Lee, we see the tension building between the two generals and their very different military ideologies.

On November 30, 1776, a private letter from Lee addressed to Colonel Joseph Reed, Washington's aide-de-camp arrived at the Continentals' headquarters in New Brunswick, New Jersey. Lee thanked Reed for his 'most obliging flattering letter' of November 21, in which he had admitted that the events of the New York campaign had shaken his confidence in Washington's abilities. 'I do not mean to flatter nor praise you at the Expence of any other,' Reed told Lee, 'but I confess I do think that it is entirely owing to you that this Army & the Liberties of America so far as they are depending on it are not totally cut off... The Officers & soldiers generally have a Confidence in you—the Enemy constantly inquire where you are, & seem to me to be less confident when you are present.' Reed portrayed Washington as an indecisive leader. 'Oh! General—an indecisive Mind is one of the greatest Misfortunes that can befall an Army—how often have I lamented it with this Campaign.' Lee responded that 'fatal indecision of mind... in war is a much greater disqualification than stupidity or even want of personal courage—accident may put a decisive Blunderer in the right--but eternal defeat and miscarriage must attend the man if the best parts if curs'd with indecision.' The correspondence confirmed that by late 1776, some revolutionaries believed Lee was better suited to lead the army than Washington.

Washington had accidentally opened the sealed envelope containing Lee's letter and was stunned by its contents. Reed, one of his most trusted confidants, and Lee, his second-in-command, wanted to see him replaced. It was a harsh reality check for Washington, but rather than make a public spectacle of this private exchange, he chose to let it pass, in the interest of maintaining unity in the army. In an act of great self-restraint and character, Washington resealed the envelope and forwarded the letter to Reed with a note apologizing for mistakenly opening his private correspondence. Reed did not immediately respond. The commander-in-chief never told any of his other subordinates about the letter and never informed Lee that he knew about it.

Although Washington kept his thoughts private, Lee could not keep from publicly criticizing him, especially for the disastrous New York campaign. Lee tried to distance himself from the failed campaign and at the same time use it to advance his career at Washington's expense. In a letter to Benjamin Rush, he condemned Washington's failure to override Greene's decision to reinforce Fort Washington. 'The affair at Fort Washington cannot surprise you in Philadelphia more than it amazed and stunned me,' Lee wrote. He instructed Rush, one of his key allies in the Continental Congress, to 'keep what I say to yourself.' Yet he must have known that the talkative physician would not be able to contain his words; he exhorted him to 'acquit me of any share of the misfortune' in 'your conversations' with other delegates. 'I foresaw, predicted, all that has happened; and urged the necessity of abandoning [Fort Washington]; for could we have kept it, it was of little or no use.' Lee alleged that he had explicitly warned Washington to 'draw off the garrison [at Fort Washington], or they will be lost...'

Lee was determined to prove that he was a better soldier and commander than Washington. According to historian John Shy, 'From the time [Lee] received Reed's letter... Lee was no longer the subordinate ready to give unquestioning obedience to his commander.' Instead, Lee gave serious thought to an independent action... He planned to divide his troops into smaller units and disperse them among the civilian population. Lee felt that the presence of Continental troops among the people would send a message that they had not been forgotten. It would also help revive popular enthusiasm for the war and build confidence in the Revolution. Lee believed that the rugged terrain of Northern New Jersey was conducive to irregular warfare and hoped to coordinate guerilla operations with the New Jersey militia and roving bands of partisans that could attack British outposts, foraging and scout parties, supply depots, and local Loyalist units. Realizing the potential of the Americans as irregulars demanded a different kind of war than the one Washington envisioned... John Shy notes that Lee's strategy would have changed 'the war for independence into a genuine civil war with all its grisly attendants—ambush, reprisal, counter-reprisal.'

Washington believed that irregular forces and an army of short-term enlistments were incapable of delivering a major strike against the British... Washington did not want to depend on short-term recruits and on undisciplined and unreliable militia against the British. Washington's commitment to military professionalism reflected a fear among many leading revolutionaries that the conflict would turn into a localized war and unleash a torrent of popular violence... The revolutionaries sought to preserve their society—a society that had achieved one of the highest standards of living in the world—not to destroy it. They hoped to win their independence without risking 'the destruction of their social and institutional fabric.' Many of them, including Washington, believed that this goal could be accomplished only by turning the Continental Army into a disciplined, professional army under the control of the Continental Congress.

Lee seems to have been the only revolutionary who was willing to consciously risk societal upheaval by waging a guerilla war for independence.