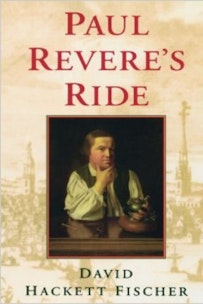 On April 18, 1775, Paul Revere set off on his famous midnight ride. While this event is iconic to most Americans, far less attention has been paid to the man himself. David Hackett Fischer set out to remedy this in his book Paul Revere's Ride, which delves into Revere's history as well as the tumultuous world he lived in. In this excerpt, we see Revere called to service on that fateful day.

Late in the afternoon of April 18, 1775, a stable boy sprinted through the busy streets of Boston. He ran from Province House off Marlborough Street to the close-built neighborhood of the North End. When he reached Paul Revere’s place he dashed through the door and announced his news—the Regulars were ready to march!

Catching his breath, the boy told Paul Revere what he knew. A friend was a hostler at a livery stable where the Regulars kept their horses. Earlier that day, several officers had gone there to work on their riding tack. As they tugged at their bridles and saddlery, they talked in low tones among themselves. From time to time, a voice rose high enough for the eavesdropping groom to hear a snatch of conversation—something about ‘hell to pay tomorrow!’

Paul Revere listened as the boy told his story, and thanked him for coming. ‘You are the third person who has brought me the same information,’ he confided. All that day, Bostonians had noticed signs of activity in the British garrison. An ‘uncommon number of officers’ were seen striding up and down Boston’s Long Wharf, and talking earnestly among themselves on the far end of the pier that extended far into the waters of Massachusetts Bay. It was the only place in town that was safe from Yankee ears...

Other signs of impending movement were also noticed by the people of Boston. Late in the afternoon, a British light infantryman was seen in a shop ‘with his accouterments on.’ As evening fell, people watched from the waterfront as the navy’s longboats began to move about the harbor, looking from a distance like small black beetles crawling across the surface of the water...

These movements were reported to Paul Revere and Joseph Warren. Only a few Whig leaders remained in Boston. Some were sitting with the Committees of Safety and Supplies in Cambridge. Others had fled in fear of arrest. John Hancock and Samuel Adams had left town several weeks earlier to attend the Provincial Congress in Concord, and had thought it prudent to remain in the country.

In their absence, Doctor Joseph Warren’s office became a clearing house for information. In the highly charged atmosphere of Boston, scarcely an hour passed without some new rumor of alarm. Doctor Warren had become highly skilled at diagnosing these political symptoms. On the afternoon of April 18, as these reports suddenly multiplied, he began to suspect that the Regulars were at last about to make the major move that had long been expected.

Doctor Warren was a careful man, and he decided to be sure. For emergencies he had special access to a confidential informer, someone well connected at the uppermost levels of the British command. The identity of this person was a secret so closely guarded that it was known to Warren alone, and he carried it faithfully to his grave.

Doctor Warren’s confidential source was someone very near the heart of the British command, and so much at risk that he—or she—could be approached only in a moment of dire necessity. As evidence of British preparations began to mount, Warren decided that such a time had come. One who knew him wrote later that he ‘applied to the person who had been retained, and got intelligence of their whole design.’ The informer reported that the plan was ‘to seize Samuel Adams and John Hancock, who were known to be at Lexington, and burn the stores at Concord...’

After hearing from his secret source, Doctor Warren sent an urgent message to Paul Revere, asking him to come at once. The time was between 9 and 10 o’clock when Paul Revere hurried across town. ‘Doctor Warren sent in great haste for me,’ Revere later recalled, ‘and begged that I would immediately set off for Lexington, where Messrs Hancock and Adams were, and acquaint them of the movement, and that it was thought they were the objects.’

Paul Revere’s primary mission was not to alarm the countryside. His specific purpose was to warn Samuel Adams and John Hancock, who were thought to be the objects of the expedition...