Passion is the Gale 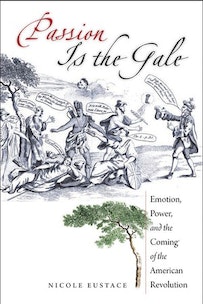 Passion Is the Gale: Emotion, Power, and the Coming of the American Revolution by Nicole Eustace

In the 18th century, love letters were not always meant for your lover's eyes only. Rather public expressions of love and affection were common during a courtship. We learn in this week's featured excerpt, that as courting men and women navigated a romantic relationship, they were also in a delicate negotiation of power.

Passion is the Gale: Emotion, Power, and the Coming of the American Revolution examines the language of emotions (such as love, anger, grief, and sympathy) in social and political relationships. Focusing on the emotional rhetoric in letters, diaries, commonplace books, sermons, political pamphlets, cartoons and newspapers, the author explores how passions evolved from the 1730s to the eve of the War for Independence in colonial Pennsylvania.

When Henry Drinker set sail from Philadelphia to attend to business in England in the winter of 1760, he left behind negotiations of a most important and delicate kind. Until the moment he was called away by demands of trade, Henry Drinker, staunch Quaker and promising merchant, had found his time consumed by the effort to persuade a certain young woman named Betsy Sandwith to become his wife. Forced to continue his courtship by correspondence, he sent frequent letters home. At the close of one such missive, Henry found that his love nearly overflowed his letter and wrote, as he sealed it, ‘I find that without a Cover there is some danger of losing a word by Wax or Wafer which word may perhaps be as a Corner Stone to my Love-Fabrick, and by losing it Sap the foundation... of a copious work.’ We might well expect that these flirtatious lines about his ‘Love-Fabrick’ were meant for the eyes of his intended, Betsy. In actuality, this epistle (which to the modern reader looks very much like a love letter) was sent, not to Betsy, but to her sister Mary instead. This poses an intriguing question: why would Henry attempt to lay the cornerstone of his love for one sister by writing a letter to the other? Strange as this procedure may seem, it was nothing out of the ordinary in the eighteenth century. In fact, the phenomenon of the public love letter was quite common.

Just two years earlier, in the autumn of 1758, another young man, William Franklin, had followed a similar procedure. Like Henry, his professional ambitions called him to England before his courtship could be brought to closure. And so William, son of Benjamin and aspirant to colonial office, also relied on correspondence in the long-distance pursuit of his marriage. From his lodgings in London he scrawled off a closely written eight-page letter so personal, it initially appears as if the ‘dear Madam’ he addressed be none other than Elizabeth Graeme, the young lady he was courting. William spoke of his hope that overseas communications could ‘raise or keep alive some soft emotions in my favor:’ In fact, the ‘Madam’ in question was, not William's Elizabeth, but one Madam Abercrombie, a married woman and a mutual friend. The stories of these courting couples provide an opening to examine the public expression, social meanings, and political implications of love, an emotion many modern readers might assume to be among the most private of all.

Close attention to the language of love and affection can highlight key intersections of personal feeling and public status in eighteenth-century British America: the peculiar phenomenon of the eighteenth-century public love letter resulted from the continuing overlap of competing notions of self. Well into the eighteenth century traditional models of the self as communal and constructed through social relations persisted alongside new models of the self as individual and autonomous. Nothing dramatizes this quite like the public avowals of private feeling common in eighteenth-century romances. Because becoming a husband or wife changed social roles as much as it did personal relationships, expressions of love meant as much for community as for identity.

Indeed, because of the intersection of public and private, declarations of affection commonly appeared not only in the course of courtship between young men and women but also in the negotiation of associations of many kinds. Most prominently, ceremonial declarations that cemented bonds between king and subjects, or between colonial governors and their assemblies, relied heavily on the language of love. Another important instance of the public use of affection came with the creation of diplomatic alliances, particularly those between Anglo-Americans and native Americans. Just as marriage was supposed to make husband and wife one flesh (and, under the system of coverture, one legal person), so the exchange of affection between ruler and ruled or between two parties to a pact helped further the fiction that their interests naturally and entirely coincided. The language of love thus worked to elide distinctions between self and society, theoretically easing the tensions between communal and individual visions of the self.

Eighteenth-century documents, from private correspondence to public records, quickly reveal the prevalence of loving language in the Enlightenment, but coming to a firm understanding of such language has long proved elusive. On the one hand, it could be argued that greater emphasis on personal affections implied increased concern for personal fulfillment, a new privileging of the need s of the individual self. This perspective is summed up by the term ‘affective individualism; ' a phrase linking the search for love to the realization of self. According to such views, the promotion of love led to the diminution of patriarchy. The problem is that emphasis on affection predated - and by no means presupposed interest in individualism. As the prevalence of public love letters shows, courtship could be romanticized without being privatized. Likewise, tying the rise of romantic love to the decline of patriarchy ignores the fact that affectionate rhetoric developed within a political system yet dominated by hereditary monarchy and within a social system in which men remained the undisputed heads of household. That loving language increased just as these customary social and political forms came under critique does not prove that love was necessarily emancipating. Despite the causal links many historians draw between the emergence of affection, the rise of individualism, and the decline of patriarchy, romantic rhetoric actually developed in defense of the very institutions it would hasten toward demise.

On the other hand, neither can the evidence fully support the opposite interpretation, that a new emphasis on love served as the basis for an emerging brand of ‘affectional authoritarianism.’ Though one might argue, in opposition to ‘affective individualism’ that the language of love arose primarily as a new tool of coercion, as the velvet glove over the iron fist, this model too comes freighted with problems. Tracing patterns in the expression of love reveals eighteenth-century Anglo-Americans engaged simultaneously in the search for personal fulfillment, the effort to assert social status, and the quest to stabilize community. Love's efficacy lay in its mutability.

Eighteenth-century expressions of love served to veil exertions of power; yet not to end them. The metaphor of the veil is crucial; while the image of shrouding suggests that men and women took interest in softening the imposition of power; it also affirms that they continued to credit its importance. In contrast to more fixed kinds of status signifiers, expressions of love and affection could mediate social interactions in creatively complex and even apparently contradictory ways. Such ambiguity had particular strategic advantages in eighteenth-century British America, a time and place in which status remained unstable and social ideals remained in flux. Like clouds that gauze without wholly covering, expressions of love and affection could both reveal and conceal, allowing simultaneously for the contestation, negotiation, and affirmation of power, whether around the tea table, in the statehouse, or at a treaty meeting.

Eighteenth-century claims of love and affection thus comprised crucial statements of social and political alignment as much as personal expressions of enamourment. The public love letters of those courtships reflected and reinforced the continuing social (and economic) stakes of marriage matches even in the face of new romantic ideals. Meanwhile, mutual expressions of devotion remained a key element of Pennsylvanians' struggles for colonial position and affiliation-whether conceived as transatlantic ties, local political links, or frontier alliances. Examining the emotions expressed in manuscript correspondence illuminates the former, and the comments in the published record can spotlight the latter. In combination, such close studies of the language of love and affection, of when, how, and by whom it was employed, can reveal the intimate eighteenth-century connections between the personal and the political, between love and power.