Of Arms and Artists 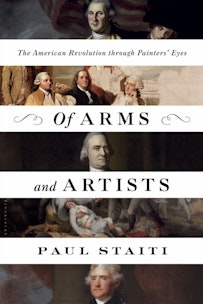 Of Arms and Artists: The American Revolution through Painters’ Eyes by Paul Staiti

If you visit the United States Capitol Building and stand in its massive rotunda, you will be surrounded by eight historical paintings. Connecticut-born artist and Revolutionary War veteran John Trumbull painted four of them. Trumbull’s paintings depict triumphant moments from the American Revolution, from the presentation of the Declaration of Independence in the Pennsylvania State House to the British surrender at Yorktown.

The following excerpt discusses Trumbull’s effort to create the paintings for the United States Capitol and their symbolic importance 50 years after the Declaration of Independence.

Feeling the spirit of 1776 and 1812, and eager to show the new national unity in a material way, congressmen-including John C. Calhoun and William Henry Harrison, both flag-waving hawks who had advocated war with Britain-voted for a resolution (114 to 50 votes in the House; 25 to 7 in the Senate) to hire Trumbull to paint four huge Revolutionary pictures-twelve feet high and eighteen feet wide. Rufus King, the Federalist senator and presidential candidate, expressed the sentiment of the moment when he reported that Trumbull found 'the Capitol a ruin.' But 'perhaps he may feel ambitious not only to restore, but like Pericles, to extend and adorn it.'

President Madison himself discussed the choice of subjects with Trumbull. They agreed to balance two military with two civil subjects. Because the pictures needed to celebrate American success in the Revolution, gruesome battle scenes of self-sacrifice were ruled out. That eliminated the Death of General Warren and the Death of General Montgomery, Trumbull's most dynamic paintings. Instead, they selected the Surrender of General Burgoyne, at Saratoga, and the Surrender of Lord Cornwallis, at Yorktown, which, unlike pictures stressing battlefield valor, highlighted the most civilized codes of warfare. The other two selections underscored civil achievement-the Declaration of Independence and General George Washington Resigning His Commission.

Using the small version from the 1780s as a model, Trumbull undertook the large Declaration first, using a new studio on Park Place, near New York's City Hall. He finished it early in 1818 and then figured out ways to multiply his good fortune by taking the 216-square-foot painting on a triumphant tour across the Northeast before its delivery in Washington, and then by selling subscriptions to the twenty-dollar engraved version to be cut by Asher B. Durand, a young printmaker.

Citizens responded to his advertisement to view the GREAT NATIONAL PAINTING; admission was set at twenty-five cents. The attendance figures were remarkable: 6,374 people came out to see it in New York. Gilbert Stuart and 6,395 others saw it in Boston's Faneuil Hall While Trumbull was in the city, Stuart painted his sixty-two-year-old friend's portrait. In Independence Hall, 5,189 braved the cold to see it in January of 1819. And in the Baltimore Court House, 2,734 visitors, including Charles Willson Peale, saw it over the course of one week. Peale thought it 'a fine picture on a difficult subject'-difficult because the faces were from '42 years past' and viewers in 1818 had trouble recognizing them. While the seventy-seven-year-old Peale was in Baltimore he painted Trumbull's portrait for his gallery of worthies.

In all, a total of 20,701 journeyed out to see the Declaration of Independence, as if they were on a pilgrimage to a holy shrine. Like a secular crèche, it reenacted the nativity of the United States, and because it was visual it had extra appeal. Seeing it for the first time, visitors could believe that 1776 had come to life before their eyes. For many, Trumbull's picture was etching history in the mind. 'There is more history in the single canvass of Mr. Trumbull's Declaration of Independence,' wrote one Republican weekly, 'than can be crowded into a folio of descriptive history ... Painting can show you things themselves.' Praise for the picture showered down on Trumbull like nothing he had previously experienced during his career. A New York newspaper said that 'no inhabitant of this country can view it without experiencing a deep sense of the hazards which the members of that illustrious assembly thus voluntarily assumed of the anxiety, the sufferings, and the triumphant success.' The American Mercury went farther: 'We gaze, then, with a degree of rapture on the exhibition...Every American ought to view this painting, and take his wife and children to see it.'

“Trumbull delivered the painting to the Capitol on February 16, 1819. The Surrender of Lord Cornwallis was delivered in November of 1820; the Surrender of General Burgoyne in March of 1822; and General George Washington Resigning His Commission in 1824. They were all majestically installed with gilt-trimmed frames in the newly completed Capitol Rotunda in 1826, on the fiftieth anniversary of the Declaration of lndependence. This was now the symbolic center of the United States.

For all the praise, public criticisms predictably emerged, especially regarding the Declaration, over whether the interior had been decorated inaccurately and why twelve of the original delegates to the Continental Congress had been omitted. If George Clinton, Benjamin Rush, and George Clymer had not signed the document, they should not have been in the picture when Caesar Rodney had been excluded. Some wondered, correctly, whether the painting depicted the actual signing, clearly forgetting that Trumbull had commemorated the Committee of Five's submission of the document on June 28, 1776. One critic identified only as 'Detector' flatly stated that the picture 'is certainly no representation of the Declaration of Independence.' In fact, the errors, 'with which it abounds, ought to exclude it from the walls of the capitol, where its exhibition will hereafter give to the mistake of the artist the semblance and authority of historical truth.'

Like other critics, this one felt that the proper goal of depicting the Revolution was 'to hand to posterity correct resemblances of the men who pronounced our separation from Great Britain,' not to indulge 'the fancy of the painter.' Unfortunately, in his eyes the 'Great National Picture' by Trumbull 'sinks from the grade of a great historical painting into a sorry, motley, mongrel picture, where truth and fiction mingle, but cannot be discriminated.' As soon as it was installed in Washington, the critic continued, the picture will become a public 'satire,' a kind of buffoon rendition 'of our own history.'

Those questions were versions of the single overarching query as to whether the Declaration of Independence was sufficiently accurate for viewers to feel confident putting their patriotic faith in it, or should it be viewed as a dramatization of 1776. While those were legitimate commentaries, the most penetrating observations about Trumbull's project came from someone who knew what had really occurred: John Adams.