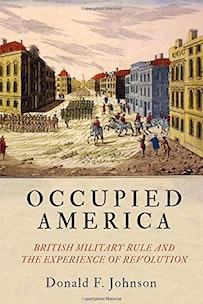 In Occupied America: British Military Rule and the Experience of Revolution, Donald F. Johnson tells us about how men and women experienced life under British military occupation in port cities – Boston, New York, Newport, Philadelphia, Savannah, and Charleston – between 1775 and 1783. Many people – especially women and the enslaved but also free men both rich and poor – initially saw the presence of British soldiers as a chance to reinvent their lives and take risks in an exceptional social atmosphere. As months turned into years, however, everyday encounters with military occupation in work and play forced Americans to grapple with their allegiances in intensely personal ways, which influenced larger outcomes of the American Revolution.

Sometimes, amid all this tumult and drama, people needed a break. As people sought entertainment during the Revolutionary War, the British military occupation influenced the theatrical scenes that Americans saw on (and off) stage. As we consider modern American traditions like stage performances, school plays, holiday concerts, and ballets, we can look back to how earlier Americans experienced the theater and explore how their world might parallel today's entertainments – both in person and online.

Cozy up at home for unexpected stories and virtual experiences for the whole family during winter break with the Museum. See Content

In this excerpt, explore how theater-goers in Philadelphia and New York leveraged their loyalties to create new traditions.

Military theater, officers’ and gentlemen’s clubs, and a vibrant party scene became sites of interactions and understanding between officers and well-to-do civilians, in which civilians wielded more and more power. For those of more modest means, street and tavern life, drinking, and practices of desertion and evasion of military authority united common soldiers and ordinary townspeople. As military personnel and civilians came together to form a unique society, opportunities and dangers abounded for both.

Some of these interactions took place on a literal stage. In each occupied town, military officers organized acting troupes, in which they performed for one another and for the entertainment of prominent townspeople. In New York, British officers organized a vibrant theater scene that lasted through the entire seven-year occupation. Officially a charity for army widows and orphans, the “Theatre Royal” mainly functioned as a place for officers to display their gentility and refinement and a venue for wealthy New Yorkers and British officers to socialize. Theater seasons ran from winter through early spring, with biweekly or monthly offerings, and performances drew a wide variety of people. At its peak, the popular comedy The West Indian drew an audience of nine hundred in January 1778.  Although officers took on most roles, local men and women participated as well, especially in the female parts. For the season-opening production of Henry Carey’s Chrononhotonthologos in 1779, a newspaper advertisement boasted that all of the female parts would be portrayed by “young Ladies and grown Gentlewomen, who never appeared on any Stage before.” Often, the women who took these roles were reputed to be officers’ mistresses, such as a “Mrs. Williams,” who played many roles in 1778 and 1779, including Desdemona in Othello and Charlotte in The West Indian. Despite its charitable pretenses, the Theatre Royal put on lavish public entertainments, complete with expensive costumes, opulent boxes for which high-ranking officers and civilians paid hundreds of pounds sterling, and a cadre of civilian ticket takers, caterers, and boxkeepers to serve the actors and their audience. The accounts of the theater demonstrate that, despite incomes of around £4,000 in ticket sales in both 1778 and 1779, it never donated more than £220 to the widows’ and orphans’ funds, with the rest going toward “expenses.” As the occupation of New York wore on, the Theatre Royal became a pillar of elite sociability.

While not in as grand style as that of New York, other cities possessed military theater scenes as well. In Philadelphia, which boasted perhaps the most sophisticated theater outside of New York, Major John Andre´ and other officers organized a vibrant theater company that staged sixteen performances between January and May 1778. Plays included staples of the late eighteenth-century English stage, as well as farces and two productions of William Shakespeare’s Henry IV, Part I. The company drew actors from the officer corps of various British and German regiments, with elite local women playing many of the female parts. In Savannah, military theater seems to have been more inconsistent, though officers did put on a double bill of Jane Shore and The Mock Doctor in September 1781, and possibly other plays throughout the three-year occupation. Charleston and Newport appear to have been bereft of organized military theater, though there is evidence in Charleston of civilian attempts to organize plays, which may have had cooperation from military officers.

Theater played an important role in military society during the era of the American Revolution. Organizing and acting in plays allowed officers to display their gentility and refinement, and to compete with one another in a nonlethal arena. In addition, performances, and their reception in print, represented a way for officers across the British Empire to express their political views and to weigh in on the deep political divisions in the empire without transgressing their place as servants of the king. Performing officers often added prefaces and additional scenes to the texts of plays in order to convey meaning or display authorial prowess. Plays could even mark officers’ allegiance to one particular general over another, or one philosophy of war over another. As one scholar has speculated, the performance of the play Douglas in Philadelphia on the day General Howe departed his post and Clinton assumed command of forces in North America may well have marked a shift in the officers’ loyalties and a shift from Howe’s positions of attempting reconciliation with rebels to Clinton’s advocacy of military conquest. As texts and performances rich with metaphor and ambiguity, plays allowed officers and civilians to indirectly challenge the military hierarchy while maintaining their allegiance to it. Theater in occupied cities also provided opportunities for women to assert independence and embrace the social opportunities that occupation brought. In accompanying officers to plays, women engaged in a courtship ritual within military society. Many these women did so independently of their male relations, which made such attendance not just a part of the elite marriage market but a public statement of independence and changing social conditions. The women who acted alongside British officers displayed their embrace of the new social possibilities of occupation even more publicly.