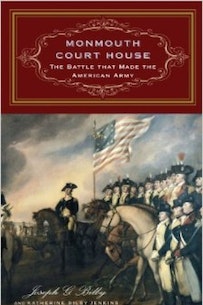 When George Washington learned the British planned to evacuate occupied Philadelphia, he had to decide whether or not to aggressively pursue the enemy. In this excerpt from Joseph G. Bilby and Katherine Bilby Jenkins' book Monmouth Court House, Washington receives opposing recommendations from his generals, who disagree on the battle-readiness of the American troops.

On June 18, [1778], George Washington received the responses he had elicited from his generals on their recommendations for a course of action when the British left Philadelphia. The consensus was that while precipitating a general engagement might prove dangerous (although Nathanael Greene said if battle came it should be accepted), the enemy should be pursued and harassed to the utmost across New Jersey. At eleven thirty that morning, Washington received a report from militia scout George Roberts that American troops had entered the now abandoned city, and that Delaware militia captain Allen McLane had already captured more than thirty British stragglers. The following day Washington issued a detailed movement plan. He ordered [General Charles] Lee's new division to lead off the march north and cross the Delaware above Trenton...

The main American army camped at Doylestown, Pennsylvania, on June 19-20, and moved on to Coryell's Ferry on June 21. Washington could not discern, at that point, what [British General Sir Henry] Clinton's exact route across New Jersey would be, but it was now apparent that the British were heading for New York City, although it seemed likely that either New Brunswick or Sandy Hook would be intermediate destinations. General [Philemon] Dickinson established militia outposts along both possible routes for intelligence gathering purposes, and the small American mounted force of dragoons under Colonel Stephen Moylan was sent to reinforce Dickinson. The following day Washington began to move his main army across the Delaware into New Jersey, reaching Hopewell on June 23...

On the morning of June 24, while the bulk of his troops rested at Cranbury, preparing for action by cleaning their muskets and cooking two days' rations, Washington called a council of war at Hopewell. His generals' opinions on a future course of action were far from unanimous. Lee, seemingly oblivious to the effect [Friedrich Wilhelm Augustus von] Steuben's reforms had on the troops, maintained that the American army (with which he actually had little familiarity since he had been a British prisoner for two years) was absolutely unable to stand up to Clinton's in any serious contest. Lee opined that Washington should limit himself to harassing the British along their way, an eighteenth-century concept known as providing an enemy with a 'bridge of gold,' or major combat-free passage out of one's territory. Lee's opinion reflected his overall strategic view of avoiding battle, withdrawing to the west and letting the French alliance win the conflict for the Americans. Generals [William] Alexander and [Henry] Knox concurred with Lee, at least in this instance, but generals [Anthony] Wayne, Greene, [the Marquis de] Lafayette, Steuben, and Brigadier General Chevalier Louis Lebègue DePresle Duportail espoused a diametrically opposed view. Lafayette, as impetuous as Lee was cautious, believed it would be 'disgraceful and humiliating' for the American army to allow the British to withdraw to New York without making them fight, and Steuben, who was more cognizant of the state of combat readiness of the American forces than anyone, agreed. These officers lobbied for aggressive offensive action against the enemy columns, which Lafayette, for one, thought could produce a decisive war-winning battle.

In the end, Washington took a middle course. The American commander ordered another force of picked men, this one more than fourteen hundred strong, selected from different regiments and under the command of Brigadier General Charles Scott, forward to harass the British left flank and rear guard as opportunity permitted... Scott's force was stiffened by the addition of four artillery pieces from the Third Continental Artillery Regiment. Fiery young Lieutenant Colonel Alexander Hamilton, as eager for a fight as Lafayette, was not satisfied with his commander's middle ground, and is quoted as saying that Washington's decision 'would have done honor to the most honorable body of midwives and to them only.' Still, the new order moved more American forces to the front and increased the likelihood of a battle in the near future.

Despite Lee's misgivings, Washington's force was indeed ready for that fight. American morale was soaring. Although the troops were still ragged and ill uniformed, they had the distinct pleasure of seeing the British withdrawing and their own army in pursuit. Seventeen-year-old Private Martin, selected for Scott's elite formation, marched through Princeton to the cheers of a crowd dispensing casks of free 'toddy.' Martin glowed in the admiration of the young women who flocked to watch 'the noble exhibition of a thousand half starved and three quarters naked soldiers pass in the review before them.' Writing more than a half century later, he recalled that 'they were all beautiful. New-Jersey and Pennsylvania ladies are, in my opinion, collectively handsome, the most so of any in the United States.' Many would still agree.

As his army reached Rocky Hill on June 25, Washington learned that the British had left Allentown and were on their way toward Monmouth Court House. He added a thousand more picked men and two artillery pieces under General Wayne to the advance, ordering Lafayette to bring that force forward, merge it with Scott's and assume command of all the American units in active contact with the enemy — which by this point was a sizeable detachment numbering almost five thousand men — and harass the enemy's left flank and rear with 'every degree of annoyance,' to cause them 'the greatest impediment and loss in their march.'