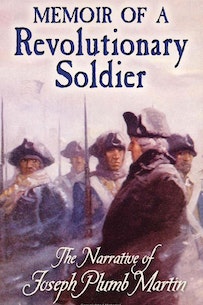 Memoir of a Revolutionary Soldier: The Narrative of Joseph Plumb Martin

Joseph Plumb Martin, a young man raised by his grandparents, left home at age 15 to serve in the Continental Army. He fought alongside important people and witnessed historic battles, chronicling them in his 1830 book, Memoir of a Revolutionary Soldier: The Narrative of Joseph Plumb Martin. It is one of the best-known Revolutionary War memoirs, depicting the life of an ordinary soldier caught up in the events of his time. In this selection, Martin describes his thoughts as he enlists and leaves the safety of home for his first deployment in 1776.

I one evening went off with a full determination to enlist at all hazards. When I arrived at the place of rendezvous I found a number of young men of my acquaintance there; the old bantering began—come, if you will enlist I will, says one, you have long been talking about it, says another—comes, now is the time. ‘Thinks I to myself,’ I will not be laughed into it or out of it, at any rate; I will act my own pleasure after all. But what did I come here for to-night? Why, to enlist; then enlist I will. So seating myself at the table, enlisting orders were immediately presented to me; I took up the pen, loaded it with the fatal charge, made several mimic imitations of writing my name, but took especial care not to touch the paper with the pen until an unlucky wight who was leaning over my shoulder gave my hand a stroke, which caused the pen to make a woful scratch on the paper. ‘O, he has enlisted,’ said he, ‘he has made his mark, he is fast enough now.’ Well, thought I, I may as well go through with the business now as not; so I wrote my name fairly upon the indentures.

And now I was a soldier, in name at least, if not in practice; —but I had now to go home, after performing this, my heroic action. How shall I be received there?—but the report of my adventure had reached there before I did. In the morning when I first saw my grandparents, I felt considerably of the sheepish order. The old gentleman first accosted me with, ‘Well, you are going a soldiering then, are you?’ I had nothing to answer; I would much rather he had not asked me the question. I saw that the circumstance hurt him and the old lady too; but it was too late now to repent. The old gentleman proceeded, — ‘I suppose you must be fitted out for the expedition, since it is so.’—Accordingly, they did ‘fit me out’ in order, with arms and accouterments, clothing and cake, and cheese in plenty, not forgetting to put my pocket Bible into my knapsack.—Good old people! they wished me well, soul and body; I sincerely thank them for their kindness and love to me, from the time I first came to live with them to the last parting hour. I hope, nay, I believe ,that their spirits now rest in the realms of bliss; —may it be my happy lot to meet them there.

I was now, what I had long wished to be, a soldier; I had obtained my heart’s desire; it was now my business to prove myself equal to my profession. Well, to be short, I went, with several others of the company, on board a sloop, bound for New-York; had a pleasant, thought protracted passage; passed through the straight called Hellgate, where all who had not before passed it, had to pay a treat, (I had been through it before;) arrive at New-York; marched up into the city, and joined the rest of the regiment that were already there.

And now I had left my good old grandsire’s house, as a constant resident, forever, and had to commence exercising my function; I was called out every morning at reveille beating, which was at daybreak, to go to our regimental parade, in Broad-street, and there practice the manual exercise, which was the most that was known in our new levies, if they even knew that. I was brought to an allowance of provisions, which, while we lay in New-York was not bad: if there was any deficiency it could in some measure be supplied by procuring some kind of sauce; but I was a stranger to such living; I began soon to miss grandsire’s table and cellar. However, I reconciled myself to my condition as well as I could; it was my own seeking, I had had no compulsion.”