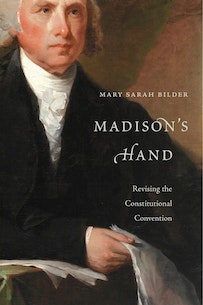 In this excerpt, Bilder discusses Madison’s personal and political evolution and his enduring ambivalence toward his Convention Notes throughout his career.

The arc of the Notes spans nearly half a century. In 1787, Madison started the Notes as a thirty-six-year-old Virginian with passionate commitments to reconfigure power of the state legislatures in order to establish a functional national government. He had no certain income or profession; the health of both parents stood between him and the inheritance of Montpelier. He was unmarried. He tended to become sick. Unlike Jefferson, he was no an antiquarian or collector. More than anything, he loved politics. The Revolution had finally ended officially only four year earlier, and the first effort at writing a constitution, the Articles of Confederation, had proved a moderate disaster. Washington and Franklin had established their fame; for Madison, reputation proved elusive. He struggled with a desire for credit, and often unacknowledged jealousy of others, and a preference for results. As a Virginian, Madison perceived himself responsible in large part for the effort to alter the Articles. But at the end of the Convention, he was dismayed, particularly by the apparent remaining power of the state legislatures. As historian Pauline Maier notes, Madison left Philadelphia “pessimistic” and “not altogether happy” with the result. Madison was uncertain of the Convention’s success and anxious about ratification.

In 1836—the year Madison died—at eighty-five years of age, he had outlived every other member of the Convention. He was, as historian Drew McCoy aptly termed him, the “Last of the Fathers.” He had authored various essays of the Federalist Papers—although precisely which ones were in dispute. He had introduced the amendments that we know as the Bill of Rights. During the 1790s, a group of one-time allies, if not quite friends, divided as Madison and Jefferson on one side and Hamilton on the other came to believe that their opponent’ success would destroy the republic. Madison had joined Jefferson in the creation of a powerful opposition Republican Party. He had served as secretary of state and eventually president. He had guided the nation through another war with Great Britain. He had stood on both sides of certain issues (the national bank and states’ rights); indeed, increasingly he found himself at odds with young southern politicians. He had been called the “Father of the Constitution” and for years fielded requests for accounts and explanations of the event and the document. He had acquired control of his letters and carefully prepared his papers. As historian Jack Rakove nicely puts it, in “his own way, he sought to enhance the heroic aura that already surrounded the Convention.” Yet Madison could not bring himself to publish his Notes in his lifetime. His decision reflected an ambivalence about the Notes that had grown deeper as he aged.