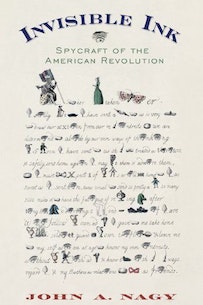 Invisible Ink: Spycraft of the American Revolution by John Nagy

The popularity of the AMC show Turn has increased awareness of the little-known spy networks that helped Washington defeat British forces during the Revolutionary War. John Nagy’s 2010 book Invisible Ink: Spycraft of the American Revolution proves that truth is often stranger than fiction, perhaps particularly when it comes to spying. A product of Nagy’s decades of searching for clues to the identities and methods of American and British covert operatives during the war, relying heavily on the under-utilized British Army papers of General Henry Clinton, Nagy’s work unveils the identity of many formerly un-acknowledged patriots and numerous crypto-loyalists. His tale includes dozens of little known spies from all walks of life - not only soldiers and officers, but women, children, enslaved people, and ordinary craftsmen those who could blend easily into crowds and appear harmless to military officers on both sides, but whose quiet operations proved crucial.

As Nagy’s title suggests, his book is also a guide to 18th-century spycraft, including the liquids used for invisible ink, the “masks” used to unveil messages in an insignificant-looking piece of correspondence. The following passage is part of a chapter on “hidden compartments” secreting information, including wall panels, shoe soles, and, in this case, buttons. The following selection focuses on the spycraft of the Quaker Darragh family of Philadelphia during the British occupation of the city in 1777 and their assistance in helping Washington prepare for what became the Battle of White Marsh on December 5, 1777.

Another method of using a hidden compartment was placing a note inside the cloth cover of a button. Covering wooden or base metal buttons with cloth that matched the coat was a fashionable practice of the time. Isaac Ogden's brother (believed to be Samuel who lived in Boonton, New Jersey) sent Christian Lownear with a message inside a button to Isaac in New York City. Lownear received two guineas for his mission.

Hiding messages in buttons was also done by the Darraghs, a Quaker family, of Philadelphia. After the British took possession of Philadelphia on September 26, 1777, General Howe occupied the house of John Cadwalader opposite the two story wooden frame residence of William and Lydia Darragh at 177 Second Street. The Darraghs attended the old Arch Street Meeting and then switched to the Free Quaker meeting. William Darragh, a school teacher, wrote messages in shorthand on small pieces of paper which were then placed between the wooden button and its cloth cover. His Dublin-born wife, Lydia, would sew the messages in the coat buttons of John, their fourteen-year-old son. Being a child, John was permitted to pass and re-pass the sentries out being stopped. Once he reached American-held ground, he went to his older brother, Charles, to deliver the messages which were hidden in his cloth-covered buttons.

General Howe's staff used the back room of the Darragh residence as an adjunct meeting space to Howe's quarters across the street. On the evening of December 2, 1777 about 7 p.m. General Howe held a staff meeting at the Darragh's house. Lydia was told the meeting would run late and "they wished the family to retire early to bed; adding, that when they were going away, they would call her to let them out, and extinguish their fire and candles." Because of the unusual request her curiosity was piqued and she "put her ear to the key-hole of the conclave." Lydia overheard General Howe's staff meeting. During the meeting the forthcoming attack on the evening of the 4th on the American troops at White Marsh was discussed. When she overheard this, she went to her room as if she had been there all evening. When the officers knocked on her door she waited for the third knock, "having feigned to be asleep."

On December 3rd she obtained a pass from General Howe to travel out of the city to get flour which was in short supply in Philadelphia as was firewood. She was able to get through the lines, and may have made this journey a number of times because the Old Swedes Mill in Frankford was popularly known as Lydia Darragh's Mill.

The American troops were ordered to stop farmers who were sneaking into the city to sell their goods for hard currency rather than accept the nearly worthless continental currency. The troops were to detain anyone leaving the city and to send them to headquarters. Most of the run-ins between the American and British patrols that were trying to slow the commuting to and from Philadelphia consisted of little more than firing some lead at each other with almost no damage. Colonel John Jameson advised Washington that the mills at Pennypack and Frankford were furnishing great quantities of flour to the British that he was powerless to stop unless he was with the men on their side of the river day and night, "as they are a set of the greatest villains I ever heard of. Many of them have received bribes to let inhabitants pass, but no proof against any but one Hood and one Reade, both of whom deserted last week.... Captain Howard took about 100 people going to market last week, mostly women.” With such a porous situation Lydia would not have had much difficulty getting to the Frankford Mill.

Adjutant General Major Baurmeister of the Hessian forces confirmed that on December 3, 1777, "the highways from Philadelphia to Germantown and Frankford, and the road to Trenton by way of Jenkintown, are open to anyone. Some Philadelphians have been appointed to give passes to loyalists, who are then permitted to pass the pickets. When returning, these people always bring foodstuffs with them. The rebel light dragoons on their horses as far as their vedettes. From these people we receive most of the news about the rebels."

Lydia left her bag at the mill and headed for the American lines to find her son. She encountered an American captain, Charles Craig of the light horse, who was on an intelligence gathering patrol and who knew her. He inquired where she was headed and she informed him that she was trying to find her son. She requested that he walk with her. He did and she informed him privately of what she heard about the forthcoming raid. The officer went to give the information to headquarters to warn General Washington. Lydia went to the mill, picked up her flour, and returned to her home in British-occupied Philadelphia.

Elias Boudinot was the Commissary General of Prisoners and he also managed some of the Continental army's intelligence mission. Boudinot stated he

"dined at a small post at the Rising Sun [Tavern] about three miles from the City [of Philadelphia). After dinner a little poor looking insignificant old woman came in and solicited leave to go into the country to buy some flour. While we were asking some questions, she walked up to me and put into my hands a dirty old needlebook, with various small pockets in it. Surprised at this, I told her to return, she should have an answer. On opening the needlebook, I could not find any thing till I got to the last pocket, where I found a piece of paper rolled up into the form of a pipe shank [stem]. On unrolling it I found that General Howe was coming out the next morning with 5,000 men, 13 pieces of cannon, baggage wagons, and 11 boats on wagon wheels. On comparing this with other information I found it true, and immediately rode post to head quarters."

Is Elias Boudinot's old woman Lydia Darragh, possibly because of exactness of the British forces and equipment? Could she have met both Boudinot and Craig? Yes, it is possible.

On December 5 when the British army arrived at White Marsh to attack, they found the Continental army well prepared. After a few skirmishes on the 6th and 7th, the British returned to Philadelphia. Although Darragh's information was not the only report of impending British attack, it did confirm other intelligence that Boudinot had received and helped Washington and the Continental army to fend off the British attack. She was read out (disowned) of meeting in October 1782 for not attending meeting and for "joining with a number of persons, associated under a pretense of religious duty, so far as to attend their meeting." Many histories claim it was for her spying ways, but it could not have had anything to do with her spying activities, which were not publicly known in 1782.