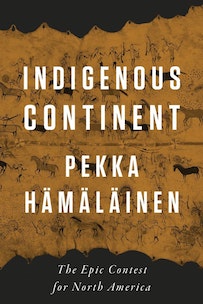 Purchase the book from W.W. Norton.

Native American nations held sway across the North American continent for centuries after the first European arrivals. By the time of the American Revolution, more than 80 nations lived east of the Mississippi River. These nations were forced to make difficult decisions regarding their territory, alliances, and their futures. During the Revolutionary War, the Haudenosaunee of New York were split, with some of their member nations supporting the British while others fought alongside the United States.

In Indigenous Continent: The Epic Contest for North America, historian Pekka Hämäläinen redraws our perception of early America, arguing that the boundaries on many European maps of the 18th century had little to do with reality. On the ground, sovereign Native American nations controlled land and held the upper hand in many international relationships. Hämäläinen’s history spans millennia and places the American Revolution in its broader, indigenous context. “Rather than a ‘colonial America,’” he argues, “we should speak of an Indigenous America that was only slowly and unevenly becoming colonial.”

This Native American Heritage Month, meet life-cast figures of Oneida people in the midst of a debate about how they will engage in the Revolutionary War. Explore Online

In late April, after the clashes at Lexington and Concord, the New England militia laid siege to Boston and its garrison. The opening of the Revolutionary War was emblematic: from the start it was a series of local wars with numerous sides. The majority of Native nations wanted nothing to do with the war, but some saw it as an opportunity to revive the strategy of playing off one colonial power against another. Some were simply swept into the conflict. Nonparticipation was almost impossible because most of the fighting took place on Indigenous land. In December 1775, the Continental Congress announced that “the Indians of St. Francis, Penobscot, Stockbridge, and Stain John’s, and other tribes, may be called on in case of real necessity, and that the giving them presents is both suitable and proper.” It was a measured gesture toward Native Americans — most of those listed were Christian Indians from small nations — but it soon became a general policy.

Accepting that they could not prevail without Indian allies, the superior Native knowledge of the terrain, and Native weapons, especially hatchets, the Patriots reached out, as most colonial powers had, to the Six Nations. Although now much reduced in number, the Iroquois were still an essential nation, owing to their moral authority and central position between the colonial East and the Indigenous West. But the Six Nations had been neutral for decades. When a British official proclaimed in early June 1776 at Fort Niagara that a British victory was inevitable and asked the Seneca war leader Flying Crow to join the British in fighting the Patriots, Flying Crow turned him down, mockingly: “If you are so strong a Brother, and they but as a weak Boy, why ask our assistance… You say they are all mad, foolish, wicked, and deceitful — I say you are so and they are wise for you want us to destroy ourselves in your War and they advise us to live in Peace.” The Six Nations would not join the war. The Seneca sachem Kayashuta put it more bluntly: “We must be Fools indeed to imagine that they regard us or our Interest who want to bring us into an unnecessary War.”

“Flying Crow’s neutrality posed a dilemma to Patriots and British alike. The Continental Congress had already agreed to seek military alliances with Native Americans, and the British needed Indigenous allies to attack and defend their forts in the Great Lakes region. The British desperately wanted to avoid draining and humiliated sieges of the kind they had faced during the Seven Years’ War and Pontiac’s War. By relying on mobile Indigenous soldiers who knew the terrain intimately, British officers hoped to create a massive protective perimeter along the frontiers of New York, Pennsylvania, western Virginia, and Kentucky. At best, the British could isolate the Continental army on the Atlantic seaboard. At a minimum, they could force George Washington, the commander in chief of the Continental army, to divide his forces. The Six Nations, the dominant Indigenous power, were critical of the British plan.

Americans could no simply force the much-diminished Indigenous nations to provide soldiers. Proportionally, mor Indians than New Englanders fought in Patriot forces in the course of the war. But the Indigenous nations of New England also displayed a subversive streak. Mohegan ministers Samson Occom and Joseph Johnson recruited followers from among the Pequots, Narragansetts, Niantics, Mohegans, and Montauks to create an independent Indigenous realm — Eeyawquittoowauconnuck, “Brothertown” — roughly a hundred miles west of Albany. Drawing a racial line between Native “brethren” on the one hand and the British on the other, Occom and Johnson hoped to secure a protected space under Oneida auspices. Occom was superficially attached to the Patriot cause, but he condemned the aggressive methods used by both the British and the Patriots to force Indians to join them: “I am Extremely Sorry to see the White People on both Sides, to use their Influence with the poor Indians to get them on their Side, I wish they would let the poor Indians alone… What have they to do with your Quarrels?” Brothertown, as both a base and a movement, boosted a growing pan-Indian resistance movement against British and American imperialism.

In the early spring of 1776, militant Iroquois, Shawnee, and Odawa women crafted enormous wampum belts — the largest was nine feet long — to invite other Native nations to war. That summer, Dragging Canoe ignored the Cherokee councils’ wariness concerning pan-Indian resistance and accepted a war belt from the Shawnees. He planned an attack against the Americans in the western counties of both Carolinas, determined to keep settlers away from Cherokee territory in the Overhill country west of the Appalachians. Chota, the capital of the Cherokee Nation — which one colonial officer dubbed “the metropolis” of Cherokee country — emerged as a military nerve center for pro-British Shawnee, Lenape, Odawa, and Mohawk armies. Dragging Canoe led five hundred soldiers across the mountains and destroyed all colonial settlements west of the southern Appalachians. A smaller Cherokee contingent took three female captives, one of whom was Daniel Boone’s teenage daughter. Instead of deterring the settlers, the attacks brought the alrger war into Cherokee country. In the late summer and fall, six thousand Virginia and South Carolina militiamen invaded Cherokee territory in the Overhill country, destroying most of its forty-three towns and forcing the eight-thousand-strong Cherokee Nation to cede lands to both states. To the west, the Muscogees and Choctaws remained neutral throughout the war and retained their territories.

After the war, the fledgling United States was far from sage, and it struggled to unite into a nation. The Revolutionary War was over, but both domestic and foreign tensions lasted. Farmers, urban laborers, and frontier settlers remained in rebellious mode, their livelihoods and security threatened by Indians that the new American state was too weak to subdue. The new central government was nearly crushed by war debt, Britain occupied multiple forts in the Ohio Country, U.S. money was nearly worthless, and there were only two roads — Braddock’s Road and Forbes Road — that reach the Trans-Mississippi West. Geopolitically, the 1783 Treaty of Paris left the United States in limbo, failing to solve nearly all of the issues that had triggered the war, and the individual states continued to pursue independent foreign policies. The double threat of Indians and British pushed the federal government to expand its fiscal and military powers. Once committed to expansion, the new republic could capitalize on its singular advantage: its explosively growing population was approaching two million. 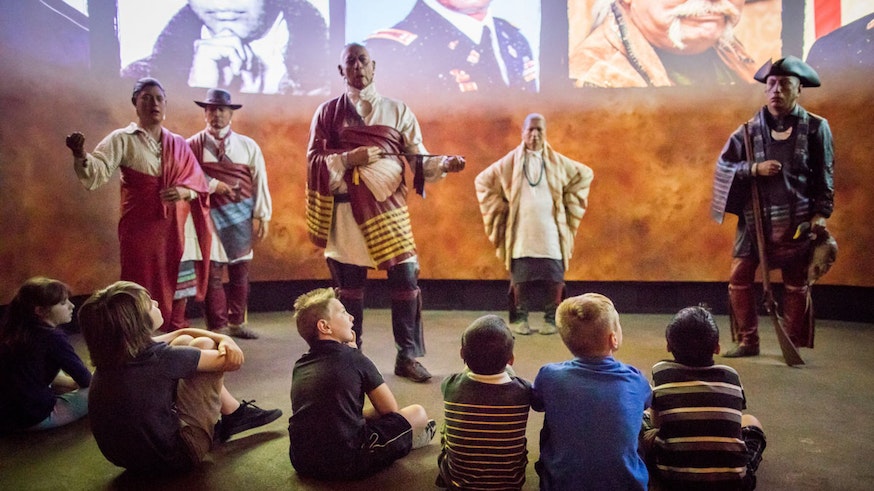 At the Museum's Oneida Nation Theater, featuring six life-cast figures and a film, meet Oneida people in the midst of a debate about how they will engage in the Revolutionary War.
Read More 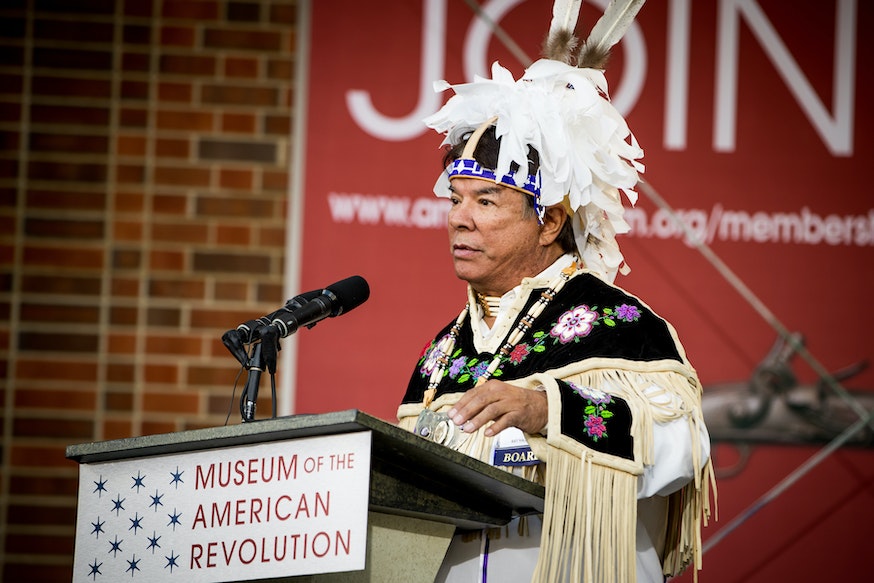 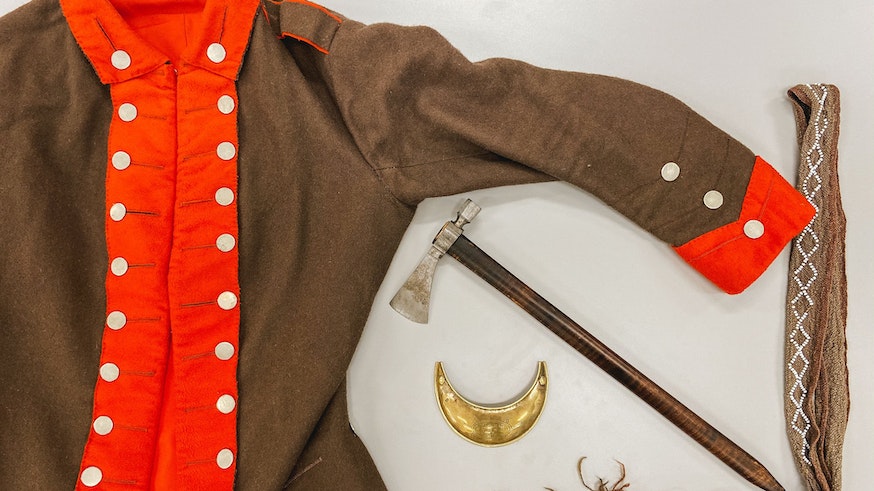