I Survived the American Revolution 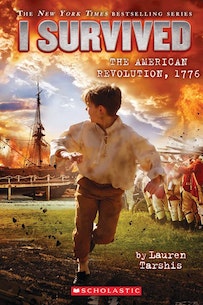 Purchase I Survived the American Revolution, 1776 by Lauren Tarshis Buy the Book

When eleven-year-old Nathaniel Fox runs away from his cruel uncle, he finds himself alone in New York City in the middle of the Revolutionary War! Young Nate soon meets an old friend and joins up with a Connecticut regiment as a camp helper. As he settles into camp life, chopping wood, digging trenches, and hauling water for the Continental Army, Nate learns more about the Revolutionary War, the Declaration of Independence, and, of course, hears stories about the feared Hessian soldiers and their deadly bayonets. Yet, Nate's courage will soon be tested as he and the Continental Army prepare for the Battle of Brooklyn.

A part of the I Survived series by author Lauren Tarshis, I Survived the American Revolution, 1776 offers young readers a thrilling story of the Revolutionary War through the eyes of a young boy.

Three days later the Connecticut 5th was ordered to Brooklyn along with six thousand other soldiers. They were all ferried across the East River on big rowboats. Nate and the men were sent to Fort Greene, one of the six Brooklyn forts. All of the forts were spread across Brooklyn Heights. That was the part of Brooklyn that was closest to New York City.

Nate hadn't realized how huge Brooklyn was. It had to be at least ten times the size of New York City. And much of the land was wild. Only a few hundred people lived in Brooklyn, and most had fled.

But this wild land was important in the war. If the British took Brooklyn, they would put their cannons on Brooklyn Heights. From there, they could blast New York City to bits.

"But we're not going to let that happen," Captain Marsh said. It was a few hours after they'd arrived at Fort Greene. Nate and the men had set up their tents inside the fort's tall dirt walls. Now Captain Marsh was explaining the American battle plan.

He showed them a map of Brooklyn and pointed out the six American forts. Then Captain Marsh pointed to a squiggly line on the map. It looked to be but one mile from Brooklyn Heights. "That's the Gowanus Heights," he said. It was a long ridge of hills.

"The British are somewhere on the other side of the ridge, and they have to cross the hills of Gowanus Heights to get to our fort. But we already have three thousand men guarding those hills. When the British try to cross... "

Paul chimed in. "We'll blast them right back to England!"

Captain March cracked a tiny smile. "Or at least back to Staten Island."

The Redcoats and Hessians who made it to the forts would face dozens of cannons. Thousands of Americans would be shooting at them from trenches, protected by the tall dirt walls.

"It will be like Bunker Hill," Samuel said with a hopeful smile.

On the night of August 26, soldiers from different companies gathered around the campfires. They roasted hunks of pork on sharpened sticks. They insulted the British and called the Hessians foul names Nate would never repeat.

To Nate, it almost seemed that the men were looking forward to a big party, not a bloody battle. They sang songs, including one that Nate had never heard before. It had a bright and catchy tune, but words that made no sense at all.

Yankee Doodle went to town, riding on a pony...

One man played along on a little twinkling flute called a fife.

Paul, Martin, and Samuel all sang along.

"What's a Yankee Doodle?" Nate asked, raising his voice up over the singing and knee slapping.

"It's what the British call us," Martin said. "They say the Americans are a bunch of Yankee Doodles, country fools who don't know how to fight."

"The British made up this song, to tease us in battle," Paul added.

"So why are we singing it?" Nate asked.

This made no sense at all.

"Because at Bunker Hill, we showed them what a bunch of Yankee Doodles can do," Samuel said. "We stole the name - and the song."

Nate smiled. Now he got it.

The Americans took the British insult - and turned it into a battle song.

The singing went on until a blaring trumpet called the men to attention.

Three men appeared. The man in the center was very tall and wore a blue uniform. The men leaped to their feet. It was General Washington!

The general stood quietly for a moment, as the men gathered around him. A hush came over the camp. Even the grumpiest and sleepiest of the men stood straight. They brushed the dust from their shirts and straightened their caps. Nate stood extra tall.

"The moment has come," General Washington began. "The enemy has landed. And now the honor and success of America depends on you."