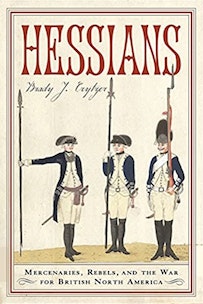 The British Crown hired soldiers from six separate "German" states to fight alongside British forces during the War of Independence, with more than half coming from Hesse-Cassel and Hesse-Hanau. In Hessians: Mercenaries, Rebels, and the War for British North America, author Brady J. Crytzer provides a look at the conflict from their perspective. Here, he shares the early experiences of Captain Johann Ewald of the 2nd Jäger Company, who joined the conflict in the fall of 1776.

"New York was a cruel welcome to the New World. Captain Johann Ewald had been on the continent for just over 24 hours, and the condition of this place spoke volumes as to the state of the rebellion in the American colonies. From his own estimation the city had over 3,000 homes, most of them well built and sturdy, but by his arrival on October 18, 1776, the streets and neighborhoods had fallen into disrepair. He had not known what to expect after his months-long voyage at sea, and as his vessel traversed the bay and ultimately the mouth of the Hudson River he and his men were prepared for anything; what they found was a country at war...

"Ewald and his men had a difficult road ahead of them after landing at New York. After a sea voyage that had cost them dozens of lives from terrible maladies such as scurvy and dysentery, however, they were all thankful to finally be on land. For the next week the Hessians remained in camp to recover from their crossing, and though there was plenty to eat they could not partake in the feasting. Over their months-long voyage their bodies had gone into a survival mode of sorts, and the limited sustenance of salted pork and stale crackers had fixed them in such a state that to dine on fresh meat and vegetables sent their bodies into a twisted, writhing pain. It was no matter to Captain Ewald, who led a soldier's life; this was the type of idle time that he loathed more than any pains of digestion.

"While the captain was new to his surroundings, his understanding of the overall mission strengthened his resolve. Since pushing the Continentals out of New York itself, [British] General [William] Howe developed a strategy to destroy Washington's army through cunning rather than brute force. Howe understood that the Americans would be pressing northward, and rather than chasing down Washington's wily force, the British commander opted to flank his opponent in a surprise assault. This maneuver entailed sailing his men, with 9,000 Hessians in tow, up the East River and landing at a point dubbed 'New Rochelle' several miles farther north than the Continental Army had yet marched. With Washington's focus on the British forces posted to his south, Howe hoped to sweep in from both sides and crush the unsuspecting Rebels.

"Encamped at New Rochelle, approximately 22 miles north of Lower Manhattan, Ewald received orders to move his men on October 23. At the outset of their march, Ewald had the privilege of parading his men before General Howe himself, which was a memorable experience for the captain in this harsh new place. It was then also that Captain Ewald was informed that he would be the lead force during the maneuver to push the Continental Army out of New York and into the cold throngs of New Jersey once and for all. This was a position that Ewald relished, not because he was a glutton for such pain but because of the reputation of his men. He was at the helm of the 2nd Jäger Company, a designation that did not come lightly. Unlike the redcoats that surrounded him in the British army, Ewald's Jägers wore a brilliant green trimmed with red. It was so unusual that their British allies and even the German immigrants they encountered referred to them as grünröcke, or Green Coats. This made for an unusual sight when his men appeared, for even his fellow Hessian infantrymen wore a distinct royal blue. The Jägers were a different sort, and their appearance was a testament to their unique abilities. As skirmishers, Ewald's rangers had the unique privilege of serving at the vanguard of the army; that is, being the first into any combat zone, and generally the last out. If William Howe was going to march anywhere in October 1776, he would rely on the Jäger Corps to lead the charge.

"The word jäger itself was not necessarily a specialized military term, for in Ewald's native German tongue it means 'hunter.' It was, however, entirely appropriate for the skill set that his unit possessed. Johann Ewald represented a specialized force in this strange New World, his was only one of two companies provided by his home of Hesse-Cassel in the fall of 1776. As a primary engagement force the Jägers would need to be crack shots, first-rate marksmen in an age where careful aim was considered to be a wasteful venture. Unlike most infantrymen who relied on volley fire in the general direction of an enemy to do damage, the Jäger Corps was selected for their ability to hit singular targets at long range. The musket utilized by most infantrymen was a careless, sloppy weapon with an effective range of less than 50 yards; the rifle used by the Jäger Corps, however, had a range of nearly twice that. Unlike the smooth-bore musket of the day, the Jäger rifle was heavier, slower to load, and required much more careful skill in aiming. Its hexagonal barrel allowed for an expert marksman to excel, and its firing range made placement behind cover a meaningful alternative to simply standing in formation.

"The weapon did have its drawbacks. The most notable was that its dramatically shorter, rifled barrel allowed no room for the placement of a standard bayonet. Because of this, the Jäger Corps would often carry blankwaffen, or short swords, to fend off enemies in close quarters. Finished off with a tricorn hat, the Jägers' appearance was stunning and unique.

"After traveling for some hours at the head of the large British column, Ewald was roused from his cold, droning march by the crackling of muskets. Immediately to his left, a party of American rangers opened fire on his company. It was a surreal scene for the Hessians. Thousands of miles from their ancestral homelands, on the other side of the world, they were engaged with an enemy in the forests of North America for the first time. Captain Ewald quickly surveyed his position and determined that there was no high ground or strategic advantage available; he would have to fight. Believing that reinforcements were coming, Ewald denied any calls for retreat but likewise restrained himself from advancing as his 2nd Company faced the enemy alone. He ordered his Jägers to form a circle, at his estimation covering an acre, and continued to engage the rebels. Minutes later, his Hessian commanding officer Colonel Carl von Donop shouted at him to retreat. Ewald retorted that to do so would guarantee a catastrophic loss of men. Donop shouted back that despite the captain's wishes, America would not be conquered in a single day. As the firefight continued, a British battalion of light infantry with two cannons appeared and unleashed several devastating volleys into the wilderness at their American foes, and it was this reinforcement that allowed Ewald's Jägers to escape the melee...

"All told, Captain Ewald tallied six dead, eleven wounded, and two captured. This exchange of fire, however, was no battle; it was merely a skirmish. The dead would have no monument, the wounded no locale to which to attach their injuries. The British soldiers who rushed forward to cover the Hessians slunk back to the safety they emerged from, and in the line of duty Ewald ordered his men in only one direction... forward."