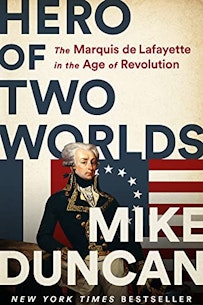 Hero of Two Worlds: The Marquis de Lafayette in the Age of Revolution by Mike Duncan

Purchase the book from PublicAffairs Books.

What is the connection between the American Revolution and France? Perhaps no one person had more impact on the answers to this historical question than Marie Joseph Paul Yves Roche Gilbert du Motier, Marquis de Lafayette. Born in 1757, orphaned by age 12 and married by age 16, Lafayette soon left France and earned his commission as a Major General in the Continental Army on July 31, 1777.

In Hero of Two Worlds: The Marquis de Lafayette in the Age of Revolution, author and podcaster Mike Duncan presents the Marquis de Lafayette as a Revolutionary soldier, stateman, idealist, philanthropist, and abolitionist who fought for causes on both sides of the Atlantic Ocean. Returning home to France as a national hero, he helped launch the French Revolution, eventually spending five years locked in dungeon prisons. After his release, Lafayette sparred with Napoleon Bonaparte, joined an underground conspiracy to overthrow King Louis XVIII, and became an international symbol of liberty. From 1824 to 1825, Lafayette’s international celebrity inspired his famous tour of the United States at the invitation of President James Monroe. Before his death in 1834, he was instrumental in the overthrow of the Bourbon Dynasty in the French Revolution of 1830.

Read an excerpt from Chapter 4: Brilliant Madness about Lafayette’s military commission in Philadelphia and his relationship to his mentor, General George Washington.

Examine the role France played in the American Revolution, who France's major players were, and additional resources to continue learning more. Read More

The day Lafayette received his commission, Congress held a dinner for Washington at City Tavern. Having just marched down with his army from New Jersey, Washington was in Philadelphia to confer with his civilian masters. Before he arrived, Washington was briefed on the appointment of the curious young French marquis. No doubt chagrined, Washington provisionally accepted the story this Frenchman was different. At the dinner, the two sat at opposite ends of the table, but afterward Washington “took Lafayette aside, spoke to him very kindly...and then told him he should be pleased if he would make the quarters of the commander in chief his home... and consider himself at all times one of the family.” Washington always referred to his circle of aides and fellow officers as his “family.” Lafayette took it to mean he was being invited into Washington’s personal household. He was thrilled by this unexpected gesture.

For Lafayette, this was a seminal moment of his life. It was the beginning of a relationship that would define him long after Washington was dead. Much has been made of the importance of the relationship, especially given the emotional subtext of the childless Washington and the fatherless Lafayette, each filling a hole in the other’s heart. For Lafayette, there was a great deal of truth to this. His first would-be surrogate, the duc d’Ayen, did not exactly pan out. Lafayette still needed a father. But Washington’s emotional needs are harder to gauge. He was surrounded by many young men in need of a father figure, and he showed no great urge to be their adoptive father. In fact, Washington’s isolating reserve and lack of personal affection were legendary. Lafayette broke through Washington’s reserve in a way those who knew the general best considered unique and unprecedented. We know, however, that on the night of July 31, 1777, George Washington had no idea how much he would come to love this young French nobleman. Lafayette, on the other hand, already anticipated a great friendship.

Washington became Lafayette’s idol, mentor, and role model. A model promising to balance many of his own impetuous behaviors. Lafayette was naturally excited and excitable. He was passionate, bouncy, intimate and friendly. These qualities endeared Lafayette to everyone he met in America. They were also traits no one used to describe George Washington. And this is exactly what Lafayette was looking for...

Lafayette spent the next few weeks bouncing between Philadelphia and Washington’s nearby headquarters. Invited to review the Continental Army, Lafayette could not help but find them poorly clothed, armed, and disciplined. The French troops stationed at Metz were the only soldiers he knew. And these men were not like those men. Self-consciously, Washington said, “We should be embarrassed to show ourselves to an officer who had just left the French army.” To which Lafayette famously replied, “I am here to learn not to teach.” Lafayette said this with evident sincerity. It was probably the first moment Washington realized Lafayette might be more than a nuisance tolerated for diplomatic reasons.

But Lafayette also spent these early weeks peppering Washington with requests for a real division to command. Washington was under the impression Lafayette’s commission was merely honorary and wrote Congress for clarification. They confirmed the appointment was honorary. They did not expect the marquis to actually command troops in battle. Washington called Lafayette into a meeting and said he would not assign him a real command, but Lafayette should still consider himself Washington’s son and friend. The commander in chief continued to mean this metaphorically. Lafayette took it literally. The orphan marquis believed he finally found a real home.

In his brief dispatch to Congress announcing the unfortunate defeat at Brandywine [in September 1777], Washington did not fail to mention “the Marquis de Lafayette was wounded in the leg.” Washington knew newspapers would publish the dispatch, flattering Lafayette’s vanity. It also spread the idea the interests of America and France were now joined in this dashing young hero, the marquis de Lafayette.

After his wound was bandaged, Lafayette headed back to Philadelphia to prepare for a general evacuation. When Lafayette reentered Philadelphia, he rejoined his erstwhile comrades from La Victoire. They were still put off by Congress and many prepared to return home. De Kalb was the only one who made any headway because he spoke English. The other French officers admired Lafayette’s exploits. One joked Lafayette’s wound would buy more advantages than his entire fortune. Now that he had what he came for—martial glory, a great adventure and an honorable but non-life-threatening wound—they suggested he come home with them. But Lafayette refused. The blood he spilled at Brandywine was not the end of the story, but the beginning. He now considered himself not just a member of the Noailles, but of the Washingtons. He could not leave now. Not when there was so much left to do.

From this proving ground beside Brandywine Creek, the legend of Lafayette, “the Hero of Two Worlds,” was born. Though tales of his exploits would grow, take on a life of their own, and culminate with enshrinement in the pantheon of American history, the legend was not grounded in fiction. It was not a literary invention. It sprang from real personal bravery, determination, and sacrifice. As he said before leaving France, “When I succeed everyone will applaud my efforts.” For anyone else, these might have been famous last words. For Lafayette, these were his opening lines. 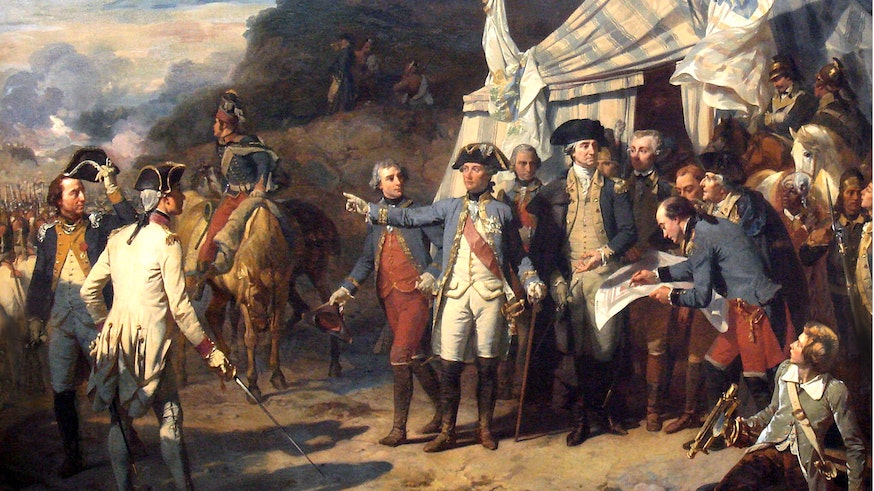 Museum of the American Revolution
Revolution Around the World

Examine the role France played in the American Revolution, who France's major players were, and additional resources to continue learning more.
Read More 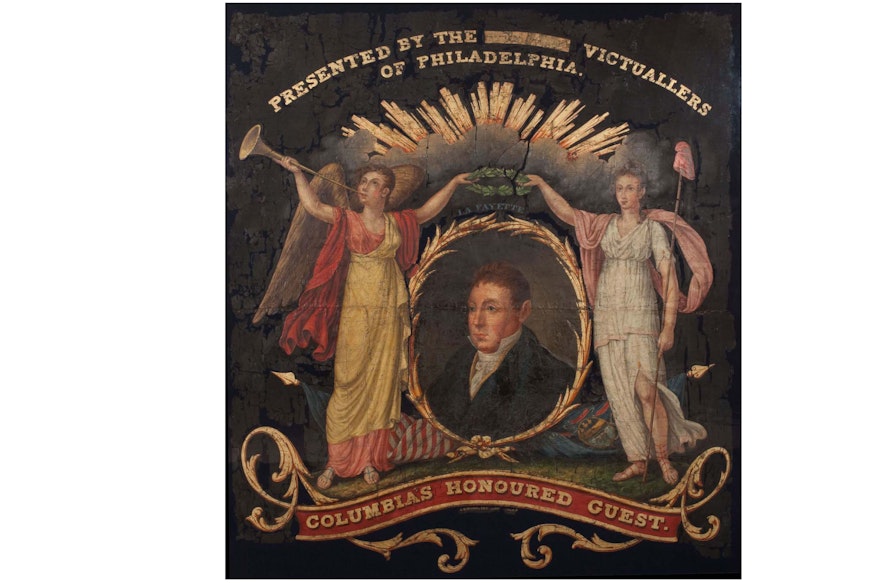 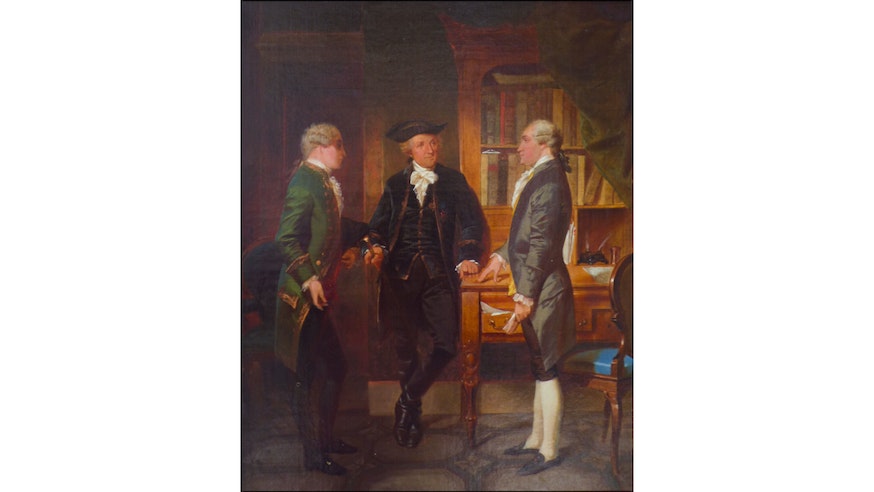