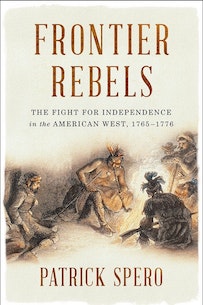 Frontier Rebels: The Fight for Independence in the American West, 1765-1776 by Patrick Spero

Many historians point to the Stamp Act in March of 1765 as one of the pivotal events that caused the American Revolution. In his recent work, Frontier Rebels: The Fight for Independence in the American West, 1765-1776, Patrick Spero turns our attention away from this more traditional, urban story of the coming of the Revolution and instead focuses on the western American frontier. He argues that in order to understand the origins of the American Revolution, we must move beyond events like the Stamp Act and study the central role the frontier played in shaping opposition against the British Empire.

Much like the city dwellers united in their protest of imperial policies and taxation, western settlers on the frontier joined in their resentment of eastern elites and tyrannical power, their fear of Native Americans, and their resistance to British attempts to restore peace after Pontiac’s War in 1763-1764. For instance, Spero points to the Black Boys’ Rebellion in 1765, when a group of Pennsylvania frontiersmen sabotaged peace treaty negotiations between the British, represented by deputy superintendent of Indian Affairs George Croghan and diplomat Robert Callender, and the Ottawa tribe, represented by Chief Pontiac. The rebellion resulted in a bloody four-year conflict that effectively catalyzed the need for revolution on the frontier.

In this excerpt, Spero describes the Black Boys’ first attack on Croghan’s caravan in western Pennsylvania.

As dawn broke, they prepared for combat. They darkened their faces with charcoal, put on their Indian outfits, and prepared their rifles. By noon, they lined the road with five pairs of men crouching behind trees sixteen feet apart. Then, they waited.

Robert Allison, Elias Davidson, and the rest of [the Pack Train] crew spent the morning of March 6 loading their cargo back onto the horses. Their goal for the day was to make it past Sideling Hill and closer to Fort Ligonier; the last before Fort Pitt.

Their brigade, as they sometimes called it, started in its march to Sideling Hall with Allison in the rear and another driver, John Sampson, in the lead.

At one o’clock, as they traveled along the hillside, the sound of gunshots filled the afternoon air. As the smoke cleared, Allison heard war cried and whoops in the Indian style and saw men with blackened faces and outfitted in Native dress prowling about the front of the train. Soon Sampson came sprinting from the front, telling that they were under attack by the locals.

Allison raced to the scene. He found horses lying dead and cargo spilled. There was so much blood from the horses that it rain into a nearby stream, turning its water red. Resident of McConnellsburg, it was later said, learned of the Black Boys’ success when ‘the rivulet…dyed with blood…ran into the settlement below, carrying with it the stain of crime upon its surface.’ At the time, there was a creek in the region that bore the name Bloody Run. There is a disagreement about the origins of that creek’s name. Some say it was names after an incident in 1755 when Indians killed a group of colonists trying to build a road. Others claim it dates to an Indian massacre of colonists and their cattle. And then there are claims it was blood from the horses the Black Boys killed in 1765. All are legitimate reasons for the creek’s name. The many different origins of the name illustrate the violence that many colonists on the frontiers of North America experienced during the previous decade of warfare, especially in the region where the Black Boys lived. When Allison arrived at the head of the cargo train, he confronted a people whose rivers had been stained with blood for a decade.

Allison surveyed the destruction and demanded an explanation.

‘Pray, gentlemen, what would you have us do?’ a report written by James Smith claims the drivers asked of the Black Boys.

‘Collect all your loads to the front, and unload them in one place; take your private property, and immediately retire,’ was their supposed reply.

Such a polite talk certainly did not happen at the base of Sideling Hall on the March afternoon. Allison, for instance, testified that the Black Boys warned him that ‘if they did not leave the Goods and go off the Ground with the Horses in 15 Minutes they would Shoot the Horses and them Afterwards.’ But there’s a truth to Smith’s recollection. Testimony from the divers confirms that the Black Boys allowed Allison and the other drivers to collect their private belongings, telling them in words very similar to Smith’s account that ‘if they pleased they might bring off…anything that belonged to them.’

When the Black Boys opened the traders’ cask, their suspicions were partially confirmed. They discovered ‘blankets, shirts, vermillion, lead, beads, wampum, tomahawks’ scalping knives, &c—some of the items the frontier people feared would strengthen Native Americans for war. Bu they found no ammunition. As Allison and his crew retreated to Fort Loudon, he turned to see the cargo go up in flames—except for several large barrels of rum, which sat untouched. The Black Boys saved the rum and let the traders collect their belongings because they wanted to send a larger message to the authorities: they weren’t a lawless mob that simply destroyed private property, but instead a lawful group that targeted specific items they considered illegal.

The drivers arrived at Fort Loudon that night. Callender, who traveled behind the leading caravan, was furious when he heard the news. This was no lawful action, he declared. It was an insult to the Crown of unimaginable proportions: an estimated sixty-three wagonloads destroyed, worth £30,000, some said, more than most men will earn in their lifetime, destroyed. The commander of the Fort, Lieutenant Charles Grant, was shocked.