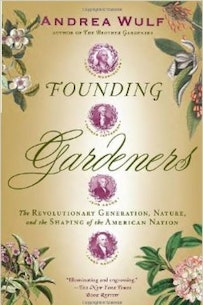 Founding Gardeners: The Revolutionary Generation, Nature and the Shaping of the American Nation by Andrea Wulf

Ordinarily when we think of the Founders like George Washington, Thomas Jefferson, James Madison, or John Adams, we picture powdered wigs and quill pens–not experimental farmers examining handfuls of manure with glee. Andrea Wulf’s, Founding Gardeners: The Revolutionary Generation, Nature, and the Shaping of the American Nation, offers us this new lens with which to view the founding generation. Through their opinions on agriculture and their vision for a nation composed of independent farmers, the founding fathers perceived brimming gardens and fertile fields as symbols of America’s prosperity and future potential.

The following excerpt introduces the founding fathers as promoters of an agrarian nation, and as farmers eagerly following the latest advances in technology, sharing new farming methods and exotic plants with each other.

As long as a man had a piece of land of his own that was sufficient to support his family, Franklin had said, he was independent. Jefferson went even further, arguing that only farmers should be elected congressmen because more than any others they were "the true representatives of the great American interest." A man who cultivated his own soil was immune to moral corruption, Jefferson said, unlike the deplorable merchants who "have no country" and therefore no real attachment to their nation. Laborers employed in manufacturing and factories would never be bound to their country as farmers who worked the soil were. "The small landholders are the most precious part of a state," Jefferson insisted, and had written into his draft for the Virginia Constitution that every free person was to be entitled to fifty acres of land (he had failed to get it passed). Madison agreed and published an article in the National Gazette declaring that the greater the proportion of husbandmen, "the more free, the more independent, and the more happy must be the society itself."

The well-tended fields of small farms became a symbol for America's future as an agrarian republic. John Adams had been the first to provide a legal base for the elevation of agriculture when he chiseled the promotion of useful arts (of which agriculture was regarded the most important) into the constitution of Massachusetts in 1779.

It was easy for Adams and Franklin to proselytize based on the idea of the independent yeoman farmer, but it was more problematic for the slave-owning Washington, Jefferson and Madison. On a political and economic level they might have been fighting for their dream of a nation of free farmers, but back at Mount Vernon, Monticello and Montpelier, hundreds of slaves were harvesting wheat and corn, working from dawn to dusk six days a week. Despite this contradiction, Washington, Jefferson and Madison still firmly believed that widespread small-scale farming in principle fostered an independent people.

With the elevation of the small farmer as the guardian of liberty, seemingly mundane tasks such as collecting manure, planting seeds and devising crop rotations became elemental parts of nation-building, and the founding fathers' political rhetoric became ever more infused with agricultural imagery. Jefferson for example said the accounts of the United States "may be, made, as simple as those of a common farmer." After a summer of happy farming, Adams told Jefferson that the "Earth is grateful ... I wish We could both say the Same of its Inhabitants." Even Washington's political motto of "slow and sure," Jefferson wrote, "is not less a good one in agriculture than in politics."

If agricultural improvements had become political acts, then experimental farmers, Madison argued, were "patriotic individuals." Every advance the founding fathers made would make America stronger and more independent. They were, as Madison quipped, "worshippers of Ceres," the Roman goddess of agriculture. Their agricultural correspondence zigzagged the country and crossed the ocean. They exchanged the latest books, shared valuable seeds of new crops, reported about the yields of their harvests and compared their experiments. Madison tried out a new species of wheat from Italy that Washington passed on to him, as well as some new varieties of beans from Mount Vernon's garden. Adams heard about a new sort of wheat and forwarded a paper describing it to the American Academy of Arts and Sciences, where he was president. He and Washington also encouraged a farmer to pursue the cultivation of a vineyard and Jefferson was so "delighted" by a new Indian corn that he packed it in his luggage on his way home to present to his friends, including Madison. On his journey into his retirement, Jefferson had acted as Washington's courier, dropping off some pecan nuts at the post office in Alexandria on his way from Philadelphia to Monticello. Madison dispatched a new crop from Jamaica ("where it forms a great proportion of the food of the Slaves") to Jefferson, and when Washington received chicory seeds from an agricultural writer in Britain, he shared them with Jefferson, who declared "it as one of the greatest acquisitions a farmer can have."

They kept up-to-date with innovative methods by reading gardening and agricultural books, mostly from Britain. In the summer of 1796, Jefferson, for example, consulted Miller's Gardeners Dictionary in order to find new species of winter vetch for his crop rotation. Washington kept a whole collection of gardening and farming books open on the table in his study, including old favorites such as the Gardeners Dictionary and the latest publications from agricultural writer Arthur Young. Whenever an American agricultural book or pamphlet was published (which was still rare), they enthusiastically bought those too. In the previous summer, for example, they had all eagerly read John Bordley's Sketches on Rotations of Crops, the first American treatise on the subject.

They were also fascinated by new agricultural technology. Threshing machines in particular excited them because for millennia farmers had separated the grains from the chaff by hand or by letting their horses trample over the wheat (neither efficient nor very hygienic, as the grain mixed with dirt and excrement). Washington had constructed an innovative sixteen-sided barn at Mount Vernon, in which horses ran in circles "treading" on the upper floor, the clean grain falling through narrow gaps onto the floor below. Washington and Jefferson had together inspected a threshing machine on a farm just outside Philadelphia, and Jefferson had become so interested that he had ordered a model from Britain through the American minister in London. Like an excited child, he had constantly updated Madison about his progress-"I expect every day to receive it," "I have not yet received my threshing machine," it had at last "arrived at New York." When he finally constructed and tried it in August 1796, it was a "great success."

That summer Jefferson was also ploughing his fields with his newly invented "mould-board of least resistance." He had a knack for mechanics and could spend years brooding over a single invention. The plough, Jefferson believed, was the most important agricultural tool, "to the farmer what the wand is to the sorcerer.” With his inveterate fondness for science, Jefferson had created a mathematically perfect moldboard. When it was finished, his slaves yoked the oxen to the plough and watched their master draw it through the red soil with ease.

While Jefferson only dirtied his hands for a scientific experiment like this, Adams stood in a pile of compost that was rising in his yard seemingly one of his most favorite spots, because no other subject was mentioned so frequently in his diary that summer. In fact, the only correspondence that Adams thought worth noting at all was a letter about a "report on manures" from Britain, which Jefferson, Madison and Washington also had received. Mundane as it seems, manure was of the greatest concern to all four of them, for one of the reasons why yields in the United States of America were declining so drastically was the lack of manuring. Since the first settlers had arrived in the early seventeenth century, American farmers had let their livestock roam freely in the forests, where they scattered their manure miles away from the fields. Over the years Adams had experimented extensively with dung, mixing it with mud, lime and seaweed, which was easily available from the nearby shore. One of the most charming images from Adams's life-and proof of how different he was from the powdered and bejeweled diplomats in Europe-was his close investigation of a manure heap just outside London. Teasing apart the straw and dung, the American Minister to the court at St. James's Palace "carefully examined" the stinking pile and clearly didn't mind the muck on his hands. He noted the exact contents and ingredients, before announcing with glee that it was "not equal to mine."