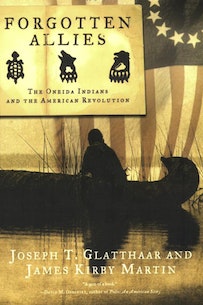 During the fight for American Independence, the native nations of eastern North America found themselves caught between "two brothers of one blood"—the British and the Patriots. Living in present-day upstate New York, most members of the Oneida Indian Nation (part of the Six Nations Confederacy) moved from neutral peacekeepers in the early days of the American rebellion to dedicated allies of the revolutionaries in its later stages. Joseph T. Glatthaar and James Kirby Martin's book, Forgotten Allies, recounts how Oneida tribal members found themselves facing increasing pressure to choose sides as the Anglo-American conflict intensified.

Full-scale rebellion pulled the Oneidas in various directions. Most felt at least a pragmatic attachment to the position of the [British] superintendent, who distributed goods to them, advised them, and communicated for them with the powerful king of England. As a counterweight of major proportions, [missionary Samuel] Kirkland had won the hearts of many Oneidas during his nine years among them. Everyone knew he favored the patriotic cause.

Traditionalists, meanwhile, concentrated at Old Oneida with a few adherents in other communities, encouraged their brethren to return to long-held customs and to reject all things European-Kirkland and the superintendent included. Unlike the Mohawks, whose territory was then being overrun, the Oneidas at Kanonwalohale, Old Oneida, and, to a lesser extent, Oriska and Oquaga, still lived far enough away from the colonists to avoid perpetual contact but near enough for occasional visits and business transactions. They had developed solid commercial and personal ties with these European Americans, a majority of whom embraced the rebellion.

Emotionally, then, most Oneidas leaned toward Kirkland and his patriot associates; from all other perspectives, however, they viewed neutrality as their best course of conduct. No one could predict the conflict's duration or severity, nor could the Oneidas anticipate how well the patriot rebels would fare against the mighty British king whose armed forces had crushed the French in Canada a decade before. Watchfulness and neutrality were the prudent choices.

In June 1775, the Oneida Nation gathered in council at Kanonwalohale to discuss its alternatives. Representing the patriot cause, the Massachusetts Provincial Congress had written the Mohawks and other Iroquois peoples, urging them to stand with the rebel side in the event of war. The Oneidas now felt pressured to build a consensus among themselves and announce their position publicly.

According to Jacob Reed, the Oneida who prepared an official statement by the 'Chiefs, headmen, Councilers, warriors, & youngmen of the Onoida [sic] nation,' they concurred that 'we are together for Peace' and 'will Exert our utmost Endeavours to keep our Brethren the Six nations and others further back from disturbing you.' Kirkland later drafted a reply to the New Englanders, which a dozen Oneida leaders signed, elaborating on the arguments that Reed recorded. 'We cannot intermeddle in this dispute between two brothers,' the Oneidas declared, feeling equal affection for all parties involved in the conflict.

The two documents revealed the depth of support for neutrality. After many discussions, every major Oneida constituency endorsed the policy. Reed's summary represented the males, while the one Kirkland prepared came from 'the Sachems, warriors, and female governesses of Oneida.' Those who signed the latter document represented all four Oneida castles and included such prominent sachems as Kanaghawaes, Shononhses, and Jimmy Tayaheure and such respected chief warriors as Skenandoah and Good Peter.

The two documents also revealed the Oneida's dismay about the imperial dispute. For outsiders, '[t]he quarrel seems to be unnatural' for 'two brothers of one blood,' the Oneidas wrote. 'The present situation of you two brothers is new and strange to us,' they stated. 'We Indians cannot find nor recollect in the traditions of our ancestors the like case or a similar instance.' In their world, family members would never act toward one another in such potentially destructive ways.

Even at the confederacy level, the Six Nations remained extremely reluctant to engage in combat with one another. The Iroquois had initially banded together first and foremost to resolve disputes and ensure peace among themselves and, then, to combine their strength for use against external enemies. In combat, however, Iroquois warriors shied away from fighting one another out of concern for injuring any of their distant kin. To strike a blow against a fellow Iroquois was an almost unthinkable act. The neutral course, then, was more than just sensible policy; it suggested the Oneidas' discomfort about supporting in any way violent clashes between British brothers.

During the challenging days ahead, the Oneidas labored diligently to maintain neutrality. Repeatedly, they proclaimed their peaceful intentions. Rumors of an imminent raid by the Six Nations, for example, triggered bolts of panic among colonists at German Flatts, causing them to toss up defensive works and scout for hostile war parties. Two Oneida messengers, Beech Tree and Thuegweyndack, tried to allay these fears. The Oneidas pledged their friendship and advised these settlers that 'they should not give ear to any false reports, for they [the Oneidas] would always give notice of any bad news.' When someone murdered a settler near Cherry Valley, and locals murmured about Oneida involvement, the nation launched its own inquiry, which concluded that none of its people had hunted or traveled in those woods that day. 'We don't think you would have suspected any of us Oneidas to have done such a thing,' the tribal investigators surmised, 'were it not for the troubles and confusions that prevail' between British and rebel partisans. They urged the colonists to 'quiet your minds, and by no means indulge any fears respecting us; and whenever we meet again, let it be in great friendship and brotherly love.'