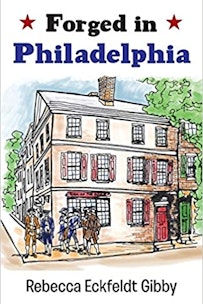 Growing up in Philadelphia, author Rebecca Eckfeldt Gibby frequently heard an intriguing story about her ancestor, Adam Eckfeldt. According to family lore, Eckfeldt produced the first coins for the United State with silver donated by Martha Washington! Was it true? Gibby’s drive to uncover the history of her Revolutionary-era ancestor led her to write this engaging work of juvenile fiction. It is a perfect holiday gift for young history lovers.

Adam made his way from the forge and through the shop, which was empty at this hour of the day. The shop was a small wooden structure between the forge and the house. Customers could enter through a door that opened onto Fifth Street. A large sign that read “The Sign of the Sickle” was nailed over the door. Inside was a broad, plank counter covered with household items left for repair. Wooden shelves on all four walls of the shop were filled with metal rings for wheels, staves to form barrels, and boxes of fireplace tools, pots, pans, nails, hinges, and latches of all sizes.

Adam worked at the blacksmith business his father, Jacob, had started upon arriving in Philadelphia in 1764. It was a growing business in a flourishing city. Now it was 1792, and the War of Independence from England had been won. Philadelphia was the capital of the government, culture, and commerce in the newly formed United States.

Adam waited impatiently at the corner of Sixth and Cherry streets. The new mint building at Seventh and Farmer’s Ally was not yet complete. An old distillery that once belonged to Michael Shubert had been purchased for use by the mint. The stillhouse had to be first dismantled and removed before the cornerstone of the mint could be laid. In the meantime, David Rittenhouse had commandeered a small machine shop owned by saw-maker John Harper to assemble the presses and castings necessary for coin production.

Adam walked home in a state of shock. I can’t quite believe it, he thought as he made his way down Arch Street. I’m not sure how I feel. On the one hand, I’m flattered to be included in this illustrious group and selected to call on the President and Lady Washington. On the other, I am terrified at the prospect of asking them to relinquish some of their treasured personal property. Even if it is for the good of the country.”

Rittenhouse explained with authority, “As you can see, one side of the coins depicts Liberty with flowing hair, facing left, with the date 1792 below. The letters ‘LIB-PAR-OF-SCIENCE & INDUSTRY’ is translated as ‘Liberty: Parent of Science and Industry.’ The reverse side bears and eagle flying left with the denomination ‘half dime’ on two lines and a five-pointed star below. The legend, ‘UNI. STATES OF AMERICA,’ encircles the eagle.